For the longest time, Western Australia’s surprisingly cosmopolitan capital was best known for its picture-perfect beaches, Mediterranean climate, laid-back lifestyle, and sheer remoteness. But riding the wave of a recently booming economy, the city now offers plenty more besides. Welcome to the new Perth.

The founding father of Western Australia, Captain James Stirling, once pronounced Perth to be the worst place to start a colony. Soon after, Karl Marx in Das Kapital described the far-flung outpost as an object lesson in how not to establish an overseas settlement.

Certainly, Perth’s first 20 to 30 years of existence were plagued with hardship. The soil along the Swan River was largely sandy and infertile, so food was difficult to grow. Founded in 1829 as a free settlement rather than a penal colony (a status that would change out of necessity in 1849), there were no convicts and thus nobody to do the backbreaking labor of building basic infrastructure that other Australian cities like Sydney had benefitted from. Adding to the list of woes were disease and discord (to put it lightly) between British settlers and the indigenous Noongar people. In fact, those early decades were so arduous that many colonists opted for the long journey home in a creaky sailing ship over the prospect of eking out a new life in this faraway place.

I’m reading this synopsis of local history from the mock-retro storyboards at the Museum of Perth, a tiny exhibition space that opened in October down a graffiti-adorned laneway off Murray Street. “Museum” is perhaps too lofty a word for it; it’s more of a cool boho cultural venue, complete with the central business district’s first vegan-friendly café. The crowdfunded venue is also a labor of love for its founders, a passionate group of likeminded locals that includes my guide, Ryan Mossny, who is leading me on one of his Two Feet & a Heartbeat walking tours.

The Karl Marx reference is the first thing I read, and I inadvertently laugh. Mossny, standing quietly next to me, says earnestly, “It’s true.” The thing is, I don’t doubt that it’s true, but there couldn’t be more of a disconnect between that 19th-century sentiment and the here and now. From where I’m standing, the resounding feeling is that the capital of Western Australia, one of the most isolated cities in the world, is now an absolute rollicking success story.

It helps that I’m staying at the city’s newest luxury hotel, COMO The Treasury. Many of my fellow Australians may have never heard of Singapore-based COMO Hotels and Resorts, but I know from stays at the group’s properties in Bali and Bhutan that Perth is in for a treat. Designed by Kerry Hill—a locally born architect renowned for his collaborations with Aman—the 48-room Treasury, with its big windows and soaring ceilings, has the kind of spaciousness that hotels in few other cities can afford. It’s also exquisitely decorated, with a nature-washed color palette complemented by Italian oak furniture, little piles of design books, and botanical artworks—a home away from home with an impeccable aesthetic.

But what makes The Treasury extra special is its starring role in the rejuvenation of downtown Perth’s historic Cathedral Square precinct. The hotel occupies one of three interconnected 19th-century buildings—now known collectively as the State Buildings—that housed various government offices during their 140-year history, until being vacated 20 years ago and left to an uncertain fate. It wasn’t until 2007 that the ambitious vision of property developer and founder of Perth’s Little Creatures brewing company, Adrian Fini, got the go-ahead. Eight years and some US$80 million later, the result—a stylishly cool inner-city eating and drinking precinct with boutique shopping and a world-class hotel—can only be described as a rare gift to Perth. 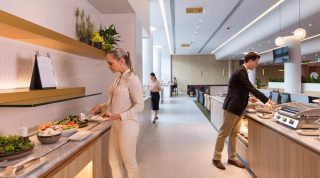