The cherry on top of it all? It houses up to 1.2 million books. For bibliophiles, the grand and beautiful libraries around the world can be a destination worth making a pilgrimage for.

Some flock to the Trinity College Dublin Library, which is the largest single-chamber library in the world; while others head to the Bristol Central Library for its unique architecture.

The latest establishment to join the growing list of must-visit libraries is the Tianjin Binhai Library in China.

Named after the Chinese city it resides in, the library was designed by Rotterdam architectural firm MVRDV, in conjunction with the Tianjin Urban Planning and Design Institute (TUPDI).

Since its opening, the library has drawn attention for its futuristic design, which features a large spherical auditorium nicknamed “the Eye” as its focal point.

Surrounding this “eye” is a five-story, 34,200-square-meter glass structure that reflects natural light by day and sparkles at night.

Explaining this design element, MVRDV’s director Winy Maas said: “The Eye is the center of the library. It ‘hollows out’ the building and creates, out of bookshelves, an environment to sit, to read, [and] to hang out.”

Apart from its spectacular interior, the library also houses up to 1.2 million books. Visitors can cozy up and read at the many spaces within the library, including terraced bookshelves that contour the entirety of the curved interior and act as both stairs and seating.

The library is part of a larger “cultural complex master plan,” being carried out by GMP Architekten, and joins four other buildings through a series of “cultural corridors.” 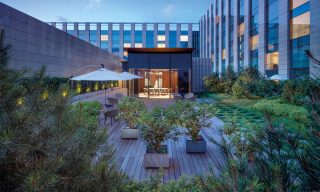 A Look at the “Urban Forest”–inspired Hyatt Regency Beijing Wangjing