Once a place of exile, Sado now lures visitors with its mountain-framed scenery, throwback charm, and myriad cultural experiences. 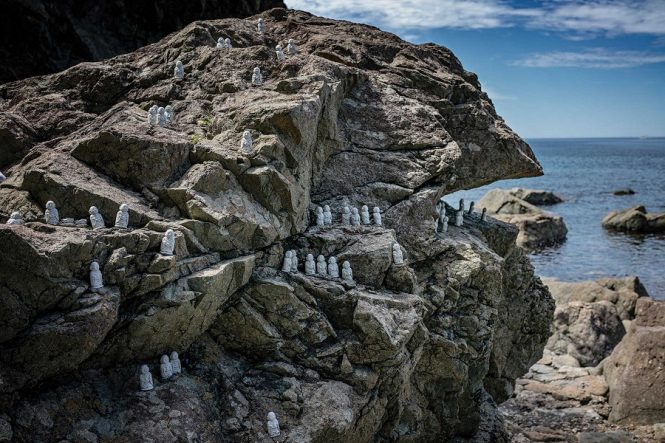 Small stone statues of the bodhisattva Jizo decorate the rocks outside the cave of Sai-no-Kawara, on Sado’s northern tip.

It has been said that you can find all of Japan on Sado Island. There is the refined culture of Kyoto in the form of Noh theater and second-to-none mumyoi-yaki ceramics. There are onsen hot springs and snowy winters similar to what you might find in Tohoku and Hokkaido. And the clear emerald seas here rival those of subtropical Okinawa.

Yet Sado is also unlike any other Japanese island I have visited. About the size of Singapore but home to just 50,000 people, it lies off Honshu’s northwest coast in the warm waters of the Tsushima Current, which nourishes an abundance of sea life. Girded by rocky coves and crags, Sado, whose butterfly shape is formed by two parallel mountain ranges connected by a low central plain of rice fields, was once considered remote enough to serve as a place of exile for banished intellectuals, disgraced nobles, and even a defeated emperor. Today, it’s just an hour’s jetfoil ride from mainland Niigata.

I first learned about Sado from an exhibition of early-20th-century photographs. And though I knew it would no longer be an island of thatched farmhouses, I was pleased to find that its mostly rural communities had resisted the bathroom tile–sided architectural conformity of postmodern Japan. Tradition is the rule here, not the exception. 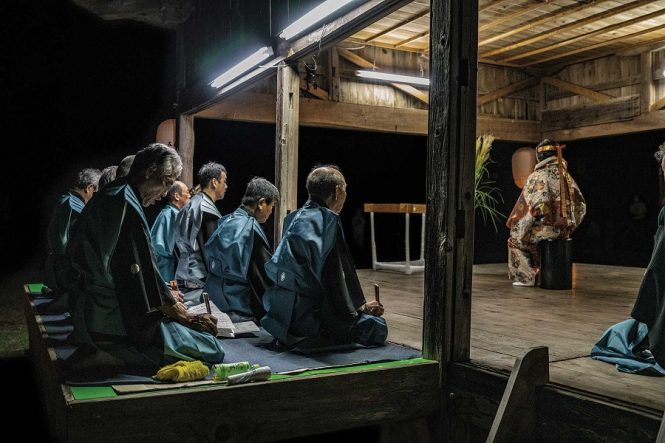 A nighttime Noh performance at the 12th-century Nikuu Shrine.

Much of the coast is fortress-like, with rugged cliffs guarding the fertile interior. Winding roads along the 280 kilometers of shoreline connect one sleepy fishing village to the next. (Due to the vagaries of the public bus system, visitors will need a car or motorcycle to get around, either of which can be rented in Ryotsu, the main town and ferry port.) The beaches I stopped at were uncrowded and uncluttered, visited by just a few picnicking families. Occasionally, a tarai-bune “tub” boat — they look like wooden washtubs — bobbed past, its occupant eyeing the rocky shallows for shellfish.

Sandwiched between the mountains, Kuninaka Plain is a sight to behold in its own right; but this luminous patchwork of rice fields is also where the Japanese crested ibis, or toki, has been saved from local extinction by an ongoing breeding program. With plumage tinged a delicate orange-tinted pink, the birds are now regularly spotted on the plain.

On the island’s southern shores, I strolled around the canal-lined fishing village of Shukunegi, where the shingled roofs of weathered timber houses are held down by stones. I also detoured to the Iwakubi Shoryu rice terraces, which climb 350 meters up the slopes of the Kosado range. The scenery is beautiful and the rice harvested here is considered among the best in the country. Little wonder, then, that the island also produces some fine sakes; Hokusetsu, a 150-year-old brewery in Tokuwa, is the sole sake supplier to Robert De Niro and Nobu Matsuhisa’s global chain of Nobu restaurants. 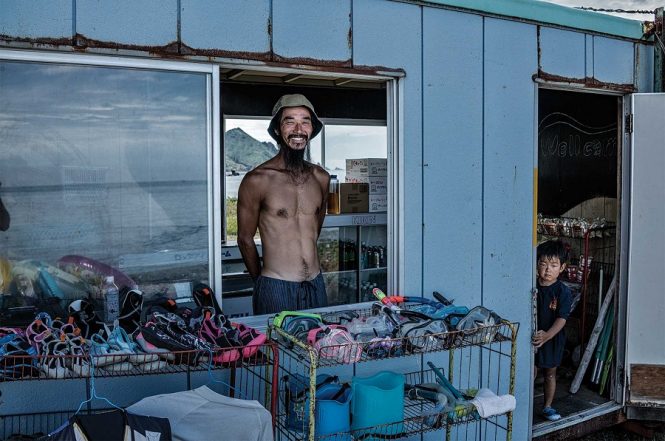 Snorkeling gear for rent at a shop on Futatsugame Beach.

Clear waters on the northernmost coast wash up against Futatsugame, a pair of rocky outcrops connected to the shore by a gravel isthmus. A short walk away at the base of a craggy bluff is Sai-no-Kawara, a sacred grotto that takes its name from the “Riverbed of the Netherworld” in Japanese Buddhist mythology — the place where the souls of departed children await passage to the afterlife. A multitude of tiny stone statues of Jizo, a guardian deity, stand watch on the rocks around the cave.

One of the island’s main cultural draws is Noh, which arrived here in 1434 with the exiled master playwright Zeami Motokiyo, who had fallen out with the reigning shogun. Zeami’s plays are still popular today. On the night I visited the torch-lit compound of the Nikuu Shrine, Noh actor Tomoki Tsuchiya was performing the principal role in Izutsu (“The Well Head”) on a traditional open-air stage sheltered by a thickly thatched roof. To his left, a somber chorus of eight men clad in blue hakama sat with their legs folded beneath them, closed fans in their right hands, chanting in a monotone punctuated by wild wails, the trill of a fue (bamboo flute), and the sharp report of a kotsuzumi (shoulder drum).

Stock-still, Tsuchiya gave a princely performance, chanting in an ancient, aristocratic form of Japanese that few understand today. But the music filling the still night evoked ancestral memories for the small audience, reminding them, perhaps, of their deep community roots and abiding connection to nature. 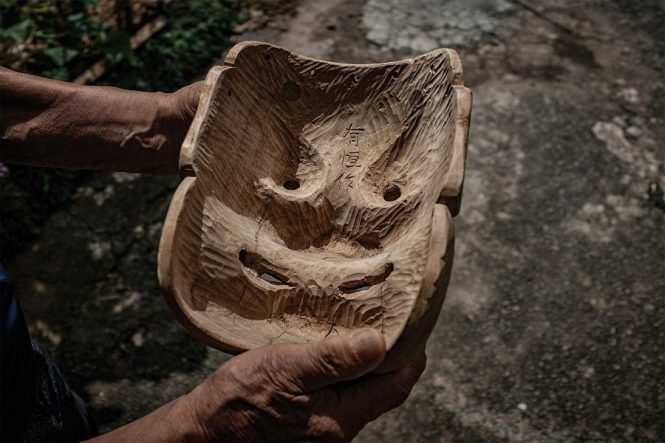 Oni mask maker Aritsune Watanabe showing off one of his creations.

Another art form with deep roots in Sado is the carving of wooden oni masks. These depict fearful demons (often with fangs and horns) and are integral to Shinto rituals and festivities. A master of the craft is Aritsune Watanabe, whose farmhouse, set amid vegetable plots beside a bamboo forest, is inhabited by hundreds of his own creations. The 90-year-old told me that making these sacred masks is “easy,” though the dozens of mallets, chisels, and other tools in his workshop testify to a skill born of decades of practice. He will sit cross-legged on the floor for hours, cradling a block of kiri (paulownia) wood in his muscular hands — and sometimes with his bare feet — as the features of the face he is carving slowly emerge.

His utter tranquility speaks to how the people of Sado live in harmony with the rhythms of nature, their verdant exile protected by the Sea of Japan from the frenetic postmodern world of the mainland. Soon, the island’s timeless traditions will be carried on the shoulders of the younger generation, so that they can, in due time, pass them on to their own children.

How to Plan a Sado Sojourn

From Tokyo, take the Joetsu Shinkansen bullet train to Niigata — a two-hour trip — and then a jetfoil or car ferry to Sado Island’s Ryotsu Port.

Sado Green Kiraku Hotel
This 31-room Japanese-style inn sits above Lake Kamo, not far from the ferry landing at Ryotsu Port. Dinners of king crab and wagyu beef are included in the half-board rate (doubles from US$60). 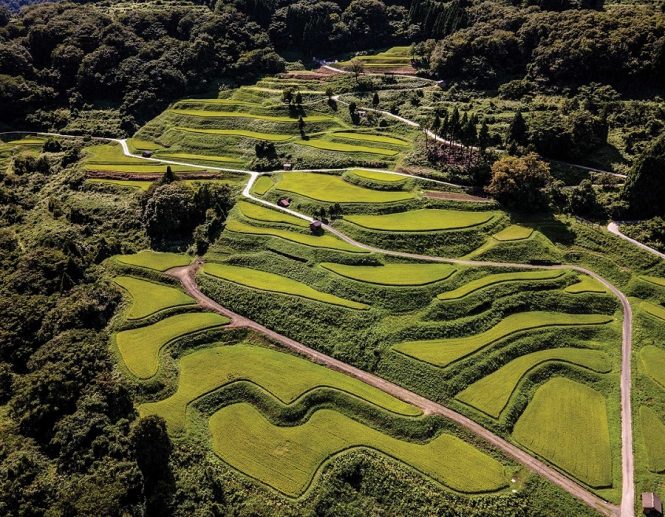 Sado Udon Aoi
The specialty at this converted farmhouse in the Chigusa area is seaweed udon noodles served with side dishes of sashimi, tempura, and stuffed crab.

This article originally appeared in the December 2022/February 2023 print issue of DestinAsian magazine (“Notes from a Small Island”). 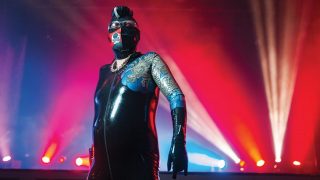