Sharing a border with Laos and Myanmar, the lush, mountainous region of Xishuangbanna is a slice of Southeast Asia in China, complete with hill tribes, tropical gardens, and steamy rain forests. Let the adventure begin.

Traveling alone has a way of landing you in some very unusual situations. One of my more recent encounters with this was when I found myself standing on a mountaintop in southern Yunnan with a young man talking to a rock.

The young man was Tommy, or at least that’s the English name Qian Zhen Min has given himself, and as for the rock, he hid it on the roof of a small pagoda there when he was 11 and vowed to come back and tell it every time a personal milestone—college, marriage, kids—had been achieved. It had been eight years since his last visit, and I’m not sure where I fell on his spectrum of importance, being just a guest for four days at the resort where he works as a recreation guide, but after letting out a loud “Ha!” he handed me the rock and told me it was my turn to tell it something too. A secret? A wish? Anything, it could be anything. I looked down through the branches of 800-year-old trees to the Luosuo River and a small cluster of blue-tiled roofs on its far bank, but the moment was meditative in such a way that I couldn’t pull out of it, and I found I had nothing to say. Perhaps that was the point.

When I’d stepped off my plane and onto the moonlit tarmac at the Xishuangbanna Gasa Airport three days before, having just arrived in China for the first time, it smelled like smoke, a musky scent of something damp and natural heated slowly to a glow. I knew that smell. Growing up in Atlanta, I would sometimes dine out with my family at a restaurant called Little Szechuan on Buford Highway, a corridor that cuts through the city’s various ethnic communities. Over the course of several visits, we came to know the owner, a man named Kong Ko. One dinner, he told us the story of how he fled Maoist China in the 1950s, swimming to Hong Kong with nothing but the clothes on his back. Xishuangbanna smelled like Little Szechuan.

But Kong’s China, I was quick to learn, was not Tommy’s China, nor was it ever. Prior to my arrival, the managers of the resort I was headed to—the Anantara Xishuangbanna—were the only people I could find who had been to the region, and they repeatedly told me how it was nothing like China at all. The southernmost prefecture of Yunnan province, Xishuangbanna was once called Mengbalanaxi, “an ideal and wonderful paradise,” part of the northern Thai kingdom of Lanna that extended as well through parts of present-day Laos and Myanmar. With its tropical climate, herds of wild elephants, and a population dominated by ethnic minorities who are being preserved through exemption from the one-child policy—the Dai, the Yao, the Bai, and the Jinuo, to name a few—Xishuangbanna has more in common with Southeast Asia than it does with anywhere else in the PRC. It wasn’t even until 1953 that the central government began assimilating the region into the rest of the country, establishing it as the Xishuangbanna Dai Autonomous Prefecture. Kong, whose home was a six-hour drive to the north in Sichuan province, was already planning his escape from China before Xishuangbanna was even noticeably part of it.

An ideal and wonderful paradise. The biggest city is Jinghong, where the airport is, which by Chinese standards hardly counts as a big city at all, with just 450,000 people, some chain restaurants, and a Walmart that never opened. Its palm-lined streets quickly give way to wild green hills. Some have been sewn with a patchwork of rubber and tea trees planted neatly into rows, but many are cloaked in an unbroken shroud of emerald virgin forests.

The Anantara sits next to Menglun, Tommy’s hometown atop the high banks of the Luosuo, a tributary of the Mekong. Sure, the resort is set apart from its modest surrounds, but it doesn’t feel at odds. That smoky smell always seems to gather beneath the lofty pitched ceiling of the open-air lobby, and the 80 enormous rooms and 23 pool villas are filled with richly patterned wood, creams, and soft yellow light—atmospheric and mellow like the damp, dim mornings and soft copper evenings. There’s an extravagant calmness to the days here, which roll along slowly under the blanket of thick heat.

More luxury resorts are on their way, but it’s hard to imagine the Anantara ever being upstaged. The accomodations are enormous; the spa, a heavenly enclave of light-flooded villas as treatment rooms; one of the five restaurants is ceilinged entirely in teal mosaics. And informed by the region’s traditional architecture, which is largely synonymous with Thailand’s, the resort looks like a scene from an old picture book—a pocket of pagoda rooftops backdropped by mountains and seemingly more gardens than buildings with lantern-lined pathways winding through the flowers. I often passed my interludes between outings on a recliner by the riverside infinity pool, my book a mere prop as I instead stared blank-mindedly across the slow flowing river to the lush greenery on the other side.

The other side is in fact the Xishuangbanna Tropical Botanical Garden. Created in 1959, it’s the largest botanical garden in Asia, covering a 1,125-hectare island wrapped in a bend of the river. It’s also a remarkable showcase of the prefecture’s biodiversity; though covering less than one percent of China’s total land area, Xishuangbanna is home to 16 percent of the country’s plant species and more than a fifth of its animals. A rain forest covers more than half of the island, with the rest dedicated to an array of sub-gardens—orchids, succulents, aromatics, edibles, and the like—as well as the Chinese Academy of Sciences, where research is conducted on everything from endangered plant species conserved in germplasm banks to plant-based medicine. 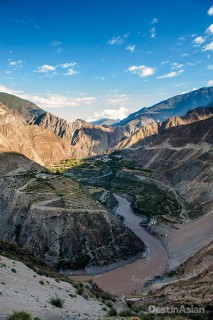 The Budding Wine Region of Yunnan

A world away from Bordeaux, old-word grapes are finding new purchase in China’s Diqing prefecture.