We’ve compiled a list of the world’s oldest and grandest museums, many of which have items that date as far back as prehistoric times.

Designed in the Greek Revival Style, the attraction first came into being when physician and collector Sir Hans Sloane bequeathed his entire collection to King George II. In exchange for Sloan’s 71,000 objects, his heirs were paid US$25,000, and the museum was born. Exterior of the British Museum.

After years of expansion, the 75,000-square-meter museum’s collection has grown, which includes Egyptian, Classical, and Mesopotamian antiquities, the last of which is the largest outside Iraq. Visitors can also look forward to seeing Western prints and drawings, Asian paintings and calligraphy, and materials from Africa and Oceania. The Parthenon sculptures. Photo from the museum. Guests inside the Egyptian sculpture gallery. Photo from the museum.

A visit to Paris would not be complete without visiting the world’s largest museum. Expect a throng of tourists surrounding its trademark glass pyramid, the brainchild of American-Chinese architect I.M. Pei and immortalized in many Hollywood movies. The original Louvre was a fortress built by Philippe Auguste in 1190. Located on Rue de Rivoli, it was later converted into a residential palace for France’s monarchs, but was later abandoned and became a sanctuary for the country’s vast collection of relics and artworks. The Louvre has borne witness to the republic’s colorful history, and its collection has steadily increased, although some were stolen during the Nazi Occupation. At present, the museum now has more than 380,000 objects and 35,000 works of art, including the heavily gilded Napoleon III Apartments (1852-57), Charles Le Brun’s Alexander in Babylon, Rembrandt’s Bathsheba at Her Bath, Jean-Auguste-Dominique Ingres’ Turkish Bath, Johannes Vermeer’s The Lacemaker, and of course, Leonardo da Vinci’s Mona Lisa. Be prepared to jostle through the crowd of selfie stick–wielding tourists around da Vinci’s work, but other paintings deserve equal attention. Alexander in Babylon by Charles Le Brun. Photo from the museum. Bowl from Caesarea Palaestinae. Photo courtesy of the museum. 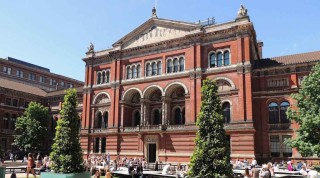