In the South Australian outback, Arkaba provides a heady combination of luxury, conservation, and adventure. A hiker en route to the foothills of the Elder Range.

I looked at the kangaroo, pleadingly. It looked back at me, smugly. All I wanted was one photo—just one picture!—of it bouncing across the ocher hills of the Flinders Ranges in South Australia, a classic outback shot that would no doubt ignite Instagram envy among my friends back home. But the marsupial had no intention of straying from the shelter of a gnarled gum tree. Kangaroos, it turns out, are not stupid. While mad dogs and this Englishman might go out in the midday sun, kangaroos don’t. They sensibly take refuge in whatever shade they can find, which is great for keeping themselves cool, but not so great for a photo op.

I was in the Flinders for a long weekend at Arkaba, a vast sheep ranch turned private nature conservancy whose 19th-century farmhouse (the Homestead) is now an upscale lodge with just five bedrooms, a pool, and gardens shared with emus and rose-breasted galah cockatoos. It’s a place where you can idle away a few days noshing on gourmet food, relaxing on the veranda with a book, or lying by the pool counting condensation lines on your gin and tonic. But for those seeking a more active getaway, there are safari-style drives that explore the farther reaches of the 260-square-kilometer property, and guided hikes into the hills with nights slept out under the stars. Think of it as a journey to the middle of the middle of nowhere but with steak, sauvignon blanc, and air conditioning. From the window seat of the chartered turboprop that flew me and three other guests in from Adelaide, the Flinders—a 400-kilometer-long range of rippling rock named after the English navigator Matthew Flinders, who circumnavigated Australia in 1802—appear barren and inhospitable. The landscape is predominantly brown, with the occasional line of trees flanking dried-up creek beds. Get closer, though, and even in this punishing environment, where nighttime temperatures in the summer remain in the 30s, you can see that life adapts, blossoms, and thrives. Sheep and cattle ranchers arrived on the scene in the mid 1800s, but for tens of thousands of years prior to European settlement, this region was inhabited by the indigenous Adnyamathanha people, as evinced by local rock shelters and cave paintings.

Amid this wilderness, Arkaba is literally an oasis. Dominated by an ancient line of red-rock bluffs aptly called the Elder Range, the property shares its northern border with Wilpena Pound, an enormous natural amphitheater of eroded hills. (According to Adnyamathanha tradition, the formation was created by two serpents that, after feasting on people who had gathered there for a ceremony, were so satiated they lay down and curled up in a bulbous heap.) The Homestead itself was constructed in 1856 and has been handsomely restored by Wild Bush Luxury, which bought Arkaba in 2009. While much of its original character has been preserved—flagstone flooring, corrugated-iron roofs, pressed-metal ceilings—the building now features comfortable furnishings and all the mod cons, with the exception of TVs and Wi-Fi. There’s a library, a lounge with comfy armchairs plus a help-yourself fridge stocked with wine, and the swimming pool, which has a partially shaded canopy. Dinners are served alfresco on a covered veranda with gorgeous views of the sun sinking over the hills. Indeed, the food here, prepared by Melburnian chef Matt Collins, is a major highlight, with dishes like pan-fried scallops and a toothsome tortellini of butternut squash and goat’s cheese appearing on the seasonal menu. Inside one of the property’s five individually designed guest rooms, each of which opens onto a covered veranda.

While it’s blissful to arrive, switch off, and digitally detox for a day or two, it would be rather missing the point not to get out and explore your surroundings, which you can do by vehicle or on foot. One afternoon we drove out to an old stone shearing shed where history oozed through the brick and wood and where, a century ago, workers carved their names around the doorframe. I could easily imagine the heat, sweat, swearing, smell, and noise at shearing time. A bank of vintage electric clippers dangled forlornly from a wall; the cobwebbed diesel traction engine that once powered them sat rusting close by.

Then came an overnight hike. Led by a guide named Darlene, we set out on a 30-kilometer trek that took in one of Arkaba’s two campsites. The walking itself was not too arduous, but the heat took its toll as our little group tramped up and down ridges flecked green, brown, and orange. We crunched along riverbeds on carpets of eucalyptus leaves and stopped frequently to inspect plants and trees, emus and kangaroos. Originally from New Zealand, Darlene also told us about the Europeans’ rather disastrous impact on the landscape, which is only now being corrected. White settlers severely overgrazed the parched land, introducing way more sheep per hectare than the environment could possibly support. They also brought with them invasive plants, goats, cats, foxes, and rabbits, all of which wreaked havoc on the fragile ecosystem. It’s thought that in the last 200 years, at least 22 mammal species have become locally extinct in the Flinders Ranges, including brush-tailed possums, quolls, and rabbit-eared bandicoots. Taking in the scenery of the Flinders Ranges.

Wild Bush Luxury has made restoring the original biodiversity of the area an integral part of Arkaba’s DNA; over 3,000 goats have been removed from the property, as have 350 feral cats, while rabbit warrens have been dug up with bulldozers. “Pest plant” programs have been developed to make way for native plants such as the narrow-leafed emu bush and Oswald’s wattle. From next April, a levy of two percent on all stays at Arkaba will go directly to ongoing conservation projects.

As we hiked along under the South Australian sun, I became something of a tree obsessive. River red gums, with their scabby, flaking bark, were my favorite. Highlighted against a cloudless sky, each seemed to have its own personality; I imagined them as grumpy old men grousing about the state of the world today. Flowers were rare, so the shocking-pink blooms of a bindweed stood out and demanded a sniff. I was also fascinated by the fierce-looking meat ants that swarmed into attack mode when we stepped too close to their underground colony. Less welcome were the flies that tried to suck the moisture from the corner of our eyes; they were the cause of constant arm flapping, not to mention increasing levels of swearing.

Having traversed Moralana Hill, Madge’s Gully, and the Red Ranges, we finally arrived, somewhat dusty, at our campsite. In keeping with Arkaba’s eco ethos, the setup here was “luxury rustic.” Bush showers—essentially buckets filled with water warmed over the campfire—were on hand for those wanting to wash up, while beds came in the form of swag rolls arranged on individual wooden platforms. After a simple but nourishing dinner of chicken-and-potato salad and chocolate-macadamia bars, we crawled into our swags and fell asleep under a sky filled with a billion twinkling stars. Fireside conversation at one of Arkaba’s wilderness camps, where guests sleep under the stars.

The next morning, we were all awake with our cameras for dawn: the first creeping rays of light tiptoeing over Mount Aleck blanketed the hills in a rich honeycomb hue. We ate a hearty breakfast before setting off for Arkaba. Tiny chestnut-crowned babblers flitted about; there were galahs and Australian ravens too, the latter’s call sounding rather like a child’s talking doll being strangled. We caught whiffs of curry bush and bitter saltbush, learning more about how plants such as these are supremely adapted to the harsh environment.

After a picnic lunch, we walked on for a few hours and then, dropping down from a hilltop studded with eucalyptus trees, we were back at the Homestead. I almost sprinted toward the wine fridge like it was a long-lost friend.

Resting by the pool later, I watched a group of kangaroos nibble grass in the front paddock. They kept their backs to my camera, taunting me. Next time, I decided, I’ll save my photo ops for koalas.

From Adelaide, it’s a 40-minute flight or four-hour drive to Arkaba. Nightly rates start from about US$710 per person, full board, for a minimum two-night stay. More active guests will want to consider the conservancy’s 45-kilometer Arkaba Walk, an immersive hiking experience that includes two nights at a swag camp and one at the Homestead, with guiding and transfers from/to Adelaide (one way flying, one way by road). Available from March through October, it costs from US$1,790 per person, twin share; see arkabawalk.com for details.

This article originally appeared in the October/November 2018 print issue of DestinAsian magazine (“Land Of Plenty”). 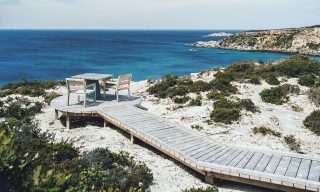 More than a third of its 4,400-odd square kilometers is protected parkland that shelters rabbit-size...

The six-day statewide restrictions are even tougher than those seen in neighboring Victoria.