Soaring above a dense urban landscape, the 634-meter Tokyo Skytree opened to the public on May 22. Poised to become the top Tokyo attraction, the Skytree is the world’s second-tallest structure, bested only by Dubai’s 828-meter Burj Khalifa.

While vertigo junkies are not able to ascend the tower’s crown, the 360-degree views of the Tokyo skyline and Mount Fuji from its two observation decks offer more than enough thrills. One deck, at 350 meters, houses a restaurant, café, and shop; the other, at 450 meters, features an outer glass walkway.

While thousands of thrill-seekers ascended the dizzying heights to mark the opening, the tower’s debut left some disappointed when strong winds forced the operators to temporarily shut down the elevators, stranding some visitors on the higher observation deck. Others complained about not being able to enjoy the panoramic views due to cloudy weather.

Opening-day disappointments aside, the structure looks set to elevate Tokyo as a tourism destination. 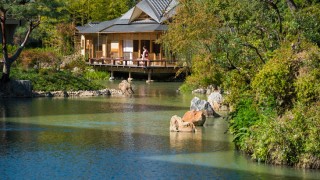 The hotel occupies a prime site on the edge of the beautiful Higashiyama mountain range, just a shor...