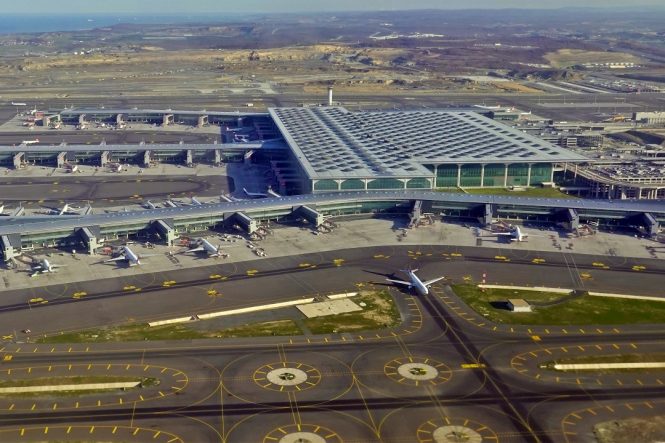 An aerial view of the terminal at Istanbul Airport. (Photo: Kulttuurinavigaattori)

Starting tomorrow, Hong Kong’s Department of Health will prohibit the landing of passenger flights from Istanbul operated by Turkish Airlines, with the temporary ban due to last until August 17. The suspension was announced after four Covid-19 cases were imported via flight TR083 on Sunday. Three of the four travelers who tested positive on arrival at Hong Kong International Airport had received one dose of Pfizer-BioNTech’s Comirnaty vaccine in the United Kingdom, while the other was unvaccinated. Genome sequencing revealed that three of the cases carried the L452R mutation, which is present in the highly contagious Delta variant, and the remaining patient had the N501Y mutation, known to be responsible for increased viral transmission in the Alpha, Beta, and Gamma variants.

Hong Kong’s tough coronavirus rules penalize airlines for bringing in too many Covid-positive passengers at any one time. Carriers that have recently fallen afoul of those regulations include Qatar Airways and Asiana Airlines; Singapore Airlines and its low-cost subsidiary Scoot stopped allowing transit passengers into Hong Kong in April after receiving their own temporary flight bans.

In a statement, a spokesman for the territory’s Center for Health Protection said, “The global situation of Covid-19 infection remains severe and there is a continuous increase in the number of cases involving mutant strains that carry higher transmissibility, and there are also reports of breakthrough infections in some vaccinated individuals.” The spokesperson also cautioned against non-essential travel outside Hong Kong, particularly to places classified as “very” or “extremely” high-risk.