Neighboring each other on the banks of the Chao Phraya, the Thai capital’s dazzling new Capella and Four Seasons hotels provide a double dose of waterfront sophistication. This is it,” I said to my wife with a mouth full of ricotta-parmesan pancakes. “This is my new favorite breakfast spot in Bangkok.” Here, on a dining terrace under a rain tree, with the Chao Phraya River sloshing against the embankment and the hushed thrum of the Thai capital almost out of earshot. However much I love the ceaseless buzz of this city, I’m always on the lookout for a place that feels like an escape from it. A bubble of calm amid the bustle. And with the recent arrival of the Capella Bangkok, I think I’ve found just that.

What a bubble it is. Capella’s first foray in Thailand is part of the ultra-luxurious Chao Phraya Estate, a mixed-use complex that I’ve watched grow from a nondescript construction site in 2015 into today’s marble-walled compound, with one of Bangkok’s tallest residential buildings towering over it. Positioned downstream from the hurly-burly of Saphan Taksin, where longtail boats roar all day and flashy malls and hotels barnacle the riverbank, it has, quite possibly, taken over one of the prettiest plots along the water.

And the Capella has used this to its full advantage. Not only does the U-shaped building seem to literally embrace the river, but the picture windows in every guest room, restaurant, and public area also ensured that we never lost sight of the Chao Phraya. The pared-back design, marble-heavy with subtle Thai touches, only enhanced that: it won’t sweep you off your feet so that these unobstructed river views can do the talking.

The 101 rooms echo this approach. Clad in blond woods and palettes of beige and cream, they feel calm and considered, with even the windows of their spa-like travertine bathrooms framing river views. Our Verandah room offered a better vantage point, though: a sweeping balcony fitted with our own Jacuzzi plunge pool and two different seating nooks. And these aren’t even the top digs. If we had wanted to, we could’ve gone all-out by booking one of the Capella’s villas. The first of their kind in the city, they’re perched right on the waterside and come with their own gardens, lounge salas, and swimming pools, plus an indoor-outdoor bathroom, separate living room, and a host of VIP perks such as fast-track airport transfers and jet-lag treatments upon arrival. 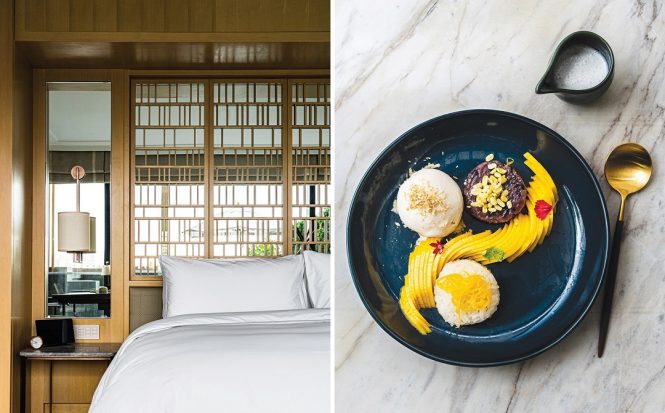 But even us regular folks were made to feel extraordinarily special. Like every guest, we were assigned a Capella Culturist, or personal concierge, who could fix everything from monk-guided meditation sessions to muay thai master classes and street-food crawls with a Thai chef. He surprised my son with pre-bedtime milk and cookies and ourselves with a Diamant Brut bottled exclusively for the hotel. A friend who checked in a weekend after our stay told me his Culturist had set up a private whisky tasting in his room after she got air of his fondness for the drink.

Two restaurants and a hidden bar completed the package. We had dinner at Côte, a coastal Mediterranean concept by Italian-Argentine chef Mauro Colagreco, whose celebrated restaurant on the French Riviera, Mirazur, bagged its third Michelin star in 2019. Here in Bangkok, his protégé Davide Garavaglia takes the reins and infuses Colagreco’s signature ingredient-driven approach with a touch of Thai flair: think foie gras jazzed up with pomelo and anchoïade with kaffir lime. That breakfast spot I gushed about earlier turns into Phra Nakhon by day, where no-holds-barred Thai food dominates the menu. And then there’s Stella, a boudoir-like homage to historic heroines of the East with drinks and a “dessert omakase” inspired by Chinese pirates and Indian warrior queens.

A few weekends later, I found myself at the other wing of the Chao Phraya Estate for a stay at the Four Seasons Hotel Bangkok, which opened its doors in December. Where Capella is intimate and pared-back, its next-door neighbor goes all out, both in size (there are three times as many rooms) and design. Think of the estate as a high-society family, and Capella would be the matriarch — graceful and discreet, only revealing her frisky side to those she knows well. The Four Seasons, on the other hand, would be the slightly rebellious sister. Uber-stylish and outspoken, unafraid to shirk family traditions. That was clear from the moment I stepped inside: architect Jean-Michel Gathy studded the double-height lobby with eye-popping artworks commissioned from local artists. There are wall-length elephant gravures, Pollock-esque splash paintings, and minimalist depictions of the Chao Phraya, plus a separate art gallery that showcases up-and-coming Thai talent. The building itself is equally artful: a set of boxes cascading toward the waterside, strung together by palm-fringed courtyards and terraced waterscapes resembling the flooded rice paddies of rural Thailand. One of those courtyards is home to a spa that rivals some of the country’s best wellness resorts; another hosts a tea terrace where we had afternoon tea with foie gras tacos and pralines of Chiang Mai chocolate. 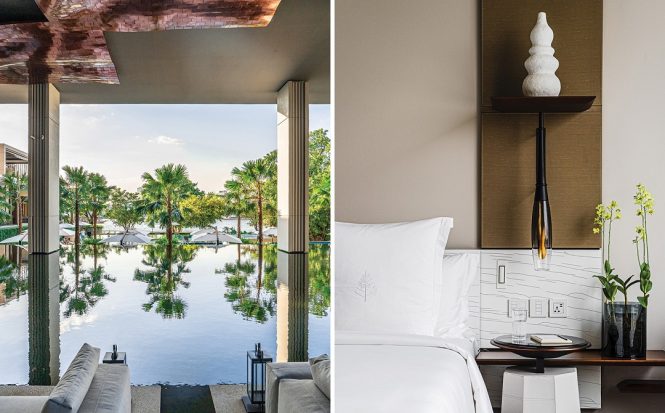 The feasting continued at Yu Ting Yuan, for which chef Qui Xiaogui has brought over his team from Guangzhou to dish up real-deal Cantonese dim sum, barbecue, and stir-fries against a Gathy-designed backdrop of Chinese art and dramatic floral arrangements. Closer to the river, there’s Brasserie Palmier, a tropic-tinged French bistro where the menu riffs on light, seafood-focused French classics (fresh oysters, moules marinière, sole grenobloise, et plus) served with thumb-thick sweet potato fries that had me ordering seconds. Cross the two-tiered (and rather excellent) swimming pool from here, and you’ll reach Riva del Fiume. At this bright and easy-going Italian restaurant, our long riverside lunch consisted of citrusy crudo, slushy tableside sgroppinos, and truffle-flecked pastas dished out from an open kitchen.

After one too many potent — and dangerously affordable — negronis, I was grateful that my bed was only a short elevator ride up. Contrasting the public areas, the rooms here feel more sober: taupes and grays dominate, while faux-ostrich leather and Thai silks lend a tactile touch. Some come with river views, while others, like ours, look out over the central courtyard or the endless cityscape.

With two hospitality powerhouses pitched next to each other, the inevitable question arises: which one to book? Frankly, it hardly matters. Both deliver big on service and comfort, both enjoy the same fabulous riverside setting. And thanks to the neighborly setup, the Chao Phraya Estate feels like one big megaresort. Bar-hop between Stella and BKK Social Club, have breakfast at Brasserie Palmier before you retreat to your Jacuzzi at Capella — it’s a pick ’n’ mix with no dull candies. 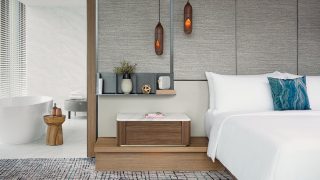 International travelers can look forward to a hassle-free stay at this gorgeous SHA+ hotel downtown. 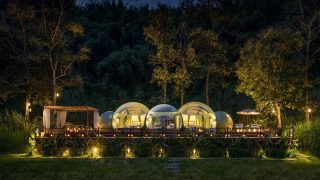