The verdant surrounds of Bali’s cultural and spiritual heartland are more alluring than ever, thanks to new levels of comfort and sophistication.

Sunset at Pomegranate is as Zen as it gets, a time and place to cleanse one’s mind of all thoughts. Reached via a ridge-top walking trail from Ubud’s main road, the tent-roofed café opens west over the ripening rice fields that frame the Campuhan River and is a popular evening haunt for travelers looking to combine the tropical scenery with a tipple and the onset of twilight. The setting is idyllic in the strictest sense—a bewitching tableau of pastoral perfection.

It’s hard for visitors—whether they’re here for the first or 15th time—not to be mesmerized by Ubud’s verdant beauty. Pasted around the ravines and jungles of Bali’s central foothills, the town and its surrounding district has welcomed all sorts since tourism began here almost a century ago. Back then came the artists and intellectuals, followed in no particular order by explorers and adventurers, hippies, backpackers, yogis and yoginis, the Eat, Pray, Love set, and day-tripping package tourists. Well-heeled sybarites are also catered for, thanks to a profusion of discreetly luxurious resorts and a burgeoning food scene. I found plenty of both on a recent trip, along with beguiling glimpses of village life and a surfeit of cultural riches.

“People come here because there is still strong local culture. Kuta, Seminyak, Legian, Jimbaran, they all feel very international. I was born in Ubud, and I will die in Ubud. It still feels like Bali.” That was the response of Nyoman, the taxi driver taking me from Denpasar airport to Ubud, when I had asked him about the evergreen appeal of his hometown.

This sense of authenticity, for want of a better epithet, was a sentiment echoed by many people I met during my week there in late October, when I was in town to attend the annual Ubud Writers & Readers Festival (UWRF). The literary smorgasbord marked its 12th year in 2015 and attracted internationally renowned authors such as Michael Chabon and Mohsin Hamid. It’s the type of event that aptly represents Ubud’s happy mingling of hedonism and culture, something that has been brewing since the 1920s when the princedom’s rulers invited foreign artists to come to their little slice of island paradise. Soon the German primitivist Walter Spies, Dutch painter Rudolf Bonnet, Canadian composer Colin McPhee, and other artists became fixtures in Ubud, creating their own work while promoting Balinese culture overseas. Tourism of any meaningful metric started in the 1960s, and the rest, as the saying goes, is history. “If you come to Bali,” another taxi driver called Nyoman told me on my third day, “you have to come to Ubud. Otherwise you haven’t really been to Bali.”

Many people do come, and the town today is almost unrecognizable from the one I first visited in 1998, goosed by a growth that parallels Bali’s ever-rising fortunes as a tourist destination. This has not been without cost. Central Ubud is now crammed with lodgings, places to eat, and shops where you can pick up incongruous tchotchkes like painted metal Santa Clauses. On its congested main street and along similarly bustling Monkey Forest Road, shop signs confirm the ubiquity of global brands such as Quicksilver, Rip Curl, Nike, and Starbucks. The intersection by the Royal Palace is mired in traffic throughout the day, every day, the pavement packed with people waiting for taxis or hotel shuttles. And while all of this might sound good for business, not all residents are thrilled by the pace of development.

“So many people have moved here in recent years,” Canadian expat Mykah Sterling told me over coffee one afternoon at Kismet, the clothing boutique and café he co-founded two years ago. “Now, it’s not nearly as affordable. Our rent has gone up 10 percent each year. And see there—a three-story restaurant and boutique is being built diagonally across from us. Some people have started calling Ubud Little Seminyak.”

Yet Ubud continues to charm visitors in the way that small towns can. Despite the rising rents, crush of scooters, vegan restaurants, tilak-adorned European twentysomethings in batik-print MC Hammer pants, and budget guesthouses, nothing seems to have diluted the everyday aspect of a community where residents offer prayers and small packets of flowers to the gods each morning, as if the whole tourism engine is nothing more than an incidental sideshow. In another sense, Ubud as a tourist destination has always had a split personality. There’s the bustling downtown itself, busy with backpackers and sightseers and souvenir hunters; and then there are the plush resorts, mostly on the fringes—refuges that charge a king’s ransom for a room with views of rice paddies or gurgling streams. And it’s that segment that is really taking off. 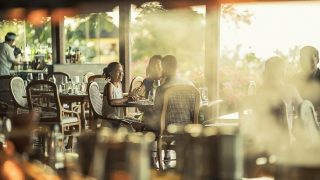 Celebrate the festive season and ring in 2021 at these luxe resorts on Indonesia’s Island of the G...