Luxury travel company andBeyond and wildlife broadcasting experts WildEarth have partnered up to stream twice-daily, personalized game drives that erstwhile travelers can view from the comfort of their home. Traveling might not be encouraged these days, but you can satisfy your love for the great outdoors with these live streams of safaris. In a bid to bring the beauty of the natural world to travelers, luxury travel company andBeyond and wildlife broadcasting experts WildEarth have partnered up to stream twice-daily, personalized game drives that erstwhile travelers can view from the comfort of their home.

Viewers will be able to join up to two live safaris a day, each of which will last approximately three hours. These will be streamed in real-time from two South African game reserves, namely andBeyond Ngala Private Game Reserve—which shares unfenced borders with the famed Kruger National Park, and Djuma Private Game Reserve, a part of the Sabi Sand Game Reserve.

Hosted by field guides, the drives will be streamed over a variety of social media platforms each day during the month of April. Viewers can expect non-scripted game drives that follow the sights and sounds of the African wilderness as they unfold.

According to the broadcasters, the camera will move between three or four live feeds to bring viewers wildlife action as it unfolds, creating a seamless multi-feed virtual game drive. Curious viewers can also interact with their safari hosts and have their questions answered in real-time, just as if they were actually on the game drive vehicle. 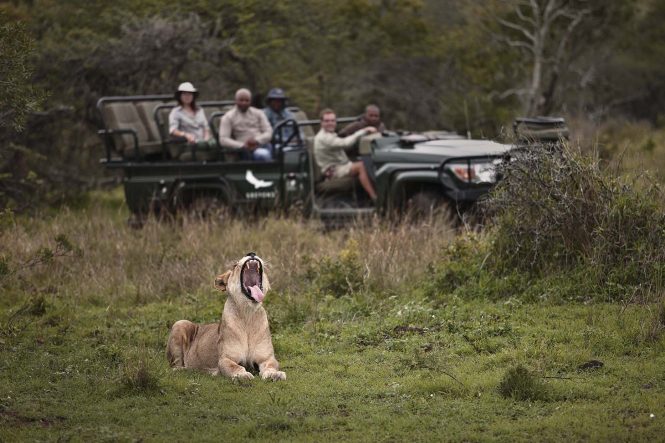 In addition, the first 45 minutes of each afternoon drive will be dedicated to young wildlife fans and the guides will only answer questions asked by children during this time. Parents can sign up their children by selecting a date on wildearth.tv/kids. Children or parents can then email kidsquestions@wildearth.tv for age-appropriate and personalized responses.

Viewers can lookout for some of Africa’s most enigmatic wildlife, such as Thandi, the female leopard and her cast of feline relatives, or the Birmingham lion pride, whose story straddles both reserves. The females are currently one of the resident prides at andBeyond Ngala Private Game Reserve, where they are raising two white lion cubs, while the pride’s male coalition moved south to Djuma Private Game Reserve some years ago.