As surreal landscapes go, Bolivia’s Salar de Uyuni may as well belong on another planet. 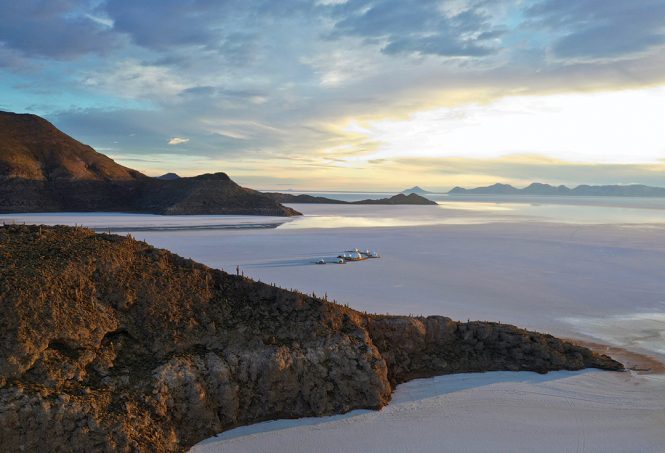 Lying 3,600 meters above sea level, Kachi Lodge is the only permanent accommodation on the Salar de Uyuni.

As surreal landscapes go, Bolivia’s Salar de Uyuni may as well belong on another planet. It’s the largest and highest salt flat in the world, a 10,582-square-kilometer basin in the Andean Altiplano broken only by cacti-studded islands of fossilized coral. The area’s elemental beauty is accentuated during the rainy months of January to March, when shallow floodwaters mirror the sky’s changing colors to dazzling effect.

Another reason to go? Kachi Lodge (all-inclusive two-night stays from US$2,280 per person), which debuted last May. Conceived by luxury camping outfit Amazing Escapes, it’s a futuristic vision of geodesic domes raised on a wooden platform. Guests sleep in six tents adorned with pieces by Bolivian artist Gastón Ugalde, while meals are catered by Gustu, the restaurant that put La Paz on the culinary map. For jet-setting gourmands, the Salar de Uyuni is now a destination worth its salt.

From the Bolivian capital of La Paz, flag carrier Boliviana de Aviación flies daily to Uyuni, a 50-minute trip. Airport transfers to Kachi Lodge take up to five hours depending on water levels in the Salar.

Sunglasses and sunscreen should be worn at daytime to protect against the higher levels of ultraviolet radiation at altitude, while a tripod is a must for photographing the Salar de Uyuni’s famously starry nights.