A drive through New South Wales’ Northern Rivers region reveals there’s plenty more to this northeastern corner of the state than Byron Bay, not the least of which is a thriving food scene. “This one tastes like chocolate pudding,” says the chipper, check-shirted server as she arranges a wooden platter on our picnic table. “And that one, like caramel. Oh, and if you like custard …” Her voice trails off as she notices my expression, which I suppose is one of bafflement, because this is no dessert board she’s describing. Rather, it’s a kaleidoscope of glistening tropical fruits, only a few of which I recognize. Shrugging, she points to a ruby-red berry and adds, “Eat this, and everything else will taste sweet. Even”—and here she flourishes a wedge of citrus—“lemons.” 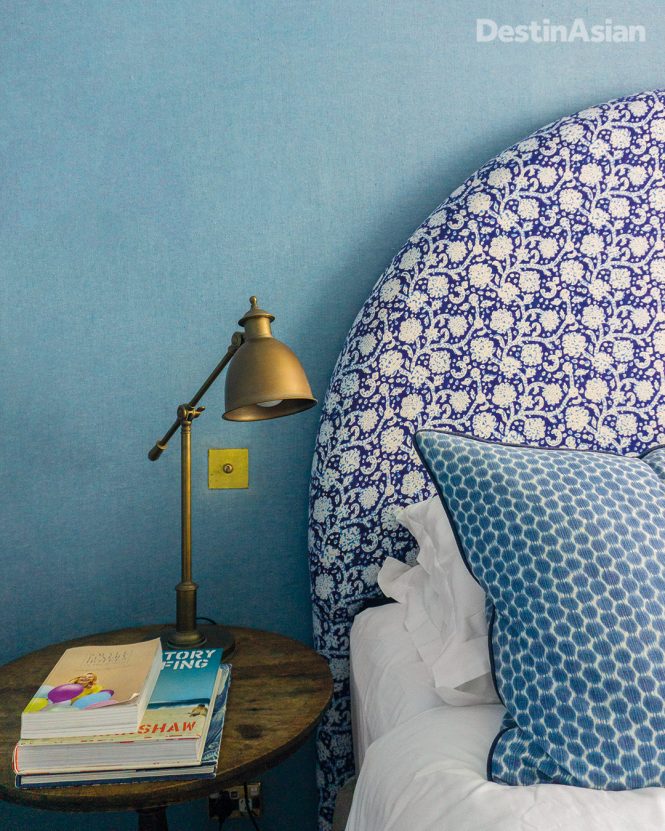 Truth be told, my expectations for Tropical Fruit World were not high. With its petting zoo and boat rides and tractor trains, the 65-hectare fruit farm sounded like the sort of tourist attraction I usually avoid. But as an introduction to the astonishing fecundity of northern New South Wales’ Tweed Valley, it proves entirely worthwhile. More than 500 fruits from around the world are grown here, from avocados and macadamia nuts to the seasonal exotica on the platter before me: black sapote, a Latin American species of persimmon with pudding-like flesh; caramel-flavored sapodilla; cherimoya, a.k.a. custard apple, which Mark Twain once called the “most delicious fruit known to men”; champagne papaya; rollinia; canistel; tamarillo; and the so-called miracle berry, a tangy West African fruit that really does make lemons taste sweet by coating your taste buds with the protein miraculin. “This valley is a biodiversity hot spot,” explains Michael Simmons, my guide on a food-and-farm tour organized by his local travel company, Mount Warning Tours. “You can grow anything here. The soils are volcanic and very fertile, there’s plenty of rainfall, and you’ve got this convergence of temperate and subtropical climates that’s like nowhere else on the continent. We call it the Green Cauldron.”

Situated just south of the Queensland border, Tweed Valley and the eponymous shire it calls home are part of the Northern Rivers region of New South Wales, a 230-kilometer stretch of coast and hinterland best known for the hip surfing town of Byron Bay. The area lies closer to Brisbane than to Sydney, and indeed I’ve arrived via the border-straddling Gold Coast Airport, where I rented a car earlier that morning for the 20-minute drive to the Halcyon House hotel on Cabarita Beach. My plan is to spend two nights here and a final night in Byron Bay, taking in both the bucolic landscapes and a thriving restaurant scene that’s underpinned by exceptional regional produce. 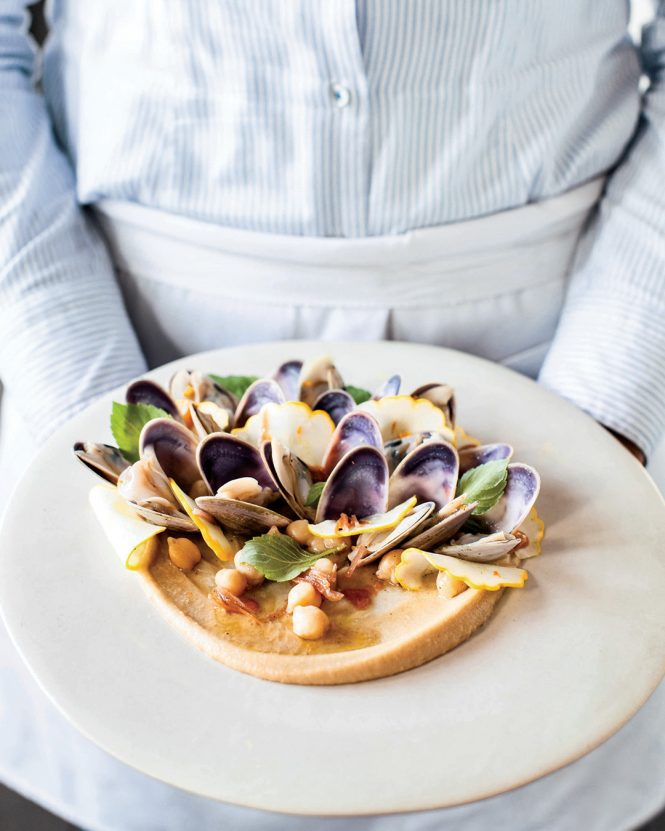 Some of that bounty is on show at the months-old café at Farm & Co, where Michael takes me next. Outside are sunflower fields, rows of organic vegetables, flocks of gallah cockatoos, and a pair of adorable calves named Chickpea and Sprout. Inside, the all-vegetarian menu is devoted to ingredients from the farm: black-bean burritos with charred pineapple; bao buns stuffed with pureed parsnip; Buddha bowls brimming with tempeh, pickled cucumbers, brown rice, and garden-fresh slaw.

Our third stop is Tweed Valley Whey, a 30-minute drive to the south outside the blink-and-you-miss-it country town of Burringbar. Run by fourth-generation dairy farmers Sue and Rob Harnett, the cheese factory and showroom turns out “pasture to platter” farmhouse cheeses ranging from brie and camembert to brine-soaked feta, halloumi, whey ricotta, and a soft young blue. We join some other visitors at the Tasmanian-oak bar counter for a tasting session. “As soon as we milk the cows, that milk is turned into cheese and yogurt,” our host says. Offering us samples of the latter, she adds, “If you ask me if this yogurt is fresh, I can tell you it was in the cow just yesterday!” The last leg of my outing with Michael takes us through the heart of the bowl-shaped valley, a caldera formed millions of years ago by the explosion of the largest shield volcano in the southern hemisphere. The central remnant of that ancient cataclysm is the spire of Mount Warning, an eroded lava plug named by Captain Cook in 1770 to alert navigators to the treacherous reefs he encountered off the Tweed Coast. But long before that, the valley’s traditional custodians, the Bundjalung people, gave the craggy peak a much less prosaic moniker: Wollumbin, or “Cloud Catcher.” Rising to 1,156 meters, it’s also where the light of dawn first touches mainland Australia.

Before long we’re driving past swaths of sugarcane, which has been cultivated here since the 1870s. The landscape suddenly reminds me of the highlands of Mauritius. I mention this to Michael, and he nods. “I had a Mauritian girlfriend once, and she said the exact same thing.”

On the banks of the Tweed River in Tumbulgum, geologist turned distiller Paul Messenger uses sugarcane grown on his family’s farm to produce what he bills as Australia’s only agricultural rum, which is made with sugarcane juice rather than molasses. Founded in 2012, Messenger’s Husk Distillers opened its striking new facility to the public in June, and it’s well worth the detour. Tours take you through the cane-crushing and distilling processes before ending with a rum tasting flight in the barrel house. One sip of their four-year-old Spiced Bam Bam is all it takes to make me a convert. 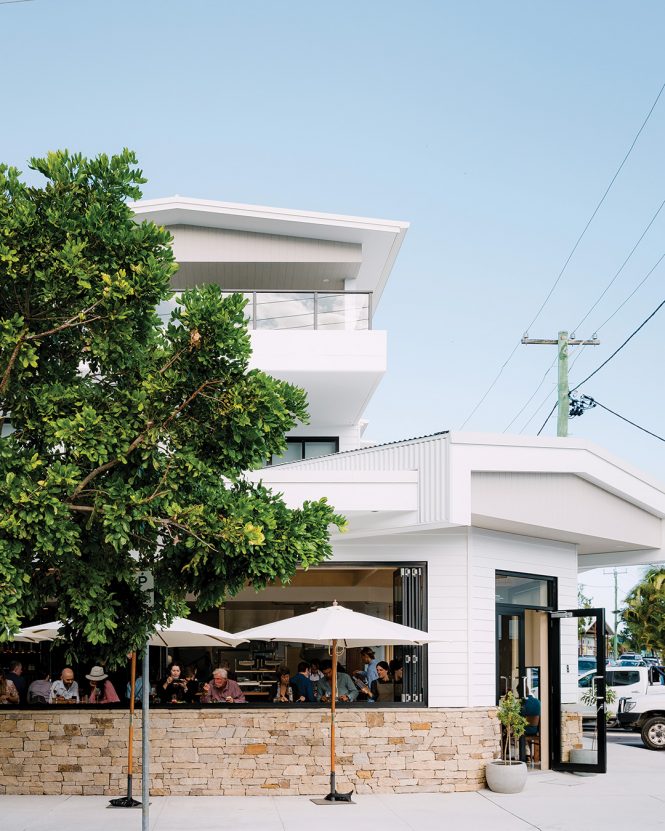 A 1960s surfers’ motel that was transformed a few years ago into a beautifully styled boutique hotel, Halcyon House gives guests plenty of reasons not to leave the property: eclectic, made-for-Instagram interiors distinguishes by fabric wall-coverings, handpicked artwork, and antique furnishings; a tranquil spa; direct access to the inviting white sands of Cabarita Beach; and Paper Daisy, a fabulous poolside restaurant where I dine on kangaroo tartare and slow-cooked pork collar with sour-plum coulis.

So it’s with some effort that I head back into the Tweed Valley after breakfast the next day to wander around Murwillumbah, a riverside town of low-slung art deco buildings made infamous in the 1970s as the site of Australia’s then-biggest bank heist. These days, Mur’bah (as locals call it) is staking its reputation on the arts; according to Michael, there are more creatives per capita living here than anywhere else in
the country, as well as one of the world’s longest graffiti walls and a burgeoning arts precinct. After visiting both, I drive five minutes to the Tweed Regional Gallery to check out its collection of local and national art, which is impressive. There’s also a faithful re-creation of the home studio of one of Australia’s most beloved still-life painters, the late Margaret Olley, who grew up in nearby Lismore. 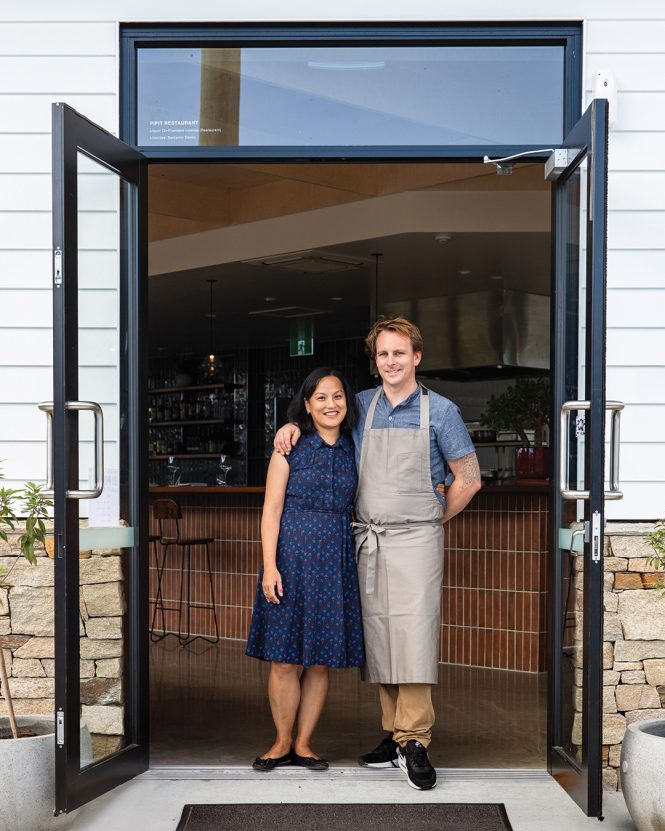 Ben Devlin and his partner Yen Trinh at the entrance to the same restaurant.

Hungry again, I roll up to Mavis’s Kitchen, an airy country-style restaurant overlooked by Mount Warning. Charlie Ebell, the affable owner, explains that the two-story Queenslander house it occupies—a century-old gem with a wraparound veranda and Victorian fretwork—was once his childhood home on the Gold Coast. When he and his partner Peter Clarke decided to move to the Tweed countryside in 2007, they brought the house with them, trucking it down in three sections and reassembling it here on their 11-hectare former dairy farm. The surrounding kitchen gardens and citrus orchard now provide a pastoral backdrop to homey dishes like seafood in a rustic tomato sugo, which arrives at my table still bubbling in a cast-iron skillet.

And then there’s Pipit, where I have dinner that night. Located in the otherwise unremarkable town of Pottsville, a short drive south of Cabarita, Pipit is the first solo venture by Byron-born chef Ben Devlin, a Noma alum who helmed Paper Daisy for its first four years. His dedication to contemporary coastal cooking continues here, with a menu focused on sustainable seafood and regional produce—smoked-mullet tart, brine-cured black kingfish, trevally with roasted kohlrabi and sunflower-seed puree—all cooked over charcoal. The wine list is coastal-leaning too, with eye-openers like an orange wine from Byron and a sweet Bass River iced riesling. When I later hear of Pipit’s being named the best new regional restaurant by the Australian Good Food Guide, I’m not surprised at all. 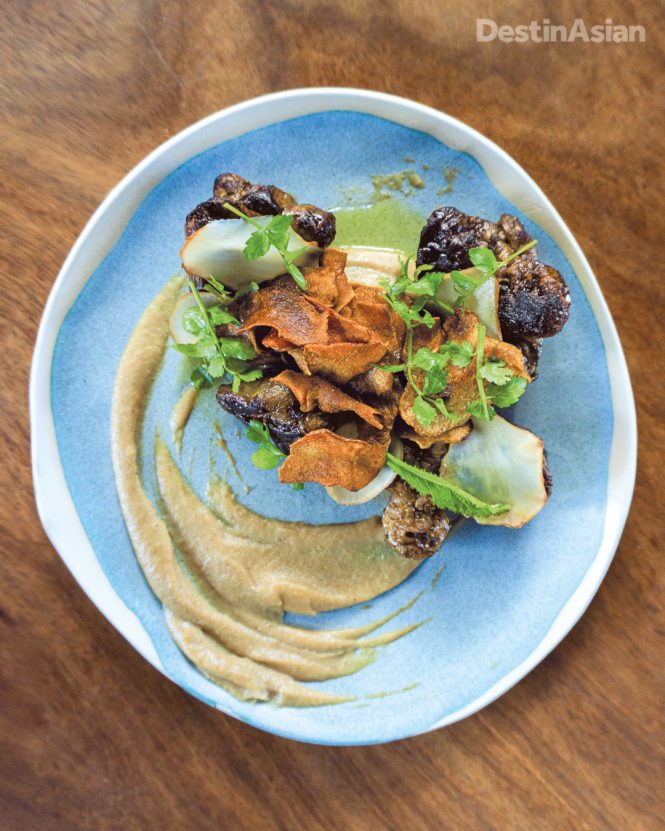 It takes all of 40 minutes to cruise down Tweed Coast Road to Brunswick Heads. It’s a Saturday afternoon, and when I arrive, an annual town-wide garage sale called the Old is Gold Festival is in full swing. With a couple hours to kill before my 3 p.m. lunch seating at Fleet, I poke around the assorted schlock up for grabs in churchyards and lawns, and take a seat in a beer tent outside the old municipal hall, where Hubcap Stan and the Sidewalk Stompers are thumping out old-timey tunes to a small but appreciative audience. 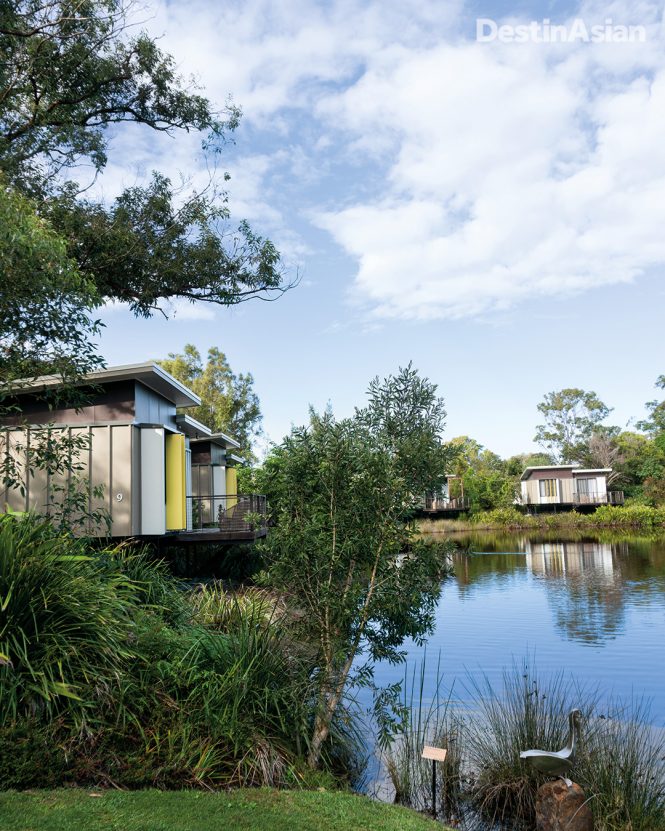 Lagoon-side cabins at Elements of Byron, a sprawling seaside retreat on Belongil Beach.

Like Pipit, Fleet is compact and sophisticated and wildly ambitious for its small-town setting—though being in the orbit of Byron Bay, both restaurants have a pool of sophisticated palates to draw on. Chef Josh Lewis and his partner Astrid McCormack opened the place in 2015 and reservations have been hard to get ever since, in part because each of its two daily seatings accommodate no more than 14 diners, but mainly because the food is dynamite. Sitting at the concrete countertop next to the tiny open kitchen, I watch Lewis as he singlehandedly prepares and plates all his dishes. Among the highlights: a pâté of mullet smoked over pine cones; an ambrosial veal sweetbread “schnitty sanga” (that’s Aussie for schnitzel sandwich); charcoal-warmed oysters with sheep’s-milk yogurt and macadamia shavings; a congee of mud crab and millet topped by an egg yolk, which you stir together yourself. It’s clever, it’s fun, it’s delicious. And I hardly notice that three hours have passed by the time I’ve worked my way through all eight courses. 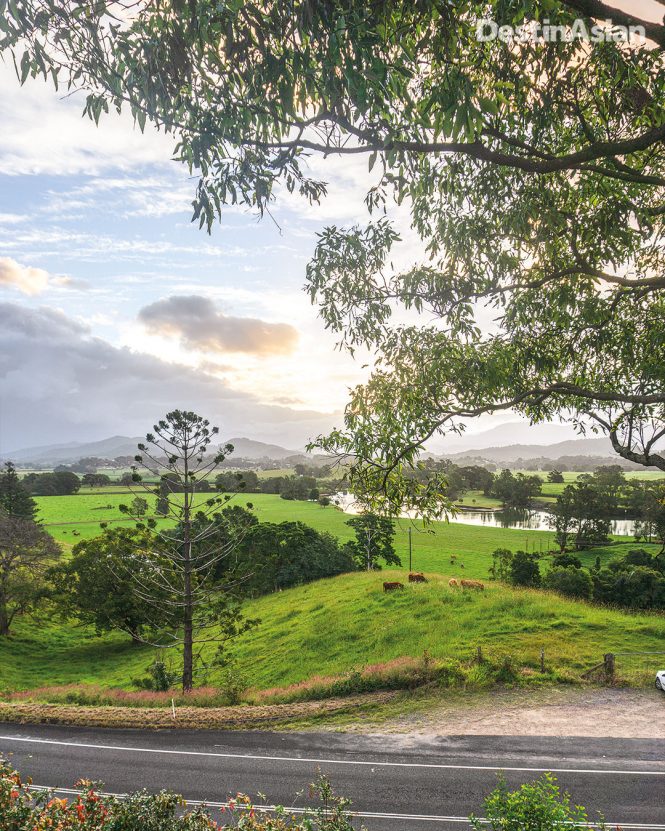 A view of the Tweed River and the distant escarpment of the Border Ranges from the Tweed Regional Gallery & Margaret Olley Art Centre in Murwillumbah.

So much for dinner in Byron Bay: I succumb to a food coma right after checking in to my boxy but cozily appointed villa at Elements of Byron on Belongil Beach. Arising late the next morning, I take a saunter around the 22-hectare property, which is fronted by sand dunes and enveloped by native bush. (At one point, I narrowly avoid stepping on a young python muscling its way out from the undergrowth.) Then it’s back in the car for a look at the lighthouse on Cape Byron, the easternmost point of mainland Australia.

There’s time for one more meal before I drop the car at the airport at Ballina, from where I’ll fly back to Sydney. So on the recommendation of the Elements’ concierge, I steer inland toward Newrybar, a historic village of clapboard cottages in the rolling Byron hinterlands. Some of those cottages are now occupied by boutique shops; the one I want is a restaurant, Harvest Newrybar, which also comprises a bakery with a century-old wood-fired oven that turns out plump loaves of sourdough bread. I take a seat on the veranda and order a bowl of steamed Coffee Bay mussels and Jerusalem artichoke prepared four ways. It’s like the Northern Rivers on a plate: pretty, fresh, sophisticatedly simple, and leaving me wanting more.