The lure of the Yucatán’s Caribbean coast is nothing compared to what lies inland, as a mother of two discovers on a family road trip through the Maya heartland. 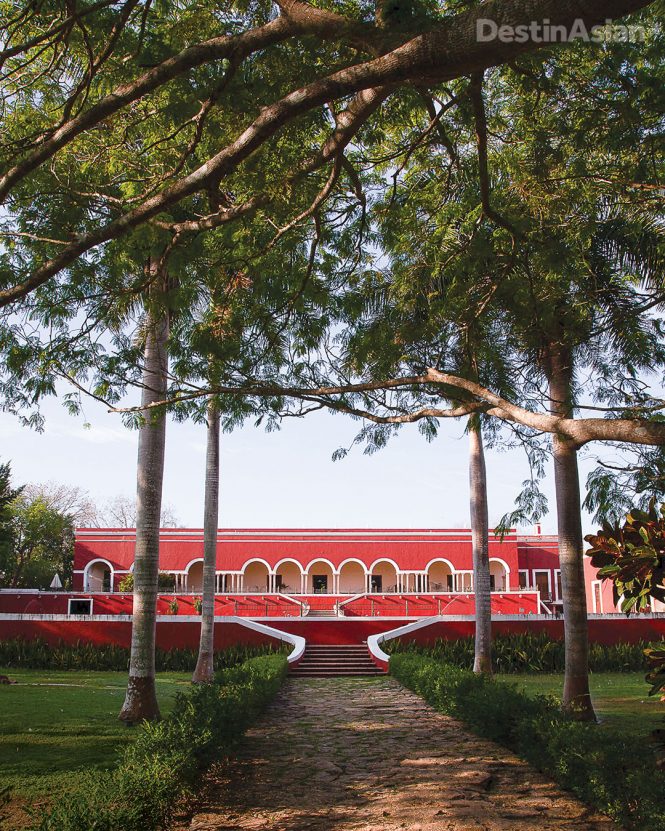 The entrance of Hacienda Temozón.

Cancún is all well and good for a beach break, but with a 12-year-old daughter and 10-year-old son in tow on our first family holiday in Mexico, my husband and I want them to experience more than just sand, sea, and resort buffets. So after a brief stay on the crowded coast, we rent a car and head inland, where the hinterland of the northern Yucatán Peninsula promises historic haciendas, ancient Maya ruins, authentic culture, and water-filled sinkholes called cenotes, perfect for a subterranean swim.

Following Mexican Federal Highway 180, which stretches from Cancún to Yucatán’s state capital, Mérida, and from there all the way up to Texas, we pass through mile upon mile of unbroken scrubland. With no visible waterways, it’s hard to imagine this arid territory once supported the flowering of Maya civilization.

Just north of the pretty colonial town of Espita, we turn off onto the rough track to Hacienda Kancabá, where we’ll be spending the night. It’s the end of a long dry season, and our car throws up clouds of dust as we rumble up to the restored 19th-century sugar-estate house. Our host, archaeologist Kam Manahan, is waiting at the top of an imposing set of steps to show us around. Verandas connect to four massive bedrooms with profoundly high ceilings. Walls are thick, and fans cool the hot April air. 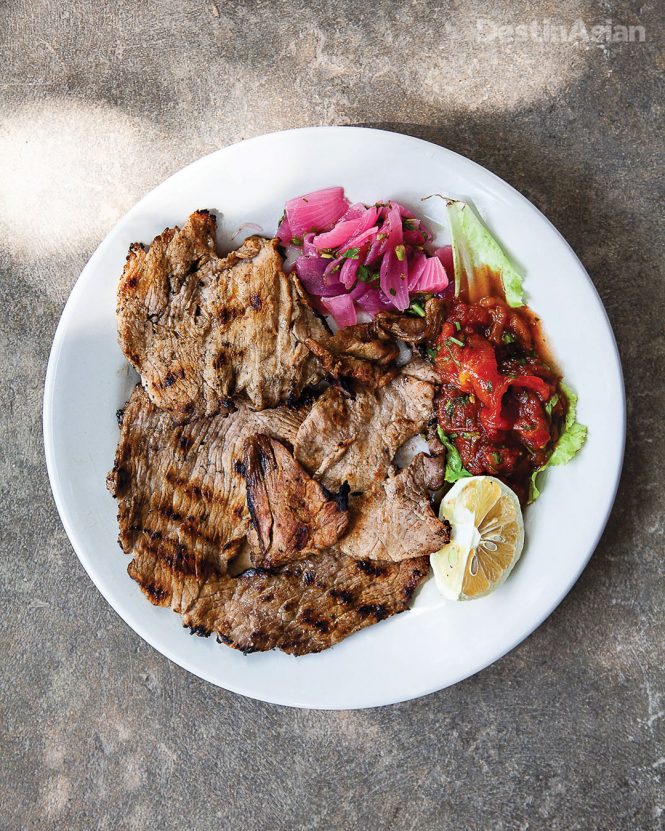 Soon enough, we find ourselves lolling about in the turquoise depths of the hacienda’s own cenote. Swallows swoop in and out of the cavern and small fish dart around our legs. For the ancient Maya, Manahan explains, cenotes were often considered the gateway to the underworld and the dwelling place of the rain god Chaac. They also provided water for villages and irrigation for the haciendas.

The next morning we venture out to Ek’ Balam. The archaeological site is compact, uncrowded, and, unlike at most other Yucatec ruins, visitors are permitted to scramble over the ancient structures and climb to dizzying heights. Ek’ Balam is dominated by the six-story Acropolis, and climbing this is no mean feat—think twice if you suffer from vertigo. Of course the kids, oblivious to heights and excited by the panoramic view, rush on ahead. Halfway up we catch our breath at the magnificently preserved tomb of King Ukit Kan Le’k Tok, who reigned in the late eighth century. The entrance is shaped like the jaws of a giant serpent and a hidden inner chamber holds the king’s bones, which were excavated alongside thousands of ancient treasures: pearls, jade, pottery, a golden frog, and a carved femur bone grasped in the skeletal regal hand. 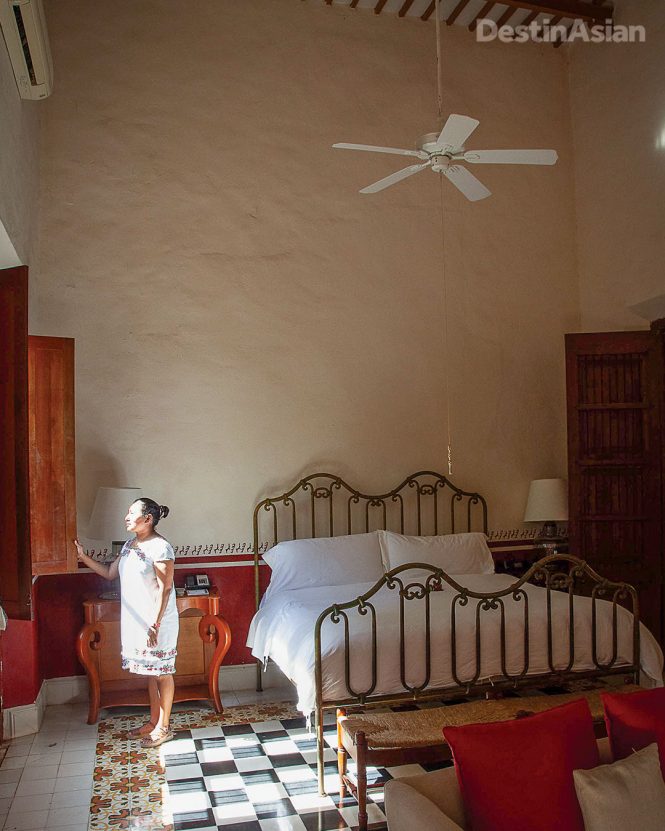 A room at Hacienda Temozón.

For lunch we head to the city of Valladolid, a mecca for globetrotting bohemians and fashionistas on the lookout for cool accessories and home decor. The low-slung colonial streetscape of Calzada de los Frailes is at the center of the action, its cobblestones lined with boutiques painted in soothing pastel shades. At the Coqui Coqui Perfumeria, which showcases fragrances inspired by the Yucatán’s herbs and flowers, the scents of blue agave, smoky tobacco, and pungent eucalyptus waft through the air. Farther along, a shop called KuxTal is filled to the rafters with some of the region’s best handicrafts, while La Sombrerería sells beautiful hats from the neighboring state of Campeche alongside bone-handled razors and kitchen knives.

The kids are getting antsy by the time we wander into Tresvanbien, but the restaurant’s peaceful courtyard proves the perfect lunch spot, and they’re soon in heaven with baskets of empanadas and giant glasses of fresh mango juice. Sated, we escape the city heat for a dip at the Cenote San Lorenzo Oxmán, a short drive out of town. Unlike our swim at Kancabá, we are not alone; but despite the crowd, this cenote is a winner. Monstrous tree roots dangle down the sides of the vast limestone sinkhole. The kids don Day-Glo life jackets and take to the enormous rope swing like Tarzan, hollering as they fling themselves over and over again into the limpid blue water.

Hacienda Temozón was founded as a cattle ranch in 1655 and became one of the Yucatán’s largest and most successful estates during the henequen boom of the 19th century. At the height of production, hundreds of haciendas from Mérida to Coba produced rope and twine from fibrous henequen plants, a species of agave known at the time as “green gold.” Indigenous laborers worked the farms as indentured servants, while their Creole overlords amassed great fortunes. The invention of synthetic fibers at the turn of the 20th century signaled the demise of the industry, and by the mid-1900s many haciendas had been abandoned. 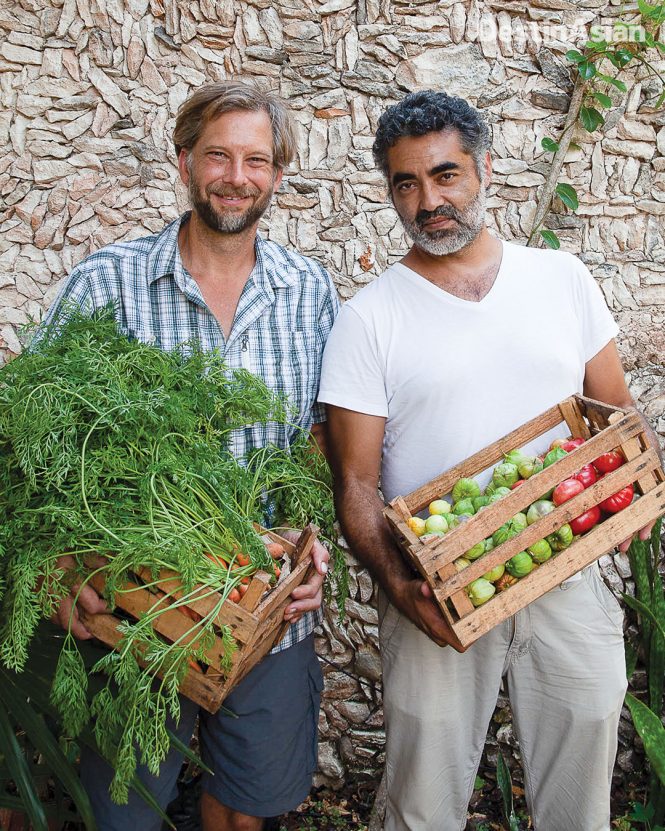 Fortunately, Hacienda Temozón has been restored to its former glory, and is now run as a 28-room resort under Marriott’s Luxury Collection banner. It’s a grand, rambling place with inner courtyards and colonnaded breezeways; our vast suite features five-meter ceilings with exposed beams and rafters, palatial beds, hammocks, and an enormous bathroom. In the extensive grounds outside, the kids stalk fat iguanas among the jacaranda trees.

It’s also just 45 minutes away from Uxmal, the jewel of Mexico’s “big three” restored archaeological sites. After a few days of going it alone, I’ve organized a private tour of the ancient Maya city with Catherwood Travels. The children groan as we coax them from the hotel’s massive pool to minivan; jaded by mediocre school trips, they are running low on expectations. But our guide proves them wrong. Hugo has that rare ability to hold the interest of both generations, weaving together history, culture, and lore with a sense of humor tossed in.

At Uxmal, priestly houses and temples have been restored, their elaborately carved facades covered with plumed serpents, jaguars, and eagles. We crane our heads to the heights of the magnificent Pyramid of the Magician as we learn about the golden age of Maya civilization from 200 to 900 A.D., when inhabitants built some of the most elaborate structures in the western hemisphere and astronomers mapped celestial movement with great accuracy, showing an intellectual sophistication rivaling that of ancient Greece and Rome. 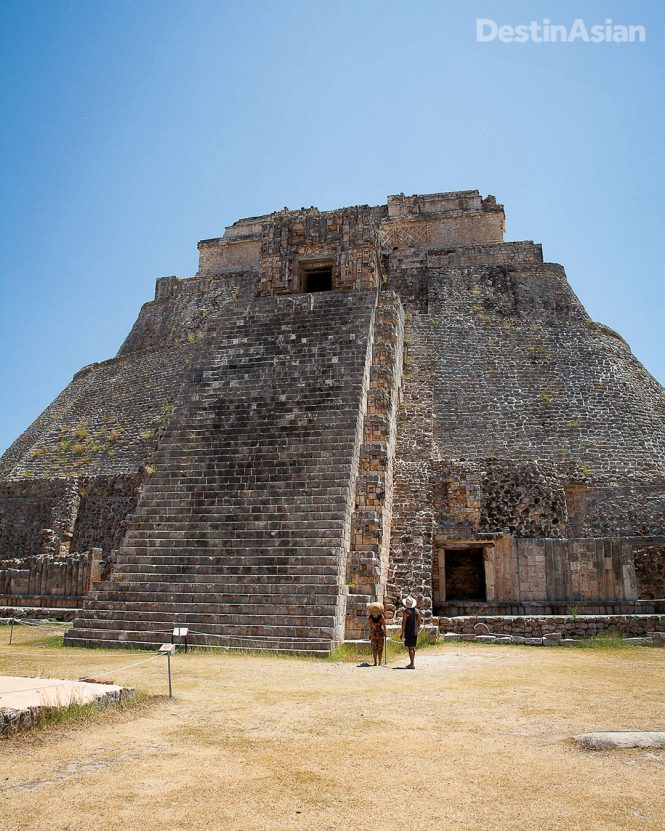 Uxmal’s well-preserved Pyramid of the Magician.

We skirt impressive ceremonial structures on our way out to our driver, who greets us with cool towels and a chest of iced drinks. These simple luxuries are spoiling, making us grateful we weren’t one of the ancients, hefting heavy loads of stone with no tools or draft animals to help with the burden.

Lunch surpasses all expectations. A table draped in white like a bride awaits us in the nave of the ruined chapel at Hacienda Xocnaceh. A giant palm tree now stands where Spaniards once prayed. It’s all rather splendid and the kids sit goggle-eyed as the butler serves a course of cochinita pibil: sweet, earthy pork and bitter orange with freshly made tortillas. There is no roof and the walls are crumbling, but this has got to be one of the most romantic lunches ever.

Mérida has plenty of other attractions besides. On the city’s main avenue, Paseo de Montejo, we amble past the astonishingly splendid mansions built by the henequen barons. At the Grand Museo de Mundo Maya, we learn about the dire consequences of hacienda agriculture for the Yucatán’s indigenous people, tens of thousands of whom were forcibly relocated to work the fields in what was de facto slavery. 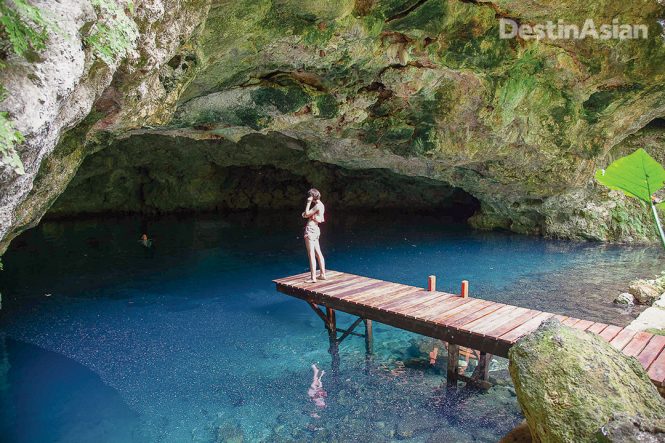 The cenote at Hacienda Kancabá.

Our last stop is Hacienda San José, a 45-minute drive east of Mérida near the hammock-making town of Tixkokob. A sister hotel to Hacienda Temo-zón, it’s an elegant property hidden away in lush gardens, where towering royal palms frame stone walkways and the sweet scent of frangipani blossoms drifts across the pool area. Exotic birds trill and chirp from the bushes.

My daughter is keen to visit the “Yellow City” of Izamal, which is just down the road. This is one of the most beautiful small colonial cities in Mexico, with a combination of stunning neo-Gothic architecture, ancient monuments, and cobbled streets. Long before the conquistadores arrived, Izamal was a popular pilgrimage site for Mayans paying respect to their sun god, Kinich Kak Moo. But in 1561, the Spanish, on the orders of Bishop Diego de Landa, razed the ancient temple and repurposed its stones for the construction of the Convent of San Antonio de Padua. Despite its unsavory heritage, the convent is a sight to behold, with a magnificent atrium whose size rivals only that of St. Peter’s in Rome.

We had planned to visit iconic Chichen Itza on our final day until a fellow guest at Hacienda San José tipped us off to the madding crowds he had experienced the previous afternoon. Instead, we spend the morning in the hotel’s swimming pool, where a giant stone slab rises from the water like the commemorative stelae the Maya often placed before their pyramids. The pool may not have the wild appeal of a cenote, but as a place to contemplate the wonders of the Yucatán, it can’t be beat. 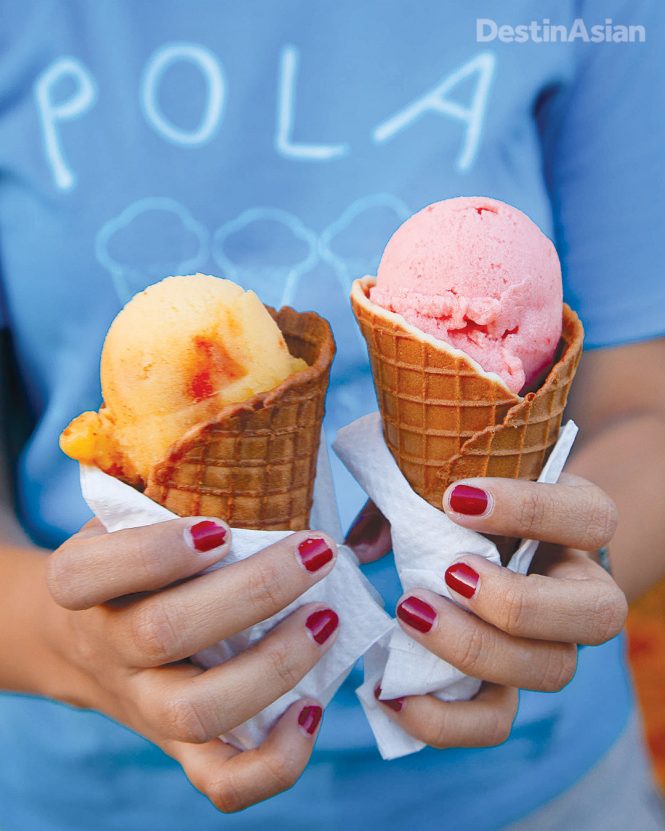 A sorbet break in Mérida.

This article originally appeared in the December 2019/January 2020 print issue of DestinAsian magazine (“My Oh Maya!”).