Full of southern charm, Taiwan’s massive port has transformed into a modern harbor city with an iconic arts venue, design-driven hotels, and more.

When was the last time you saw Taipei in the news? Ask any Taiwanese living on the island and the answer is likely to be, ‘it’s been a while.’ The once ‘invisible’ harbor city Kaohsiung has eclipsed Taipei and has been in the media spotlight ever since new mayor Han Kuo-yu came on board last Christmas. Han has sold the city in many creative ways, drawing visitors to the city for its New Year’s Eve countdown, Lunar New Year Lantern Festival by the Love River and, to be held in Kaohsiung for the first time ever, the Spring Scream music festival.

A slew of high-profile new openings has also contributed to local and international interest in the city. The industrial city Kaohsiung–never lacking in grit nor grittiness–is transforming into a modern harbor city with character. Arm yourself with our list of places to eat, drink, see, stay at, and go check out this southern city at the crux of change.

National Kaohsiung Centre of the Arts.

A city embraces the arts

Every city worth its salt needs an iconic performing arts venue and Kaohsiung has one, too. Its new crown jewel, National Kaohsiung Centre of the Arts (1 First Sanduo Road; +886 7 262 6666) opened last October. This architectural masterpiece by Dutch practice Mecanoo is quite a visual spectacle and the largest of its kind in the world. Inspired by the crown of banyan trees in the ‘hood and sitting on a former military space, it is an organically-shaped space that brings to mind the sway of banyan roots in the wind. Beneath the roof, a curved steel structure, is the Banyan Plaza, a generous, sheltered public space. It provides shade for Kaohsiung residents who weave through this space in the day and is quite literally an extension of the park. Where the roof meets the ground, the building morphs into an amphitheater, opening outwards to the park which becomes its stage. Hot on the heels of National Kaohsiung Centre of the Arts’ opening is the Alien Art Centre. (111 First Gushan Road; +886 7 9721685) During the early years when the Kuomintang government first arrived in Taiwan, defense of the island was a priority and Kinmen Island was an important military base on the front line. The Alien Art Centre was formerly the Kinma Military Hostel where army boys recruited for Kinmen—truly a lottery strike of the unenviable kind—would report and stay at before boarding the boat to the island. Today, property developer Yui Mom Group has given the art center a new lease of life as it supports artistic production, foster cross-disciplinary collaborations among thought-leaders and, in doing so, touch on pressing issues in our world today. Kaohsiung on a plate

Aside from night markets, the locals love a good lamb hotpot enjoyed on the streets. More than sixty years in the business, Shui Yuan (255 Third Qixian Road; +886 7 521 2590) uses fresh local mutton from Taitung and flavors the broth with Chinese herbs. It gets better with each sip, particularly when you steep a selection of seafood in the hotpot.

Given Taiwan and Japan’s historical relationship, there is a strong mutual affinity between both countries so it is no surprise that the three-Michelin-starred teppanyaki restaurant Ukai-tei (199 2nd Zhongshan Road; +886 7973 0189) has chosen Kaohsiung as the locale of its first outpost overseas. Opt for a seat by the teppanyaki bar to enjoy some culinary theatre; when your Australian wagyu beef is ready, pair it with a sake from a selection of award-winning and well-loved ones from the adjoining Dassai sake bar–the first outside Japan. One of the best ways to experience the Love River, Kaohsiung’s eternal heartbeat, is to dine at a Kaohsiung-style izakaya by the river. Qian Jiu (2-1 Hedong Road; +886 7 221 1266) offers a tasty menu of Taiwanese as well as big dishes like crab hotpot that go with their selection of beer and sakes. There’s even a singer belting out Mandopop every other evening. Enjoy a change of scene by heading to the harbor where the newly-opened industrial chic KW2, literally Kaohsiung Port Warehouse No.2, sits and order a locally-brewed, small-batch craft beer at Zhangmen Brewery (17 Penglai Road, +886 7 5517799). Have an Osmanthus Ale and the view to go with it.

After taking in the sights of Kaohsiung, wind down at Atman Space (194 Third Wenwu Road; +886 7 221 6456), a cafe and cocktail bar that shoulders the responsibility of triple duty – it has a reservations-only hair salon. This quiet bar tucked away in a small alley in a busy neighborhood is a real oasis of calm. Owner Asen has decorated the space with a small library of books, creating an atmospheric space for guests to enjoy classic cocktails like the Old Fashioned. Silks Club ( 199 2nd Zhongshan Road; +886 7973 0189; doubles from USD 576) is currently one of the most well-designed luxury hotels in Kaohsiung. The minimalist space is accentuated by the extensive use of North American Oak and pink Angola marble from South Africa creating a warm tone and atmosphere. A point of visual interest as you step into the lobby is the 4D kinetic installation art piece by German design team ART + COM. Titled ‘Dancing Particles’, it consists 168 metal spheres which are programmed to caress the water as they form elaborate moving shapes accompanied by music. It is a glimmering water dance which symbolizes Kaohsiung’s position as a glittering pearl in the ocean. Opt for rooms above the 17th floor for stunning views of the harbor.

On the same street, HOTEL COZZI Zhongshan Kaohsiung (260 2nd Zhongshan Road; +886 7 975 6699) provides a more affordable alternative with its pared-down interiors and rooms featuring floor to ceiling windows and abundant natural lighting. Cozzi The Restaurant on the 30th floor has great views of the city so head there for dinner and arrive early to to catch the city during the golden hour. 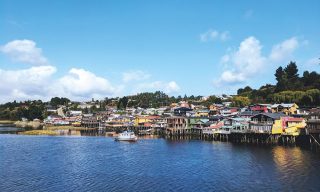 A Quick Guide to Chiloé Island in Southern Chile

The culture of Chiloé’s fiercely independent islanders is no less intriguing thanks to a unique f... 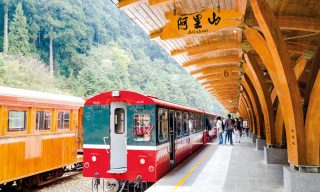 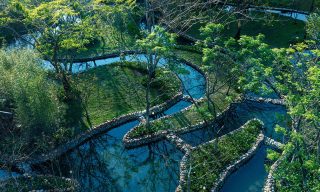 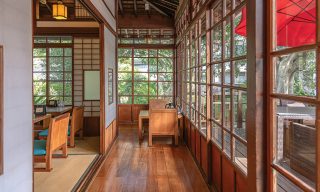