Any Londoner with a radar for a regenerated railway arch—the good ones receive quite a bit of Insta-attention—will have ambled through Bermondsey’s Maltby Street Market, a bunting-slung strip of food stalls sandwiched between a Victorian brick-built rail viaduct and a row of terrace houses. Weekends in this energetically crammed alley are a celebration of the British capital’s most successful small-scale culinary businesses. It’s where you go if you’re craving a slow-batch gin, an authentic German sausage, freshly baked dark-chocolate fudge brownies, or all of the above. The smell of fermenting sourdough wafts in the air and buskers keep feet tapping under tables teetering with drinks. When you take a look around, the elevated congeniality is palpable. Bermondsey is London’s “it” place to be right now.

Fronting the River Thames near Tower Bridge in the South London borough of Southwark, Bermondsey is an old waterside precinct that has evolved with an almost clichéd London history. In the mid-19th century it was home to one of the city’s most notorious slums, a shanty town described in Charles Dickens’s Oliver Twist as having “dirt-besmeared walls and decaying foundations, every repulsive lineament of poverty, every loathsome indication of filth, rot, and garbage.” The slums were cleaned up shortly after Oliver Twist was published in the late 1830s, but an industrial boom soon saw Bermondsey emerge as a hub for flour milling and leather tanning, industries too noisy, smelly, and polluting for central London. Fast-forward to today, and the relics of that era now endow the neighborhood with much of its character. Since the opening of the Bermondsey tube station 20 years ago, huge old riverside wharves built from blackened bricks and thick wooden beams have been reinvented as fancy loft apartments with water views. Former factories and warehouses, their industrial severity softened next to Victorian architecture, now host trendy co-working spaces and studios. Endearing cobbled streets and narrow walkways snake around rows of charming terrace houses and past cozy corner pubs. Add to that little pockets of public garden and a local square that hosts jazz weekends as well as a weekly antiques market, and Bermondsey stands out as a model urban village. Little wonder, then, that The Sunday Times newspaper last year named Bermondsey the best place to live in London, calling it the epitome of “the modern urban good life.”

A walk along Bermondsey Street confirms this. Flanked by a procession of old brick buildings, the area’s main thoroughfare could stand in as the set for an English rom-com starring someone Hugh Grant-ish. It’s dotted with curbside cafés that serve as the morning pit stop for cyclists on leather-seated bikes, and is graced with a lineup of authentic and suitably characteristic European restaurants. One of them, José Tapas Bar (104 Bermondsey St.), is a tiny corner spot with stool seating, wooden ceiling beams, and low-hanging Iberian ham legs. Patrons pack it each afternoon to drink cava and down plates of boquerones and patatas bravas. Across the road, behind an emerald-tiled shop front hung with geranium pots, The Garrison (No. 99-101) serves elevated gastro-pub fare—Cornish sole with sea herbs and brown butter; ham-hock croquettes with piccalilli—in a pretty space decorated with antique lampshades and reclaimed furniture. People-watching through the window here, Aperol spritz in hand, is one of life’s joys. A sign for oyster and seafood purveyor The Walrus & the Carpenter at Maltby Street Market.

On the culture front, there’s the nearby Fashion and Textile Museum (No. 83). Opened by designer Zandra Rhodes in 2003, the vivid pink-and-orange creative hub houses a textile studio and printing workshop alongside temporary exhibitions dedicated to the likes of Ottavio and Rosita Missoni and Orla Kiely. A short stroll south will bring you to the even more impressive White Cube Bermondsey (No. 144-152), the largest of three galleries owned by renowned art dealer Jay Jopling (the other two are in central London and Hong Kong). A magnet for London’s creative set, the 5,400-square-meter white-walled space—converted from a 1970s warehouse—hosts exhibition openings of high-profile artists such as Tracey Emin and Damien Hirst, and attracts a cool crowd that wouldn’t have been seen dead in Bermondsey a decade ago.

From here, it’s a 10-minute walk to the tallest building in the U.K., The Shard. Towering over the neighborhood’s western extremity and visible from all across London, the 95-story skyscraper was designed by Renzo Piano with 11,000 glass panels that glint in a pyramid of light. Home to a Shangri-La hotel, it also features The View from the Shard—360-degree viewing galleries on levels 68 to 72 that provide a dizzying vantage point over the city (access is free with a London Pass). When it opened in 2013, The Shard added another major tourist attraction to the area and generated improvements to London Bridge Station below it. The Shard rises above the Victorian wrought-iron roof of Borough Market.

Close at hand is the contrastingly historic London icon of Borough Market (8 Southwark St.). The city’s oldest market—it’s thought to have been around for at least a millennium—may not have the buzz of Maltby Street Market, but as a window on the past it can’t be beat. Under open-air railway arches held up by decorative wrought-iron columns, stallholders sell a cornucopia of exotic game, fish and crustaceans, oversize oysters, huge wheels of cheese, and farm-fresh fruits and vegetables. It’s the kind of place where you’ll still hear burly traders dropping a bit of cockney slang.

Another stretch of railway arches has evolved into the Bermondsey Beer Mile, a group of independent brewery bars and beer shops that provide the perfect excuse for a pub crawl. Most are open only on the weekends; start at Southwark Brewing Company (46 Druid St.)—it’s on the other side of the tracks from Maltby Street—and work your way down from there. An exhibition at White Cube Bermondsey, one of London’s top commercial art galleries.

Bermondsey’s northern boundary is the Thames riverside, a landscaped promenade with eateries, shops, and Hay’s Galleria (1 Battle Bridge Ln.), a handsome retail arcade redeveloped from the old wharf where tea clippers from China and India once docked. Sitting areas along the waterfront take in the blue spans of Tower Bridge and the HMS Belfast, a World War II navy cruiser turned museum permanently moored in the middle of the Thames.

During summer, the promenade hosts pop-up bars and film screenings. At any time of year, you can spend a day strolling along the South Bank, past Shakespeare’s Globe and Tate Modern all the way to the London Eye observation wheel. Then catch a Thames Clipper river taxi back. Boats stop conveniently at Bermondsey’s London Bridge City Pier, giving you one more reason to doff your hat to this loveable pocket of London. 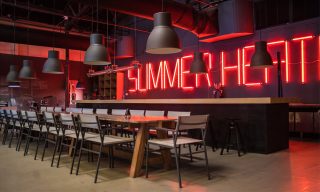 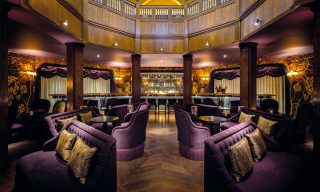 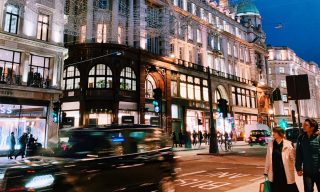 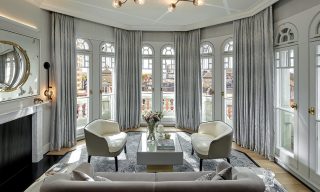