On the valley floor, broad expanses of dwarf bamboo and sedge meadows serve as a wintering ground for several hundred black-necked cranes. Cocooned in the Himalayas at an elevation of 3,000 meters, Bhutan’s Phobjikha Valley is breathtaking in more ways than one. It possesses a timeless beauty: pine-covered slopes frame wetlands and potato fields dotted with half-timbered farmhouses. On the valley floor, broad expanses of dwarf bamboo and sedge meadows serve as a wintering ground for several hundred black-necked cranes, which come to roost each October from the Tibetan Plateau.

The graceful birds have long been revered by the Bhutanese as auspicious harbingers of good fortune, and November 11 will mark the 20th edition of an annual crane festival held at the 400-year-old monastery in Gangtey village. Masked dances, short plays, and conservation-themed exhibitions put the spotlight on Phobjikha’s seasonal residents—the largest population of black-necked cranes found anywhere in the isolated kingdom.

Getting There
The Phobjikha Valley is a five- to six-hour drive on winding mountain roads from Bhutan’s sole international airport at Paro, where Drukair flies in from Bangkok and Singapore.

Where to Stay
Just a stone’s throw from Gangtey village, the 12-suite Gangtey Lodge (975-2/340-943; doubles from US$564) recalls traditional farmhouses but with the added comforts of plush bedding, heated hand-cut stone floors, and deep-soaking bathtubs.

Don’t Miss
A moderate four-hour hike from the small village of Longtey back to Gangtey, taking in a rhododendron forest and jaw-dropping views from the mountain pass of Kayche La.

This article originally appeared in the October/November 2018 print issue of DestinAsian magazine (“Flights Of Fancy”). 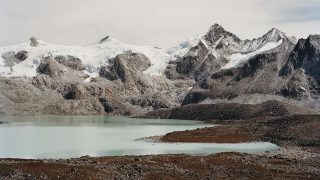 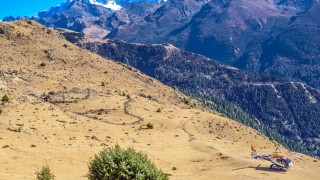 Flightseeing by Helicopter in Bhutan

In Bhutan, a new itinerary from the COMO group includes one of the most captivating helicopter fligh... 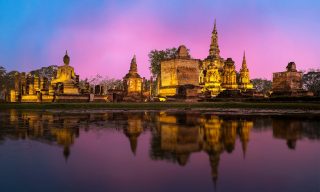 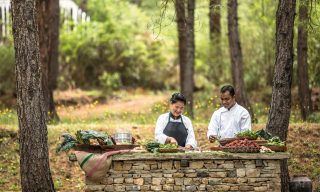