Above: Newly built pavilion links the Design Museum and the Museum of Finnish Architecture.

Not many world capitals can brag about heated sidewalks along their main thoroughfares. Fewer still have multiple art galleries in their international airport. And so far, I’ve been unable to identify another town with an upscale beer hall that also houses a sauna.

Helsinki is still something of an adolescent as European cities go, and its cobbled streets have a youthful vibe almost in spite of venerable landmarks like Upenski Cathedral, a photogenic behemoth of red brick and golden cupolas that lays claim to being the largest Orthodox church in Western Europe. Here, in the country that introduced the world to cellular phones and Angry Birds, I could drink pine-tar beer or cloudberry wine, or simply sweat away my troubles in a public sauna (or sow-u-nah, as the Finns pronounce it). In less than half an hour, I was able to stroll from the Burgher’s House, the oldest surviving wooden building in town, to the gleaming glass-and-copper Helsinki Music Center, the latest  addition to the low-slung skyline. And when it came to finding somewhere to stay, past and present proved equally companionable, from GLO Hotel Art, which inhabits an Art Nouveau–style castle built more than a century ago, to the fashionable Klaus K, a recently renovated property with interiors inspired by the Kalevala, Finland’s national epic.

Despite its many attractions, Helsinki, tucked away at the far end of the Baltic Sea, tends to be overshadowed by its larger neighbors Stockholm and St. Petersburg. This year, though, is different. On the 200th anniversary of its transformation from naval port to seat of government, the Finnish capital, chosen as the 2012 World Design Capital, has stepped confidently into the spotlight.

“We want to show the world what we’re doing,” tourism coordinator Milla Visuri told me when I visited her office. “Design is a part of everyday life here—it’s not just about products or exhibitions. It’s about designing experiences, making the city more inviting.” 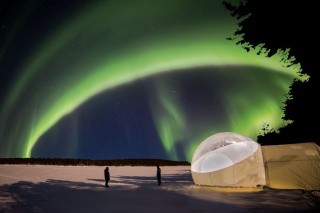 View the Northern Lights in Finland