TokyoLima. All photos courtesy of the restaurant mentioned.

Contemporary Nikkei cuisine takes center stage at TokyoLima, helmed by Peruvian chef Arturo Melendez and the latest offering from the Pirata Group. Arrive early to savor a cocktail by mixologist Isabella Vannoni in the standalone bar—the smoky negroni is a must—before making your way into the cozy, aqua-green dining room that’s dressed in bronze and aged leather. Standouts on the menu include hamachi and maguro tuna with shoyu citrus; the addictive “ki-mo-chi” fried chicken; and the signature La Causa, or prawn tempura atop delicate beetroot puree, charred avocado, and shrimp tartare. The food served at Bathers

Make the most of a day in Lantau with a meal at the newest beachfront bistro in the territory. Part British gastropub, part chic beach club, Bathers is located on Lower Cheung Sha Wan, one of the island’s most beautiful coastal locales. British chef Toby Barrett specializes in seasonal comfort food—beer-battered barracuda; salt-and-pepper squid; and grilled lobster with bacon and gremolata—complimented by a selection of surf-inspired cocktails such as the rum-laced Lantau Slushie, the perfect afternoon cooler after a few hours of hiking or sightseeing. If you’ve built up an appetite exploring Sai Ying Pun, one of Hong Kong Island’s most eclectic neighborhoods, head to Second Street for a meal at its chic namesake bistro, where you can expect generous portions from a menu of wallet-friendly dishes (served at both lunch and dinner) and some great happy hour deals. Look out for the likes of Dutch beef croquettes with traditional mustard mayo; mushroom and truffle flatbread; and, at 10 ounces, one of the city’s best beef burgers, served on Turkish bread. The food served at the restaurant

Hakkasan Mumbai and Kai Mayfair alumnus chef Kent Lee showcases his approach to pan-Asian fare at this months-old eatery in Lan Kwai Fong. An understated interior—replete with a feature wall suggestive of dragon scales and miniature lion-faced door knockers on every chair—sets the scene for delights such as roasted duck with caviar and homemade crepes; stir-fried paneer glazed in Sichuan chili bean sauce; and soft-shell crab with curry leaf. Match your dishes with cocktails themed after the five elements of Chinese philosophy: water, wood, earth, fire, and metal. May Chow—crowned Asia’s Best Female Chef earlier this year—is the latest restaurateur to attempt a reinvention of the humble Hong Kong neighborhood diners known as cha chaan teng. Bathed in neon with retro furnishings and a blaring ’80s soundtrack, her funky SoHo eatery prefaces dinner with creative cocktails like the Drunken Plums: a heady mix of Manzanilla sherry, dry London gin, and Shaoxing rice wine. Must-tries here are the Happy Paradise Cheung Fun, a playful take on steamed rice rolls made from pounded scallop puree; the jasmine tea–smoked pigeon; and the soul-soothing char siu silky egg rice. Purists will balk at the price, but it’s a bold take on Hong Kong’s past. Over in Noho, Timothy Oulton has opened its first restaurant beside the furniture brand’s two-story concept store on Gough Street. Here, head chef Arron Rhodes showcases his refined British cuisine, which has to compete with sophisticated interiors that include a large piranha-filled aquarium, leather-clad chairs, checkered marble floors, and a backlit Italian moonstone cocktail bar where drinks are inspired by Winston Churchill (the clarified tea punch is a party in your mouth). Both the à la carte and the nine-course tasting menus feature elegant renditions of classic bistro dishes, from grass-fed Australian steak tartare with piccalilli and anchovy mayo to Scottish brown crab and charred cucumber salad garnished with slices of green apple, seaweed, and a dollop of ewe’s-milk ricotta.

This article originally appeared in the October/November 2017 print issue of DestinAsian magazine (“The Guide (Hong Kong):Where to Eat Now”). 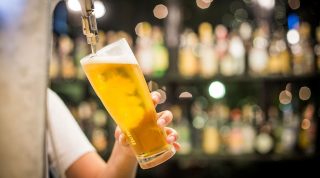 Go Bottoms Up at These Oktoberfest Events

Wherever you are, better mark your calendars with these overflowing-with-beer events. 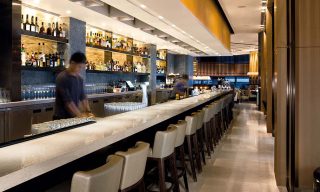 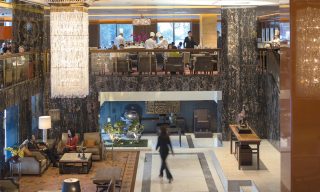 Benefits range from homemade treats and up to three hours of babysitting service to kids’ amenitie... 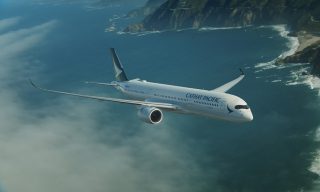