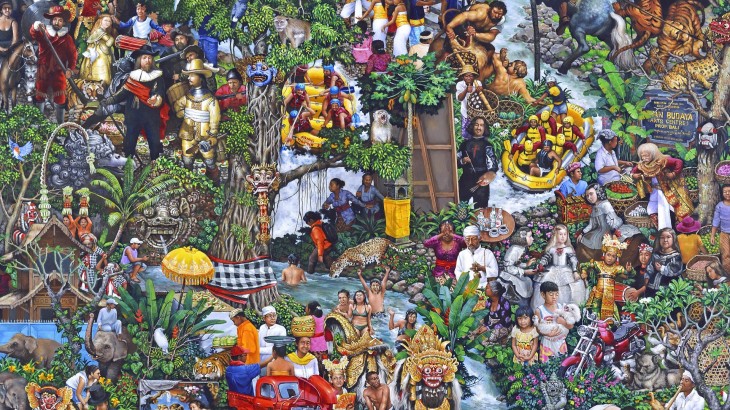 Indonesian artist Gede Mahendra Yasa, 47, captures the absurdities of modern Bali within his narrative canvases. From philandering tourists to non-indigenous wildlife to swashbuckling conquistadors, his detailed paintings demand exploration. His recent “Post Bali” exhibition explored three distinct realizations of the island through dissimilar painting styles. In the first room, his works from early 2010 feature photorealist painting in the context of Balinese life, followed by juxtapositions of absurd objects with traditional Balinese imagery, such as a massive Hindu god battling apes. In the second room, his most recent work melds teeming Balinese narrative styles of painting with miniature photorealist characters, alongside dual-pane Pollock-esque splatter paintings.

His thematic investigation of Bali immersed in various painting styles is as revealing as the chronological progression of his work. His large canvas paintings, such as the 75-by-300 cm “Contemporary Art in Paradise Lost,” took one year to paint. His productivity – averaging six to eight works per year – is not a result of indolence but rather the intensity of details he imbues spawned from intermittent periods of research. (Some surveys have motivated Yasa to explore traditional Chinese paints and Balinese paper-making techniques.) And, in person, Yasa is no different than his paintings would suggest, eager to bridge topics of existential passions with humble discussions of his creative motivations. Yasa’s work is rooted in modern Balinese painting styles yet touches on contemporary themes of the excesses of tourism, capitalism, and politics. Is he comfortable in this novel space between the two genres? Watch our interview with the artist for more. —Rachel Will