The Indonesian island is a melting pot of diverse cultural experiences that’s truly more than meets the eye. The Ksitigarbha Bodhisattva Temple is famous for its 500 life-sized lohan statues.

Part of Indonesia’s Riau Archipelago, Bintan island has always been a choice destination for travelers since its days as a trading post on the spice and silk routes that connected East Indies and China to the western world. Today, it is a popular tourist destination where one can discover traditional shops hawking local goods and explore photogenic alleys set against a backdrop of Dutch-inspired architecture.

Once upon a time, various kingdoms ruled Bintan and contributed to the island’s rich history and culture. Malacca, Srivijaya, Johor, Riau-Lingga, and Netherlands once occupied the island, each introducing their own religion, architecture, literature, and customs. As such, it’s no surprise to see old Buddhist temples as well as historic mosques on various parts of the island.

Those with an interest in the cultural background of Bintan will be pleased to find many beautiful places of worship across Bintan and its offshore islands, with one of the most iconic being the Sultan of Riau’s Grand Mosque located on the illustrious Pulau Penyengat Island. Other destinations to add to your check list include the Ksitigarbha Bodhisattva Temple, which is famous for its 500 life-sized lohan statues, as well as the Avalokitesvara Graha (Guan Yin) Temple that sits one of the biggest indoor Guan Yin statues in Southeast Asia at 16.8 meters tall.

Accessible from Tanjung Pinang via a 10 minutes pompong (water taxi) ride or a 45-minute drive away, Senggarang Village is known to be the first settlement of the ethinic Chinese in Bintan. Here, you will find the centuries-old Banyan Tree Temple and the historically rich Lau Ya Keng temple.

Another captivating spiritual site to visit is Grotto Santa Maria (Santa Maria Cave), where you will find a route leading to the 14 Stations of the Cross carved in limestone and a quaint chapel at the top of the trail.

The sea plays a big part in the livelihood of Bintan residents, evident from the fishing villages built along the coasts and traditional fishing boats that roam the sea day and night. Look out for the many Kelongs, which are offshore wooden platforms constructed for fishing; scattered at sea near the stretch of Trikora Coast. During off-days, the locals will also gather at the wooden huts that line the picturesque beach of Trikora Empat for a scenic picnic. The Panglong Village is the largest sea gypsy village in Bintan.

On a peninsula in the northeast, the orang laut (sea gypsies) tribe inhabits the Panglong Village, the largest sea gypsy village in Bintan. Visitors will find that the tribe continues to embrace traditional ways of living such as making their own fishing nets and building their own boats, even in the face of modernity.

Spot another interesting structure from the past here; beehive-shaped kilns used previously to create charcoal from mangrove wood, a practice that has been banned by the Indonesian government.

Tanjung Pinang itself, is also the largest town in Bintan and the capital of the Riau Islands.

The vast growth of tourism in Bintan is partly attributed to the openness of locals, who are friendly and welcoming. For travelers, the traditional market is a prime spot for meeting people from all walks from life, as well as taste local delicacies. The traditional morning market in Tanjung Pinang opens from morning till early afternoon. Here, one can shop for various commodities, from fresh fruits to spices to dried seafood, such as the island’s signature salted fish or ikan bilis. The traditional morning market in Tanjung Pinang opens from morning till early afternoon.

Craft lovers can head to Kijang, a town in the south region, famed for its art and souvenirs made out of seashells, fishbone, gong gong shells, and recycled material such as newspapers. Can’t resist a shopping spree or two? Head to the island’s shopping malls, such as Plaza Lagoi in Bintan Resorts and Tanjung Pinang City Center. The former welcomes locals and tourists alike with a range of dining options and attractions such as the newly opened trick-eye museum, Rumah Imagi, and Lagoi Bay Lantern Park.

When night falls, the island comes alive with activities spanning nightlife, supper, and more. If hunger pangs hit, head to Rimba Jaya and Akau Potong Lembu for a feast at the night markets also frequent by natives who flock over for delectable and affordable bites. Feeling adventurous? Embark on a Mangrove Fireflies Discovery tour over at Bintan Resorts. Check out the newly opened trick-eye museum at Plaza Lagoi.

With tourism becoming a key sector in the local economy, Bintan is set to become a favorite weekend getaway for Singaporeans especially, who can reach the island with ease via a 60-minute catamaran ferry ride.

From Lagoi Bay in the northwest to Tanjung Pinang in the south, quality hotels and dining options are aplenty, leaving travelers spoilt for choice.

Travelers are advised to rent a car with a local guide to explore the island, allowing them to customize an itinerary to their liking. One can simply share their interests with the guide and experience Bintan like never before.

This article was brought to you by Bintan Resorts. 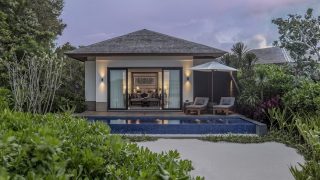 For travel-starved Singapore residents, the Cenizaro brand’s Indonesian outpost may be just the pl...