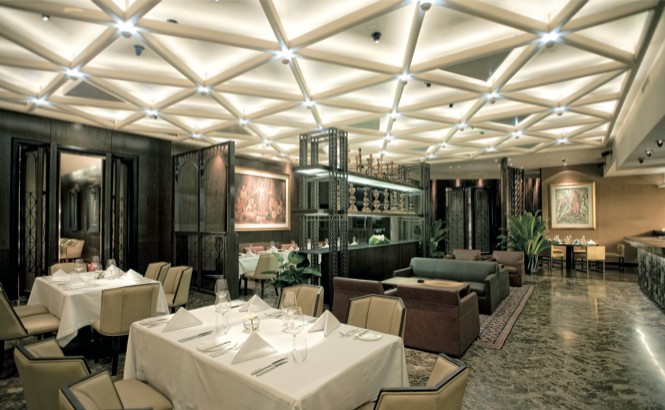 Given what a rare treat fine French dining is in Jakarta, Amuz is a welcome addition to the Indonesian capital’s restaurant scene. Chef-owner Gilles Marx, a native of Alsace, has crafted a broadly Gallic menu that, while playing it safe with straightforward classics such as sole meunière and suckling pig, is turned out with aplomb. The top-grade Wagyu tenderloin with bordelaise sauce is a guaranteed crowd pleaser, as is a fillet of pan-seared Tasmanian salmon served with capsicum relish and a touch of curry. Standouts also include a truffle-infused chestnut soup and braised veal sweetbreads accompanied by smoky Puy lentils and a rasher of pancetta. It’s all elegantly plated, with a setting to match. The restaurant’s obscure ingress—along an echoing corridor in the corner of a new downtown office tower—leads to a walnut-paneled dining room hung with canvases by noted Indonesian artists and fitted out with bespoke leather chairs, blown-glass objets, and ironwork detailing meant to recall the Eiffel Tower. Leave time to linger over dessert; for a taste of what Marx can do when he sets his mind to local ingredients, skip the crepe Suzette and order the caramelized Subang pineapple with banana cake and cinnamon ice cream (2/F, Energy Bldg., 11a Jl. Sudirman; 62-21/250-5064). –David Tse