Confusion, it is true, can be seductive. Most big Asian cities have this elusive quality, which sets them apart from the orderly and programed nature of their Western equivalents. I was, of course, familiar with it from years of living in Bangkok. But Jakarta seemed at once to take this sweet confusion to a very different level. I had expected, perhaps, a vestige of Dutch colonial neatness, or at least of the postcolonial city planning of the 1950s and ’60s. And these two things do exist in Jakarta, especially the nationalist grandeur of the urban visions of Sukarno, Indonesia’s first president. A civil engineer by training, Sukarno launched a monumental building spree meant to transform Jakarta from a colonial backwater to a showpiece of Indonesia’s arrival as a modern, dynamic nation: multilane boulevards; a 100,000-seat sports stadium; Modernist landmarks such as the massive Istiqlal state mosque and Hotel Indonesia; and the Monumen Nasional (Monas), a 132-meter-tall obelisk that juts symbolically—if not phallically—from the center of Taman Merdeka, the ceremonial square originally laid down by the Dutch in the early 19th century. But confusion seems to have come crashing in since those distant days. Even the Monas now feels like something from a distant, half-forgotten past. And the even older past—of the Dutch city of Batavia, with its graceful colonnades and Javanese limasan roofs—barely survives at all.

As I walked around Kemang during my first few nights, I wondered how old this South Jakarta neighborhood of winding lanes, little bars, and soaring condo towers might be. The towers were more glacially imposing and lofty than anything even in Bangkok. But there were also innumerable corners where guys stood around barbershops and two-bit drinking holes with jukeboxes and warung night food. There were 24-hour dim sum depots, and hookah joints, and pubs and clubs with terraces where girls in punk leather sat about with expressions of sly expectation—as if the night they were prowling through could bring surprises. There were pet shops and smart furniture boutiques (long since closed for the day), and sidewalks crammed with hipster locals and expat kids looking for fun. All of this gives Kemang an idiosyncratic vibe and cosmopolitan intimacy that seems entirely new to the city’s topography. And yet one can, with a little sweat, walk from 365 Eco Bar to a century-old mosque, and even within a single street one can pass (or so it feels) between decades.

Even far beyond Kemang, however, it felt to me that Jakarta is no longer content to be a sprawling mass of skyscrapers, fetid canals, and gridlocks, of commercial amnesia and anonymous architectural gigan-tism. Although neighborhoods like Kemang are admittedly few and far between, there is a new and fresh yearning for cosmopolitan elegance and pleasurable refinement in the air, a growing sophistication that one can feel throughout the tonier parts of the city. Where is all the money coming from? I wonder. Probably best not to ask. But wealth there is; according to a report by real estate firm Jones Lang LaSalle, Jakarta is one of the fastest-growing property markets in Asia.

The city is converging with the other great cities of its region. As trade grows with Hong Kong, Singapore, Kuala Lumpur, and Bangkok, Jakarta’s landscapes, social pleasures, habitudes, and sins come increasingly to resemble theirs. Christopher Koch’s 1978 novel The Year of Living Dangerously, about the turmoil of the 1965 coup attempt, now seems as distantly historical as the building in which many of its scenes were set, Hotel Indonesia. And yet the past still hovers within Jakarta —barely perceptible sometimes, but quietly present all the same.

It’s a slightly strange experience walking around Hotel Indonesia today; the property was closed for a four-year overhaul in 2004 and is now managed in sleek style by the Kempinski group. After my sojourn in Kemang, I moved to the Grand Hyatt next door, and from time to time I’d stroll over and wander through its renovated halls, perhaps hoping for a glimpse of the hotel that Koch described as riding “like a luxury ship in mid-ocean … With its restaurants, nightclubs, bars, swimming pool, and shops, it was a world complete. It was also majestically expensive, but heat or gastritis usually broke the resolve of those transients who tried the decaying colonial hotels of the Old City.” Back then, Hotel Indonesia, with its 14-story guest wing, was the tallest building in the city; today, it is dwarfed by its neighbors. On the first floor is a gallery devoted to the paintings of artists popular in the 1960s and ’70s—pieces like Djataju Fights Ramayana for Princess Sinta by Basuki Abdullah and Meeting in Bali by Alimin, which portrays three Balinese girls in Gauguinesque poses with flowers in their hair. It is nostalgic and folkloric in mood, but this room of local masters is the only vestige left in the hotel of that earlier era—a time that most Jakartans, I suspect, are happy to forget.

Which is not to say that forward-looking Jakarta is entirely shunning its past. Nearby, in the leafy old-money residential neighborhood of Menteng, not far from where U.S. President Barack Obama attended elementary school in the late ’60s, a much older structure, lately rechristened the Tugu Kunstkring Paleis, is done up like some grand Javanese salon circa 1914, the year the building was inaugurated.

Originally designed by the Dutch architect P.A.J. Mooijen as the home of the Batavia Art Circle before becoming an immigration office in the 1950s and, more recently, an ill-fated outpost of French lounge chain Buddha Bar (which was forced to close in the wake of protests by religious groups), the Kunstkring is now run by the Tugu hotel and restaurant group, who have returned it to its proper vocation again, as both an art gallery and fine-dining restaurant. Set under twin octagonal towers, the various rooms now shine with carved Javanese doorways, ornately carved mirrors, and period furnishings, while the menu is strong on old-style Indonesische dishes.

It’s a similar scene at other Tugu restaurants in the city, particularly Dapur Babah and Lara Djonggrang. Both are stuffed with antiques and bric-a-brac according to a historical theme (Peranakan in the case of the former; imperial Java in the latter)—a gesture that might come across as kitsch in a different city, but which in Jakarta fills a curious void, for between the humble warung and the five-star international dining scene Indonesian food had for a long time gotten a little lost. Indeed, during my visit I got somewhat addicted to exploring the fabulously decorated rabbit’s warren of rooms at Lara Djonggrang and eating satay on sticks inserted into a huge conch shell. It felt like the house of some wealthy Javanese aunt whose staff had just made dinner, a home away from home. And that note of affluent domesticity is what a huge and chaotic city needs. 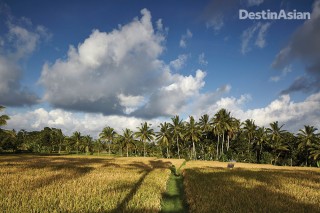