Reliving the golden age of train travel comes easy aboard the Eastern & Oriental Express, as a journey from Bangkok to Vientiane reveals

Under a vaulted iron roof on a steamy February afternoon, Bangkok’s Hua Lamphong Station seethes with commuters and travelers bound for the far corners of the kingdom. Porters push through the milling crowds behind trolleys piled high with bags and baskets and boxes. Bored kids chase each other around the concourse floor. There are ocher-robed monks with placid expressions, and harried ticket sellers struggling to explain the train schedules to a legion of backpackers. Departure announcements blare though loudspeakers. And high above the commotion is a gilt-framed portrait of King Chulalongkorn, the Siamese monarch who presided over the creation of Thailand’s railway. Looking dapper in a bemedaled parade jacket, plumed cavalry helmet in hand, Chulalongkorn died the same year this station was commissioned–1910–but his partiality for European architecture lives on in the aging building’s Neoclassical pilasters and stained-glass windows.

Following my escort onto the sweltering platforms, I can only imagine what the king would have made of modern Bangkok’s high-rise sprawl. Awaiting me, however, is an island of old-world calm where I suspect he would have felt right at home. The Eastern & Oriental Express, Southeast Asia’s only luxury train, sits on the tracks ahead, a line of gleaming green-and-beige carriages whose aura of anachronistic elegance channels a slower, more gracious era of travel.

Ensuring that my journey gets off to a civilized start, I’m met at the steps to my carriage by a Thai steward named Mon. Uniformed in a green silk vest that matches the train’s livery, he shows me to my compartment, where a garland of jasmine has been placed on the foldout table.

“You must be very comfortable here,” Mon says with a wai. Glancing around the wood-paneled cabin, with its brass fittings and handsome, hand-cut marquetry, I’m sure he’s right. But when Mon turns to leave and I ask for my key, he shakes his head. “No need, Khun Christopher. You can leave your door unlocked. We are a very safe train.” How’s that for civilized?

Hauled by a Thai Railways locomotive, the E&O’s 17 carriages stretch back almost half a kilometer. Perhaps because I’m a relatively spry 44-year-old–most of the other passengers are older couples from Europe or the U.S.–my allotted berth is toward the head of the link. This makes for a long walk to the dining cars and the library, where a resident palmist is on hand to decipher our destinies. Bringing up the rear of the train is the observation car, an open carriage finished in varnished Burmese teak that quickly becomes my favorite roost. When the train is moving, getting here involves staggering inelegantly down corridors barely wider than my shoulders. It’s worth the effort. As Agatha Christie once wrote, “To travel by train is to see nature and human beings, towns and churches and rivers, in fact, to see life.” Only in the observation car, embraced by sultry tropical air and the oily odor of the tracks, do I feel this connection so intimately.

Not that there’s all that much to observe as the train rumbles out of Bangkok’s sprawling suburbs. But soon enough we’re in the countryside, sipping drinks from the adjoining bar as the lowering sun casts its slanting light on rice paddies and palm groves. At one point, the train rolls onto a long causeway cutting across a lake. To everyone’s surprise, it judders to a halt halfway across the water. “Have we broken down?” someone whispers. An attendant quickly explains that this stop is for our viewing pleasure. The Pa Sak Cholasit, he explains, is central Thailand’s largest reservoir. It’s also quite scenic. We watch as fishermen in little wooden canoes work their nets along its forested shoreline.

Back in my compartment, I gussy myself up for cocktail hour and dinner. This proves harder than I would have expected. My small en suite bathroom is serviceable, but I struggle to wedge my nearly two-meter frame into the shower stall. Shaving on a moving train offers its own set of challenges. Yet I manage to make it to the bar car unscathed in time for second rounds. Perhaps half of the train’s 60 passengers are already there, which makes for a tight squeeze. But it’s an elegant assembly: the gentlemen are in suits or blazers, the ladies in evening dresses and pearls. I even spot a few tuxedos.

A gregarious Singaporean pianist with the unlikely name of Peter Consigliere bangs out jazz standards as bar stewards ply guests with aperitifs. The mood is convivial, and I soon learn that several of my fellow passengers are repeat guests. None have been on this route before–Eastern & Oriental only launched its annual three-night return trip between Bangkok and Vientiane in 2008. But at least two couples recount how they’ve done the train’s classic Singapore-Bangkok journey, while a Singaporean gentleman tells me he’s ridden the E&O into the hills of Chiang Mai. They’re ecstatic to be back on board.

When dinner is announced, we file through to pre-assigned tables in one of two restaurant cars. Like the compartments, these are decorated in an opulent Oriental Moderne style, with rose-shaped glass lampshades, embroidered valances, silk curtains, and more of that inlaid paneling. (I later learn that the look was inspired by the 1932 Marlene Dietrich film Shanghai Express, while the rolling stock itself was built in the 1970s for service in New Zealand, before being remodeled and regauged for its present occupation.)

My dining companions that night are an English retiree named Roy and his wife Anne. They turn out to be luxury-train buffs. Roy tells me they’ve ridden South Africa’s Blue Train from Pretoria to Cape Town (“Rather monotonous, all that veld”) and the E&O’s European sister, the Venice-Simplon Orient-Express, from London to Vienna (“Not nearly as splendid as this”). When our first course arrives–salmon with papaya salad on eggplant caviar–Roy sighs with pleasure, and does so again with each serving: crispy pla rad prik (fish in chili sauce); honeyed duck breast with Chinese pear and pine nuts; caramel mousse. I’m not sure how the kitchen staff manage it in their cramped galley, but the food is as elegantly plated as it is delicious. The only thing marring the meal is that we’re now being shunted onto another track, and the movement threatens to overturn our wine glasses. But Roy, veteran train traveler that he is, has a ready answer for that. “Bottoms up!” he says, downing a mouthful of Chilean Syrah.

In the mauve light of dawn, we roll across the Khorat Plateau, passing through ragged forest and rice fields alternatively heavy with grain or freshly burned off. When we ease into the railway halt at Hin Dat, Mon knocks at my door to clear away my breakfast tray and announce our first excursion. “The ruins of Phimai! Very old, sir.”

On the bus ride to the site, an enthusiastic Thai guide regales us over microphone with stories about ancient Phimai, which was built as an outpost of the Khmer Empire in the 11th century. As we pass through the dusty market town that now surrounds it, she points out the window to the crumbled remains of old walls that suggest a great city once stood here. The temple complex itself, however, is in remarkably good shape, having been re-constructed in the 1960s by Thailand’s Fine Arts Department. It may not be Angkor Wat, but it’s of a similar style, with arched gopura gateways, cloistered libraries and pavilions, and a central temple with a 28-meter-high sandstone prang (tower), all of it covered in intricate carving.

After lunch back on the train, we follow the rails to the outskirts of Khao Yai National Park, the kingdom’s oldest reserve. Here, our program promises “a delightful afternoon touring the vineyards and sampling the ‘new latitude’ wines.” However unlikely a pairing Khmer ruins and Thai rosé may sound for a day’s adventure, it proves an agreeable outing. We drive into the hills to GranMonte Estate, where Nikki Lohitnavy, Thailand’s first female enologist, shows us around a vineyard planted with Chenin Blanc, Syrah, and Cabernet Sauvignon grapes. We then take seats on a tree-shaded restaurant terrace for a tasting. “Très jeune, très jeune,” says a Frenchman at my table of the admittedly young Sakuna Rosé, named for Lohitnavy’s mother; but as we sample our way through the rest of the estate’s wines, we’re soon toasting Khao Yai as the highlight of the journey thus far.

The trip’s most anticipated moment comes the next day, when the train rattles across the Mekong River. The Friendship Bridge, a piered span connecting Thailand to Laos, only opened to rail traffic in 2009, and this marks the second time the E&O has crossed it. That might explain the enthusiasm with which we’re greeted at Thanaleng Station, three kilometers inside the border, and the only train station in Laos (apart from Bhutan and East Timor, Laos is, excepting this spur, the only country in Asia without a railway). After being garlanded in flowers and treated to a traditional dance performance, we climb on a bus emblazoned with a Day-Glo depiction of Ganesha for the hour-long drive into Vientiane.

Small and on the scruffy side, the Lao capital nevertheless has plenty to see. We stop at an old French villa now run as a textile workshop and showroom by American weaver Carol Cassidy, who works with a collective of artisans to produce beautiful silk scarves and brocades. We tour the great stupa of That Luang, a national landmark whose golden surface blazes like flame under the midday sun. And we linger over the Buddhist statuary enshrined at Haw Phra Kaew, a former royal temple that today serves as a museum. There’s even an hour of free time to wander unchaperoned through the shophouse-lined streets of downtown. I spend it sitting on the riverside promenade, gazing out at the Mekong. It’s dry season, and the water is low–so low that I fancy I could wade back to Thailand.

Instead, I reboard the E&O with everyone else, and cross the river in civilized fashion as the evening gathers. It’s only when I wander to the end of the train that it occurs to me that we’re moving in reverse–a grunting yellow locomotive is now hooked to the observation car. Apart from obstructing the views, this strikes me a rather ignominious way to return to Bangkok, tail-first. But back in the bar car, Peter the pianist has struck up another song. As the cocktails start flowing, no one gives a second thought to which way we’re pointing. We’re riding the rails again, and that’s all that really matters. 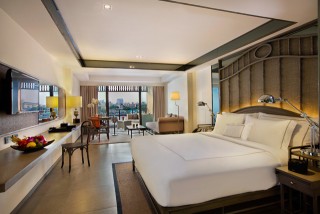 Checking In at Riva Surya

In the realm of Bangkok's riverside hotels, the Riva Surya is as a boutique gem with history to spar...