Just down the road from the main fish market in male, Maldivian hipsters are hanging out next to their mopeds, oversize pop-star sunglasses shielding their eyes. They’re keen to chat and eye up our cameras. Maybe they could get a little cash for an interview? Another man wobbles past with very red eyes, clearly unstable on his feet. Heroin dealers lurk in the dockland’s shadows, peddling a crude form of the drug known as “brown sugar.” Passersby warn me to watch out for pickpockets; I pat my thigh to make sure my mobile phone is still there.

That’s the bleaker side of life in the Maldives. It’s little wonder that Male (pronounced maa-leh), the islands’ congested capital, is overlooked by most inbound travelers, who typically land at the international airport (located across the channel on Hulule Island) and transfer by boat or seaplane to any one of 90 or so luxury resort islands. Those who do visit perhaps spend an afternoon hunting for souvenirs. Most vendors will happily accept U.S. dollars or credit cards over the local rufiyaa.

But it’s in Male that you come face to face with the real Maldives—the good and the bad—in a way that you can’t do on a resort island, which by law are segregated from the Muslim communities on “local islands.” You’ll have to make do with tea or a terrible-tasting, nonalcoholic “strawberry beer” if you fancy a drink, but there are plenty of places to eat. You can stroll the whole city in a few hours. At the sports ground, I come across maroon-clad cricketers in batting practice, the crack of the ball carrying out to the sea road. And there’s a party of sorts taking place at a community center, where young boys, six or seven years old, are recovering after circumcisions at the local hospital. An uncle is daubed in red dye, helping them celebrate. Tomorrow they go home as men.  In Male, one also gets the clearest sense of the challenges facing this famously beautiful nation. Scarcity of habitable land is one. The island covers just 2.5 square kilometers, yet is home to about 100,000 people, almost a third of the Maldives’ entire population. Buildings and houses occupy practically every parcel of real estate, and the narrow streets are often choked with vehicular and pedestrian traffic. To ease the crowding, the government has created a 195-hectare artificial island nearby, Hulhumale—the name means “New Male.” The perfectly rectangular mound of reclaimed coral sand is designed to accommodate 150,000 people by the time it is completed in 2020; for now, only 5,000 live there, in hulking apartment blocks surrounded by empty gravel lots and wide, empty roads.

Tellingly, Hulhumale has been built two meters above sea level, making it something of a mountain among molehills. The average elevation of the other 1,192 coral islets in the archipelago is less than half that, which brings us to another of the country’s profound concerns: inundation. Male itself is now ringed by an ugly concrete seawall, built following a 1987 tidal surge that flooded the capital, causing millions of dollars in damage. But even that failed to stop flooding during the 2004 tsunami, which submerged much of the Maldives for several minutes, causing an estimated US$470 million worth of damage and killing at least 82 people.

And a direr prospect than tidal waves is the rising sea levels attributed to global warming. President Mohamed Nasheed, who was sworn in last November after unseating his long-standing predecessor, Maumoon Abdul Gayoom, considers climate change to be an immediate threat to his country. As such, he has announced plans to create a “sovereign fund” that, if need be, could be used to resettle the entire nation—perhaps to Sri Lanka, India, or Australia.

Nasheed, a 42-year-old former journalist and political exile known among his supporters as Anni, is the country’s first democratically elected leader, and his presidency has been ushered in with the same sort of populist fervor that accompanied Barack Obama to the White House. Walking the streets of Male, I notice graffiti left over from the election battle: All We Need Is Change, reads one red-lettered scrawl. After 30 years of autocracy under the Gayoom regime, Maldivians are ready for a new era.

What that new era might entail, it is too early to tell. Nasheed had been arrested several times since the mid-1990s for criticizing the Gayoom government, so one would expect that democratic reform—particularly with regard to free speech—might be on the agenda. But he did astound observers last March when he announced that the Maldives would become the world’s first carbon-neutral country within a decade.

“Climate change isn’t a vague and abstract danger but a real threat to our survival,” Nasheed wrote in a letter published in Britain’s Observer newspaper. “… In a grotesque Faustian pact, we have done a deal with the carbon devil: for untold fossil fuel consumption in our lifetime, we are trading our children’s place in an earthly paradise. Today, the Maldives will opt out of that pact.”

Accordingly, the government says it has been working with international climate and energy experts to draw up a plan that will allow the country to make a “radical switch” from oil to renewable energy production over the next 10 years. This will likely involve a substantial investment in solar panels (already used to power the street lights on Hulhumale) and wind turbines, but it will also mean encouraging a greener form of tourism, an industry that generates more than US$200 million dollars a year.

Some resorts are making the leap already. The Alila Villas Hadahaa, for example, has been built to comply with the certification standards of Green Globe, an Australian NGO that sets stringent ecotourism guidelines. Due to open this summer in the North Huvadhoo Atoll, the resort promises such innovations as rainwater harvesting, state-of-the-art waste-treatment plants, and room designs based on natural ventilation and shading.

Farther north in the Baa Atoll, a 30-minute seaplane ride from Male, the 14-year-old Soneva Fushi plans to make itself carbon neutral by next year. The resort has already installed a pipeline that brings cold seawater up from the ocean depths to cool the rooms, reducing the need for conventional air-conditioning. It has also introduced a reverse-osmosis system that converts seawater into drinking water. In the works is a centralized solar-power plant that uses a parabola to capture the sun’s rays, then heat water and ultimately turn a steam turbine, generating electricity.

Jürgen Seidel, the group director of property maintenance at the resort’s management company, Bangkok-based Six Senses, says the deep-sea cooling system reduces energy consumption on the property by 80 percent. And the solar plant, being built by a German manufacturer, should allow the resort to have both backup energy and enough oversupply to provide electricity to the neighboring local island, Eydhafushi, where many of the staffers live.

“You can’t stand on one leg only, so you have to have a backup,” Seidel says. “But then you can work 365 days per year, only with resources produced locally and on the island. It’s a big plan.”

Tourism, of course, doesn’t have all the answers. And if sea levels do rise, carbon neutrality for the Maldives as a whole could be a moot point anyway. But in the meantime, this Indian Ocean nation has reason to be guardedly optimistic about its future.

Back in Male, I meet Abdulla Luthufee, a former revolutionary who was sentenced to death for treason, but served 16 years of a 25-year sentence after it was commuted to life. Now under house arrest in a cramped apartment down one of the city’s narrow roads, he says he sometimes shared the same prison digs as Nasheed.

Luthufee is not an ardent supporter of the current government; he suspects that Nasheed will fall short of his lofty promises, and doubts he’ll make much of a dent in the country’s widespread corruption or urban drug problem.

But it’s a start. Luthufee sees the chance for a better future for the Maldives. “People’s power is back, and it has just begun with this government,” he says. “Democracy is what we needed, and now we have got it.” 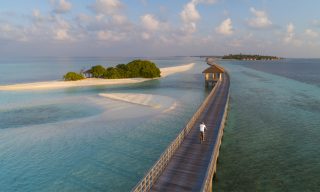 5 Reasons to be Excited About The Residence Maldives at Dhigurah 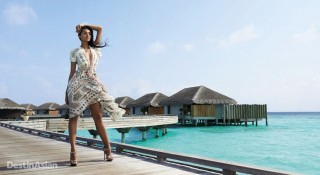 Lapped by the translucent waters of the Maldives’ Noonu Atoll, Velaa Private Island sets a sumptuo... 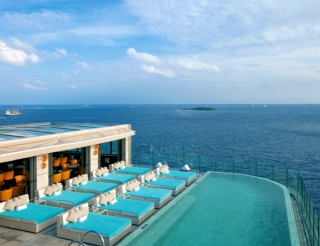 Resort-bound travelers can finally look forward to a comfortable layover in the Maldivian capital. 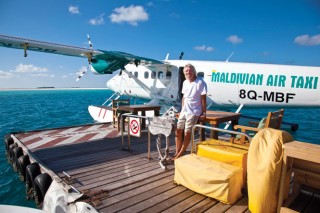 Though he will soon be rocketing wealthy tourists into space, Sir Richard Branson’s more immediate... 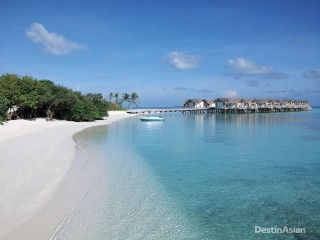 Culture and Comfort at the Maldives’ Only Art-focused Resort

Loama Resort Maldives has all the trappings of barefoot luxury while providing a showcase for Maldiv...

5 Reasons to be Excited About The Residence Maldives at Dhigurah

The Residence Maldives at Falhumaafushi now has a sister resort on a neighboring island in the south...