One artist and his family are helping to save Myanmar’s puppetry tradition.

Lights dimmed, the marionettes in their delicate sequined costumes come alive, dancing and swirling, transporting enraptured viewers to a world of mystical beings, animals, and royal characters. Burmese puppet shows typically run from sunset to sunrise, but here at Htwe Oo Myanmar, a small theater based out of a first-floor apartment in Yangon’s Ahlone township, the Jataka tales of Buddha’s past lives are condensed into an animated 45-minute performance.

As a child, Khin Maung Htwe (U Htwe) often accompanied his mother to traditional all-night puppet shows. His love for Myanmar puppetry would eventually spur him to quit a well-paying job on container ships to pursue his dream of running a marionette theater. He started Htwe Oo Myanmar in Yangon in 2006, and has since been on a mission to revive this traditional performing art. Myanmar puppetry, or yoke thé, dates back to the 15th century when it was used to entertain the royal courts. Its popularity declined with the advent of cinema and television, and marionette performances eventually fell out of favor with the authorities. According to U Htwe, the previous government—widely regarded as a puppet of the military junta—did not support the craft as it disliked the word “puppet,” and even banned the term in newspapers.

In the North Okkalapa township, an hour’s drive from downtown Yangon, U Htwe introduces me to a brother and sister whom he proclaims as the best puppet-makers in the country. Marionette puppetry here is typically a family trade—the skills are passed from one generation to the next. In this case, the puppet-making duo are continuing the legacy of their late father, a yoke thé master. The sister stitches the elaborate outfits and the brother sculpts the wooden body parts; his wife performs with Htwe Oo Myanmar. A marionette of Taw Belu, the “jungle ogre.”

U Htwe sees himself as a bridge connecting the few remaining old practitioners and the country’s young generation. He works with two octogenarian puppet masters whenever his troupe performs at home and at major shows in Bangkok, Singapore, and even Western Europe. Sadly, the recognition gained overseas hasn’t translated to a greater appreciation of the art form in Myanmar itself. Few young people are interested in puppetry as it does not provide a stable income and is considered unfashionable.

U Htwe is trying to change this with his own family; he proudly tells me his 12-year-old son is the country’s youngest puppeteer, while his wife and daughter also perform during the nightly shows held at the makeshift theater inside their living room. But U Htwe’s ambitions are greater than running a private yoke thé venue. “I have a very big dream,” he says. “I want to create a puppetry museum and center in Myanmar because there is none here … [to preserve it] for my son and daughter, for their generation.” 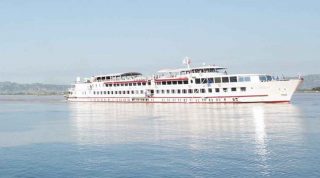 Pan Pacific to Open in Yangon

The opening of the 336-room Pan Pacific Yangon proves that the city has finally found its groove.