Call it a villa or a bungalow, but the overwater hotel room has come a long way since its inception in the South Pacific 50 years ago.

Glass floors, butler service, infinity pools, private patios with steps leading down to an azure lagoon—these are just a few of the lavish touches we associate with overwater villas today. But the concept of perching hotel rooms above the sea has much humbler beginnings. Back in 1967 in the Society Islands of French Polynesia, a trio of Californian entrepreneurs known as the Bali Hai Boys decided to emulate the design of traditional Tahitian fishing huts by creating rustic overwater bungalows at their hotel on Raiatea, which lacked a beach but had a beautiful reef. The idea was not an instant hit. Still, the Americans recognized its potential and quickly improved on the formula in Moorea, building larger rooms and inserting glass panels in the floors (“Tahitian TV,” they called it). The now-defunct Hotel Bora Bora followed suit in the 1970s, adding 15 stilted bungalows to its repertoire and charging just US$65 a night for the privilege of sleeping above the waves.

The rest, as they say, is history. The trend took off across the South Pacific and beyond, with accommodations growing ever more luxurious as the decades passed. From the Maldives to Malaysia, Cambodia to the Caribbean, here are 10 resorts that best epitomize the evolution of the now iconic overwater villa. The volcanic peaks of Mount Otemanu provide a dramatic backdrop to the St. Regis Bora Bora. All photos are courtesy of the property mentioned, unless otherwise stated.

In the archipelago where it all began, the St. Regis Bora Bora stands out as much for its generously sized overwater bungalows as for its round-the-clock butler service. Backed by Mount Otemanu and suspended over one of the most beautiful lagoons on the planet, the thatched-roof villas come with everything you’d expect in this part of the world: tasteful Tahitian-inspired furnishings, glass floor panels, whirlpools, and spacious outdoor terraces with direct access to the reef (doubles from US$1,454). On the jetty connecting Le Taha’a Island to its bamboo-sided Overwater Suites. Photo from Getty Images.

A 35-minute boat ride from from Raiatea, Taha’a is known for its vanilla plantations, pearl farms, and jungle-clad mountains. It’s a dreamy backdrop for this intimate resort, set offshore on the coral islet of Tautau. The Overwater Suites here are the epitome of Polynesian style, crafted from bamboo and other local materials and featuring decks from which guests can kayak to and from their room (doubles from US$1,670). Aerial shot of the resort

Despite its bountiful natural assets, Fiji has been slow to adopt the sleep-where-you-swim trend. Leave it to Marriott to make up for lost time. The group’s debut Fijian property, which opened in April at Momi Bay, is the first to bring overwater villas to the main island of Viti Levu. Styled after the local bure, they’re decked out with Fijian motifs and natural materials—simple yet sophisticated so as to not distract from the eye candy outside (doubles from US$556). The view of the sea from one of the rooms. The overwater suites at COMO Cocoa Island take their shape from the traditional Maldivian dhoni boat.

Short on real estate, Maldivian resorts began building villas over the water almost three decades ago, and collectively they’ve pretty much perfected the form. So it’s hard to single out a favorite (for four dazzling newcomers, see this issue’s Maldives feature). That said, Cocoa Island in the South Male Atoll deserves a shout-out here for its Dhoni Suites, the only overwater accommodation in the country shaped like the traditional dhoni fishing boat. White-on-white interiors with pops of blue are the embodiment of understated elegance, while private terraces allow for easy access to the lagoon (doubles from US$810). Aerial shot of the property. One of Pangkor Laut’s villas.

With its opening in the early 1990s, Pangkor Laut, the sole occupant of a lush, 120-hectare island in the Strait of Malacca, was one of the first resorts to take the overwater concept beyond the South Pacific. There are hillside and beachside villas here as well, but the money shot has always been the Sea Villas: pitch-roofed wooden chalets perched above a shallow bay. Deck chairs are not the only place to soak up your surrounds; floor-to-ceiling windows in the bathrooms mean unobstructed ocean views from the shower and deep soaking tub as well (doubles from US$357). The beach in front of the resort. 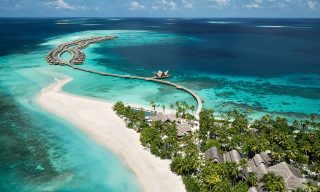 Most of the interiors are the work of Istanbul-based outfit Autoban, which has layered the property ... 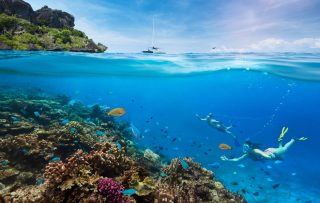 4 Things to Do on Your First Trip to Fiji

Seeking an island getaway? Consider a sojourn in Fiji, the jewel of the South Pacific.