Metro Manila’s latest restaurants are blazing their own culinary trails and setting the tone for a vibrant dining scene. Here are six places worth seeking out. Tamarind Chicken at the Pigpen.All photos courtesy of the restaurants mentioned.

Specializing in fusion cuisine, this laid-back Makati venue is the brainchild of restaurateur Berna Garriz and chefs Tricia Macdonald and Carlos Garcia. The winning formula is the chefs’ use of European culinary techniques on Asian ingredients, covering a wide range of dishes such as sisig poppadum, pork-belly kimchi, and Thai-inspired beef brisket. The clean, contemporary interior with industrial accents makes for a lovely spot to while away a few hours, with cocktails like the house sangria and calamansi mojito from the restaurant’s bar highly recommended. With chef Jordy Navarra at the helm, this pared-down space on Makati’s Chino Roces Avenue gives old Philippine favorites the shock of the new. While Filipino food purists may balk at the reinvented, semi-deconstructed fare at first, there’s a good chance that they’ll be won over by oysters flavored with sugar cane wine and served on a bed of corals, a playful garden vegetable salad that takes its cues from the folk song “Bahay Kubo,” and grilled loin and belly of milkfish served with Navarra’s rendition of the breakfast staple silog—using sticky fried rice, dried fish skin, and raw egg yolk (63/917-720-8630). Inside The Ping Pong Diplomacy

The cheeky name refers to one of the milestones of the Cold War era—the games between table tennis players from the United States and China in the early 1970s that paved the way for President Richard Nixon’s visit to Beijing. As such, the latest establishment from Charles Paw’s Tasteless Restaurant Group serves up Chinese–American fare courtesy of chefs Him Uy de Baron and Noel Mauricio. Some food critics have referred to the food as “bastardized Chinese dishes,” but Paw takes that criticism in its stride—with quirky, flavorful items such as wonton cheeseburger, surf and turf noodles, cranberries and tofu, and shumai yielding edamame and three kinds of mushroom. The restaurant’s interiors reflect the same sensibility, with a feature wall that has mannequin hands holding ping pong paddles.

Chef Josh Boutwood brings sophistication to each and every plate served at this reservations-only venue sequestered in Bistro Academy on Makati’s Kamagong Street. It’s a casual service affair with just two communal tables for 22 patrons—yet the impeccably plated six- to eight-course meals have a fine dining vibe. The ever-changing seasonal menu rarely puts more than three ingredients in any given dish. Instead, Boutwood uses multiple techinques to play up the essence of each element, with one example being pan-fried duck served with carrot puree and onion ash to represent the flavors of the hunt.

If you’re in Kapitolyo, head to chilled-out Locavore for some hearty Filipino comfort food and a smattering of modern takes on popular age-old classics. As evinced by its moniker, the restaurant takes pride in using locally grown, locally produced, and locally made ingredients for its dishes. Bestsellers here include the five-hour braised boneless lechon (roast pork) belly, the chorizo burger, and various incarnations of kinilaw, or Filipino ceviche. True to its name, Hook relies primarily on fresh catch, with brassy nautical-themed decor as a backdrop. Its centerpiece is a raw bar, which displays tuna, oysters, and other treats from the ocean. If you’re coming with a group, consider ordering its three platters stacked atop one another like an indulgent, seafood-themed high tea: think Aklan-sourced oysters, scallop motoyaki, salmon sashimi topped with ginger-scallion jam, and tuna poke served in a young coconut. Meanwhile, à la carte favorites include salted egg prawns, blackened tuna loin, miso-glazed salmon, as well as the inspired and irresistible pairing of white fish and crab-fat polenta (63-2/960-2248).

This article originally appeared in the August/September 2017 print issue of DestinAsian magazine (“Manila by the Mouthful”). 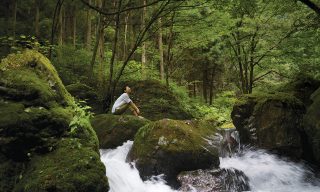 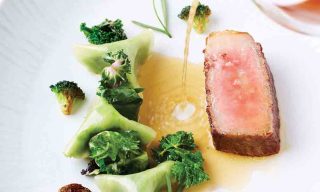