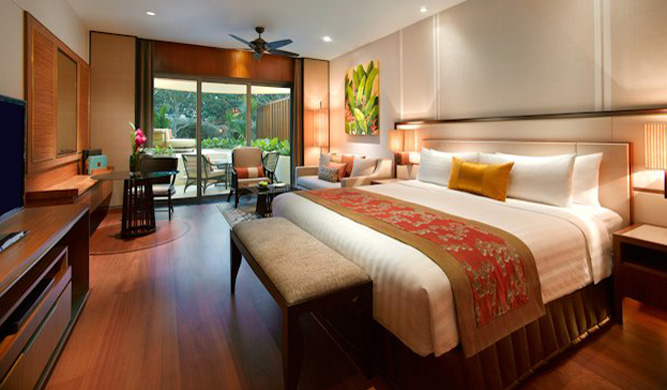 Above: A Garden Wing Deluxe Room.

The Garden Wing of Singapore’s Shangri-La hotel has reopened following an extensive eight-month revamp. First launched in 1978, the wing opened as a resort-style retreat set amidst 6.5 hectares of tropical greenery in the heart of the city. While the lush surroundings—complete with koi ponds and a waterfall—remain, the wing has undergone a tip-to-toe renovation and now features 158 nature-themed deluxe rooms, one-bedroom suites, and premier balcony suites. Each of the guestrooms has a bougainvillea-laden balcony, and the premiere suites boast private balconies with a Jacuzzi, a sundeck, and a barbecue grill.

In addition, Singapore’s first CHI Spa, a signature spa of the Shangri-La Hotels and Resorts group, is scheduled to open in the wing in July.

The 747-room hotel, which opened in 1971, is Shangri-La’s flagship property. It consists of three wings, including the Tower Wing, and the Valley Wing.