Above: Passing Taipei’s Guandu Temple on the way to Danshui.

A series of scenic bike routes lie within easy striking distance of Taipei.

Hemmed by forested mountains and within pedaling distance of Taiwan’s northern coast, Taipei makes an ideal hub for bicycle touring. Public and private efforts to promote cycling here have given rise to scores of rental companies that charge only US$3 per day for a well-oiled 21-speed mountain bike. Taipei teems with them. Meanwhile, the railway system is retooling to let passengers walk their two-wheelers aboard, and bike only trails are being extended or upgraded along riverbanks and stretches of cliff-hugging coast.

Admittedly, not every vista cries out for a photo op—most rides, at some point, run up against gritty construction sites, dilapidated housing blocks, or traffic. But all that makes you appreciate the better scenery ahead. So grab a good road map from any bike seller or rental station, quiz your concierge, limber up, and get ready to experience a side of Taiwan that most visitors miss. There are plenty of routes to choose from: the four half-day trips that follow are among the most scenic.

A tight chain of volcanic peaks separating the Taipei basin from Taiwan’s north coast, Yangmingshan National Park beckons bicyclists in search of distant ocean views and fresh mountain air. It’s unavoidably steep, but most of its roads are well built and lightly trafficked.

From the Tienmu Baseball Stadium north of downtown Taipei, take Dongshan Road Lane 25 into the forest-covered hills. Follow this route to the roadside lookout at the Chinese Cultural University, then drop eastward below the campus and pound up Jingshan Road to a sign pointing toward the Jingshan Nature Area. (Go left here, but veer right at the Y-intersection just ahead.)

This road runs in back of the park’s highest peak, Qixingshan (“Seven Star Mountain”). Slip into low gear on the downhill run to Lengshuikeng (“Cold Water Pit”), a scenic stopover flanked by steep mixed forests and a hot springs bath. Where the road splits at the visitors’  center, proceed left, and then left again at the T-intersection with Highway 2. Another couple of kilometers up is Xiaoyoukeng (“Little Oil Pit”), a recreation area famous for its belching geysers. A five-minute hike from the parking lot takes you past the fumaroles and leads to a lookout over a tower of sulfuric steam.

Back on the bike, steer left onto Balaka Road, which will take you through some of the park’s most breathtaking scenery. Just be prepared for a change in temperature: from 800 meters above sea level, Balaka drops downhill so fast that that the air warms up in sudden waves. At the bottom, turn left onto National Highway 101 and follow the freeway into Danshui, a congested but popular seaside town. (For your return to Taipei, consider the following route in reverse.)

Of the 220-odd kilometers of official bike trails along the rivers of Taipei, this one stands out for its convenience, length, and variety of sights. Tracing the floodwalls of the Danshui River, the flat, paved path runs from the hilly Bitan recreation area in the Xindian district north to Danshui. Weekends bring out a cross-section of two-wheeling Taipeiers, from kids on training wheels to guys suited up in the latest biking gear blasting tunes from handlebar-mounted speakers. Follow them when in doubt about how to stay on segments of the trail that double as roads or footpaths.

Xindian Station, some 15 kilometers southwest of downtown Taipei, is the final stop on a suburban MRT line that allows bikes on weekends before 4 p.m. From nearby Bitan, cycle north along the river as it shifts from deep pools to mangrove swamps. The path snakes between baseball fields before dipping into thick groves of trees. Several floodgate exits lead into Taipei’s historic districts. Minsheng West Road at Dadaocheng, for example, connects to Dihua Street, an old row of shops selling tea, snacks, and herbs. The trail finally ends just below Danshui’s bustling seaside promenade, where seafood stalls do a brisk business. To ride the rails back into town, take the MRT from Hongshulin Station.

Giant waves from the Pacific Ocean square off against steep cliffs and fishing hamlets along Taiwan’s north coast. On a clear day, the views from the highway include Heping Island, a sharp rock off the port town of Keelung City. Despite a few fast-haul buses, this route follows a relatively quiet stretch of road.

Keelung, alas, has no bike rentals, so unless you have a folding bike or one that can be easily disassembled and bagged for transport by bus, train, or taxi, you’re looking at a 25-kilometer ride from Taipei. However you arrive, from central Keelung, get on Zhongshan 1st Road near Keelung Station and head northwest past the city’s signature betel nut stalls and port facilities. Divert to the coast at Huhai Road—a bike path runs alongside it—and follow the pavement to a little known white-sand swimming beach. Ahead, the road snakes up to National Highway 2; join the freeway and turn right onto a comfortable shoulder that leads to the town of Wanli, about two kilometers away.

Beyond Wanli, a branch of the highway hugs the coast, passing rocky tidal pools, another beach, and rustic fishing boat piers. One of Taiwan’s leading tourist attractions, Yehliu Geopark, is just up ahead. This 1.7-kilometer-long spit of land is dominated by more than 100 eroded limestone knobs that look like giant mushrooms; the most famous is said to resemble a queen’s head. Just be sure to arrive before the midday crowds descend. There’s an area to lock your bike just outside the park gates.

Luodong, a flat agricultural township of about 80,000 people, is the starting point for this scenic three-hour round trip. The route zigzags through flooded rice fields to the mountain-rimmed port town of Suao (pronounced soo-wow) on Taiwan’s northeast coast.

Direct buses from Taipei’s main station run several times an hour to Luodong, 75 minutes away. Conveniently, there’s a Giant bike-rental shop just across from the final bus stop. Grab your wheels and take Zhongshan Road east under a freeway and over a red bridge, then follow Licheng Road through the farm-dominated edge of town. After eight kilometers or so, the road passes through a tunnel before continuing on through green hills to Suao. Scan the roadsides for one-room temples elaborately decorated in honor of local “land gods,” an offshoot of Taoism.

As you enter Suao, look for navy ships in the harbor; like Keelung, Suao is home to a naval base. Farther south in the more traditional part of town, fishing boats and seafood markets (a good place to refuel) crowd the wharves of Nanfangao Port. Also worth visiting in the area is the Suao Cold Spring, whose waters burble up warm—but not scalding—from the ground, a rarity in a country better known for its hot springs.

On the ride back into Luodong, stop at the red bridge and walk your bike down a short stairwell to a riverside park. Go right (west) on the quiet bike trail, breezing past lush riparian scenery in the lap of quiet farms and mountains just beyond. Exit the trail system by taking a right over the river just after the freeway overpass. Follow this calm and lightly trafficked road, named Qiedong, through a maze of rice paddies and traditional farmhouses back into town. 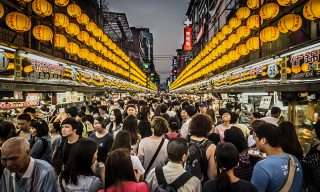 6 Unique Adventures to Embark on in Tasmania

Here are some things you didn’t know you could do in the vast and wild Australian island, from mid...