A once inhospitable island in the Gulf has been transformed into a thriving wildlife park, with plenty of room for animals and adventurous visitors alike

It seems like the kind of improbable vision that could only arise in the desert heat: an island teeming with greenery and exotic fauna, in one of the most parched regions on earth. A refuge where predators occasionally roam freely. A place with environmental credentials that also encourages indulgence. But after a three-hour drive through the flinty, unforgiving landscape west of Abu Dhabi, as our boat sluices through the sapphire-blue waters of the Persian Gulf, the mangrove-fringed shores of Sir Bani Yas draw closer, too verdant to be a mirage.

One of the largest natural islands in the United Arab Emirates, Sir Bani Yas lies just nine kilometers from the coast and is a popular getaway for inhabitants of the capital. But as much as it epitomizes the country’s heady aspirations and ability to coax beauty out of sometimes harsh surroundings, it is also emblematic of the UAE’s constant struggle with nature.

Today, though, for my 10-year-old son Kieran and the excited Emirati couples accompanying us on the brief voyage, the island is a place of promise. A forest of palms prompts a collective intake of breath. Fingers gesture at a towering wind turbine, a fairly rare sight in an oil-rich land; all eyes are peeled for a glimpse of the fabled wildlife. Alas, the search is fruitless, and until we pull up to the dock, we have to content ourselves with the animals frolicking in an endless loop on the cabin’s flat-screen television.

But there’s no need to worry: one of the first things we learn after setting foot on Sir Bani Yas is that it is harder to avoid animals than to spot them. Rattling down a dirt track toward Al Sahel Villa Resort—one of three properties on the island operated by Bangkok-based hotel group Anantara, the sole accommodation provider—our jeep rouses dozens of delicate, white-breasted gazelles apparently dozing on the road ahead. They rear up and race ahead of the vehicle like uncoiled springs. Having evidently done his homework, Kieran informs me these are sand gazelles, by far the island’s biggest animal demographic. Characterized by their spiraling black horns, slender frames, and powerful hind legs, they can run up to 60 kilometers per hour, meaning our driver, Ajit, barely has to apply the brakes. Along with the Arabian oryx, which was declared extinct in the wild in the 1970s, they were the reason the late ruler Sheikh Zayed bin Sultan Al Nahyan established a wildlife breeding and protection program on Sir Bani Yas four decades ago.

The island’s connection to royalty—and to Sheikh Zayed’s efforts to “green” the vast desert that covers most of the UAE—remains strong. Ajit points out a vast tract of land that is still part of a (off-limits) royal estate, home to dense lemon and orange groves. Small, stubborn trees—acacia, ghaf, frankincense—are planted everywhere in neat rows, watered by a snaking network of plastic tubes that help them take root in what’s essentially a massive dome of salt. In places they even ascend the barren mountains that are the island’s defining geological feature, painting broad blotches of emerald on an almost lunar surface. And in the shade of almost every branch lies a gazelle, seeking respite from the midday sun.

Anantara’s main resort on Sir Bani Yas, Desert Islands, was once a royal guesthouse. But our destination is Al Sahel, a newer enclave of private villas whose baked-sand walls and thatched roofs give them a rustic air that suits the savanna-like surroundings. They also incorporate plenty of luxurious touches, including spacious rear terraces with plunge pools, where it’s possible to soak and gaze out on uninterrupted stretches of grassland, mountains hovering in the distance. A low-key, Africa-meets-Arabia theme runs throughout the resort, with interiors done up in earth tones, wooden furniture, and tribal curios. 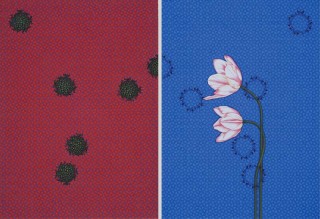 The Pakistani artist covers canvases with precise shapes and details for "Divine Is In The Detail." 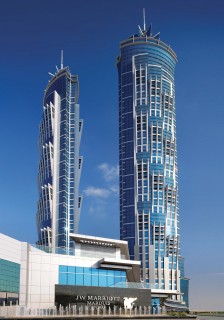 Things are looking up with the opening of the world’s tallest hotel, the JW Marriott Marquis Dubai... 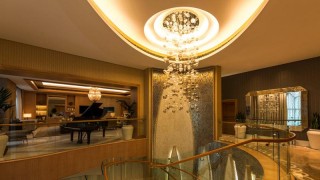 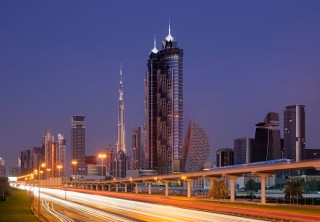 At 355 meters, the hotel is just 26 meters shy of the Empire State Building. 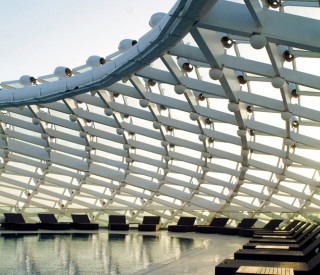 With its second F1 Grand Prix and a slew of new attractions on the horizon, Abu Dhabi is living life...