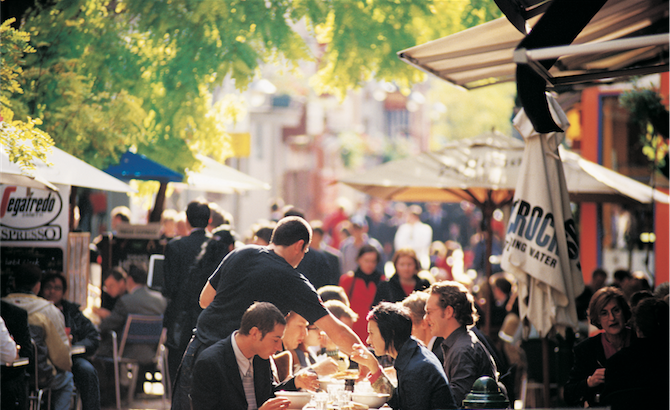 Above: A typical dining scene in Melbourne, this one on Hardware Lane.

Why has Melbourne become such a mecca of great restaurants? We were there this month for the 20th Melbourne Food & Wine Festival. As we chatted with Michelin-star chefs and had one great meal after another, the question kept popping into our minds.

We asked it to a variety of folks, and a consensus emerged: A number of factors, not just one, explains the phenomenon. Here is a quick rundown of the factors most often cited to us at various bars, restaurants, and cocktail parties last week:

** Melbourne was blessed early on with influential immigrants from countries with rich culinary traditions, especially Italy and Greece, but also Lebanon and others. In their restaurants in Melbourne these immigrants used local ingredients but stuck with time-tested traditions. City residents learned to expect the best that such traditions had to offer.

** The central business district was intentionally designed to be compact and easy to get around in. Combine that with the city’s great public transportation options and it’s incredibly conducive to meeting up with friends and eating out — even if it’s raining. This provides fertile ground for restaurants to thrive in.

It also means that restaurants, if they wish to survive, better be damn good. Diners have plenty of other options nearby if an establishment proves unworthy. This is true to some extent in any city of course, but it’s a particularly strong factor in Melbourne. It’s almost ridiculous how many great eats can be found within a 10-minute walk.

** The government has made it simple for businesses in the city center to acquire a liquor license. As a result the city’s small pedestrian-only lanes and arcades are even more fun and lively, chock full of food-serving bars and alcohol-serving restaurants. This provides more encouragement, as if more were needed, to eat out. (Many in Sydney now want their own city to follow suit.)

** The availability of excellent markets like Prahran Market and Queen Victoria Market within the city make it easy for chefs to acquire fresh ingredients from the surrounding countryside, which is rich in quality meats, dairy, and produce. Chefs visiting the city for the festival were quick to point out this factor.

The festival, like the city itself, is a magnet attracting the best chefs from around the world. Besides an Anthony Bourdain spotting in a hotel lobby, we met Michelin-starred chefs like Serge Vieira and Jacques Marcon, both of whom were particularly enthusiastic about the local markets. (They teamed up for a memorable dinner using local ingredients at a “Stars of Stars 2012” dinner at JJ’s Bar and Grill at Crown Towers hotel on Thursday night.)

There are more reasons, of course, behind Melbourne’s thriving restaurant scene and increasing stature in the culinary world, but the above cropped up most often last week.

Want to read more on Melbourne’s dining scene? DestinAsian toured some of the city’s best restaurants in this article, and some of its quirkiest (just for kicks) in this one.

Learn more about the Melbourne Food and Wine Festival at its home page and abundant events listings.