A view of the rides from the waters.

Located in Costa Dorada, this entertainment resort is one of the biggest establishments in Europe. Portaventura has six hotels as well as an amazing array of unique rides and entertainment. The rides in the park are divided into six different categories, each with a different theme: Mediterranean, China, Polynesia, Mexico, Far West, and the beloved Sesame Street. Recently, the theme park expanded its wings and opened FerrariLand, featuring Ferarri-themed restaurants, theatres, and a hotel.

Port of Discovery in Disney Sea.

Disney added another milestone to its storied history in 2001 by opening Disney Sea in Tokyo, which delighted young fans all over Asia. It’s now one of the main reasons that tourists flock to Japan.

In comparison to Disneyland, Disney Sea is filled with rides that are more suitable for adults. Its divided into seven different theme parks: there’s Port Discovery, Mediterranean Harbor, American Waterfront, Lost River Delta, Arabian Coast, Mermaid Lagoon, and Mysterious Island. If you’re looking beyond just the rides, unique Disney-themed Japanese delicacies and souvenirs are sold throughout the park, making the experience of simply walking around an entertaining (and filling) one. The fire-breathing dragon in the Wizarding World of Harry Potter.

A visit here will always be just a little bit more than amazing. From the moment you step into the park, you’ll be greeted by Harry Potter, a fire-breathing dragon, and Despicable Me’s adorable yellow minions. Jump on their thrilling rides, or simply stroll around and have a taste of the park’s famous massive turkey leg. For those who dream of getting into the Hogwarts School of Witches and Wizardry, you can head over to the park’s Wizarding World of Harry Potter, where you’ll find a plethora of activities to choose from.

Founded in 1991, this movie-themed attraction is the only one of its kind in Australia. Known as “Hollywood on Gold Coast,” visitors in the park can find themselves walking next to Marilyn Monroe, dancing with Austin Powers, or having a photo-op with Batman. They can also expect to see a colorful parade showing all the famous characters on top of themed floats. Aside from their exciting rides and adrenaline pumping roller coasters, there’s also a river where guests can take lazy boat rides. 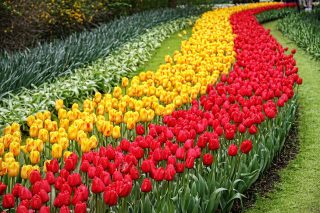 Flower enthusiasts will want to watch the latest video tours from the world-famous Keukenhof gardens...