Next time you find yourself in a window seat on approach to Copenhagen Airport, keep an eye out for Europe’s latest architectural showpiece on the shore of the Øresund Strait in the southern suburb of Kastrup. From above, Blue Planet , which was designed by Danish architect 3XN, mimics the swirling shape of a whirlpool. It is the largest aquarium in Northern Europe. Visitors enter the aquarium through the largest of the spiral arms where, from reception, they have a choice of multiple routes, taking in rivers, lakes, and oceans inhabited by some 20,000 fish and other forms of marine life from all over the world. Each exhibition has a theme of its own with visual displays and audio tracks employed to make Blue Planet a more immersive experience. Exhibitions will be updated frequently—the aquarium has a tie-up with London’s Natural History Museum and hosts a research center in partnership with two of Denmark’s top universities. The Blue Planet replaces Denmark’s Aquarium in Charlottenlund, which was closed recently after 73 years as one of the country’s top tourist attractions. 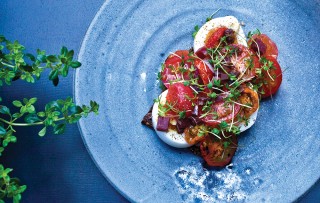 In Copenhagen, a Sandwich Revisited

In Copenhagen, a Sandwich Revisited

Smørrebrød, Denmark’s traditional open-faced sandwich, has been reinvented for the 21st century ...