Ever since the original Orient Express left its Paris sidings for the first time in 1883, the train has carried everyone from rogues to royalty across the continent, while paying witness to much of modern European history and inspiring a clutch of 20th-century writers—Graham Greene and Ian Fleming among them. After reaching the peak of its popularity immediately after the First World War, the commercial reality of modern rail travel meant the operation threatened to run out of steam in 1977, before a businessman and admirer of the train stepped in and acquired two carriages from a Sotheby’s auction lot in Monaco.  A total of US$16 million was spent on refitting the Art Deco carriages and, in May, 1982, the train returned to service with a run from London to Venice. Now, the successor to the original locomotive—the Venice Simplon-Orient-Express—has built on the existing heritage with a new destination. The train departs from Venice today, weaving through Italy, Austria, and Germany before arriving in Copenhagen, where it will stop overnight. The following morning, the train continues on, arriving in Stockholm on Thursday, by which time it will have covered more than 2,500 kilometers. To prepare for the new port of call, VSOE’s head barman has prepared a Lovisa cocktail—a vodka-based drink complemented by Arctic brambles, cinnamon, and a liquor derived from cloudberries—and a Kir Nobel, which adds cherries and lingonberries to Champagne. 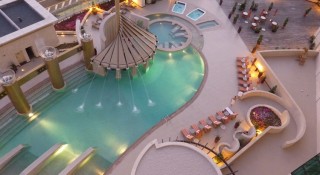 A New Generation of Èclairs in Paris