Go beyond seeing the Big Ben by paying a visit to these watering holes.

Playing up one’s raunchy past has become the new norm for establishments. This is what members-only bar Disrepute (or D.R.P. for cool people) is doing, which stands in what used to be the Kingly Club and Pinstripe Club. Hollywood’s biggest names, from Marilyn Monroe to Audrey Hepburn, used to be its patrons (at least in its previous lives). It also served as the rendezvous spot for John Profumo and a teenage model, with their affair eventually leading to his resignation as Secretary of State for War in the 1960s.

Founded by the owners of Sovereign Loss and Barrio, D.R.P. opened in December last year, introducing a cocktail list with names such as The Mateus Rosé and Babycham. The description for each drink sounds a tad too cheesy if not confusing, so you might as well as ask the bartender if you end up befuddled.

Non-members who want to drop by at this Soho joint and see what the fuss is all about are advised to make a reservation, or else end up sitting at a corner with a less-than-ideal view of the bar. And while one journalist has remarked that its drinks are so-so, its turquoise couches, marble floors, and brass accents make it worth the visit.

Just a stone’s throw away from tourist spots Kensington Palace and the Royal Albert Hall, the Hyde Bar’s interiors are similar to that of posh 19th century townhouses, with period furniture and art pieces to boot. Located inside the Royal Park Hotel in Paddington, the almost six-months-old joint also serves afternoon tea. Take your pick: signature English breakfast teas grown in an independent farm in the mountains of Malawi, hand-crafted longjing teas, or their signature lemon curd.

London’s chilly weather might deserve something stronger, so try one of their spirits, each of which are listed on their comprehensive menu complete with origin and ingredients. Critics’ favorite is Air Mail with golden rum, lime, and honey, but you have a ton of other options, too. Pair your choice with chili tiger prawn katsu or sesame crusted yellowfin tuna and your dining experience is complete.

It’s pretty amusing that a place where you can get roaring drunk used to be a magistrate’s court. Jailhouse is exactly that. After officially opening on April Fool’s Day this year, the five-star Court House Hotel’s bar has become regarded as one of the best places to eat in East London. And it’s no wonder—it successfully turned the Shoreditch-located building’s old prisons into clever spaces, with their brick walls, leather-padded booths, wood paneling, and warm lighting.

A post shared by Courthouse Hotel Shoreditch (@courthousehotelshoreditch) on Mar 8, 2017 at 7:35am PST

Menu-wise, one standout is Ball and Chain, composed of gin, Cointreau, lemon juice, and orange marmalade served with a shot of prosecco. Another is Liquid Cosh, a combination of whiskey, Grand Marnier, apple juice, fresh kumquats, and apricot jam. With its conversation-worthy interiors and whimsical drinks, Jailhouse is one place you’d love to get imprisoned in.

A post shared by Courthouse Hotel Shoreditch (@courthousehotelshoreditch) on Feb 15, 2017 at 3:03am PST 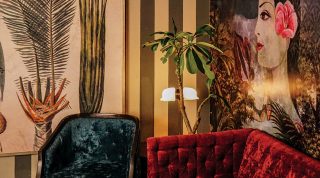 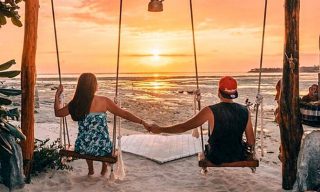 3 Spots in Nusa Ceningan for Sunset and Cocktails

Nusa Ceningan, a small island south of Bali, is revving up the dining scene on the Straits of Badung...