With its foliage-filled lobby, pared-back guest rooms, and sky-high views of the Japanese capital, The Tokyo EDITION, Toranomon is the coolest addition to the city’s hotel scene in years, a cutting-edge property that pays tribute to Tokyo’s rich past while keeping one foot squarely planted in the future.

Housed in the upper floors of a 38-story skyscraper in the Toranomon business district, the EDITION brand’s first foray in Japan (a sister property is slated to open soon in the nearby Ginza district) marks an unprecedented partnership between visionary American hotelier Ian Schrager and globally renowned architect Kengo Kuma.

The lobby alone is a knockout: a soaring space packed with a jungle-like burst of plants (more than 500 in all, including lush palms and cherry laurels) that draws its inspiration from the central courtyard of a Buddhist temple. It’s conceived as a modern gathering place that encourages communal and social interaction in all of their forms. Radiating out from the lobby are several eating, drinking, and entertainment areas that have their own distinct character.

These include The Blue Room, a convivial all-day restaurant whose chic decor is matched by modern takes on classic international dishes such as herb-breaded lamb rack and duck confit; the white-marble Lobby Bar for afternoon tea and Japanese accented craft cocktails; and the soon to-open Jade Room and Garden Terrace, where Michelin-starred British chef Tom Aikens will oversee a bespoke menu centered on century-old cooking methods and seasonal flavors. The latter will also feature a first-of-its-kind outdoor dining terrace overlooking the red-and-white Tokyo Tower.

Another first for the city are the handful of guest rooms that feature step-out terraces of their own—a rare luxury in Tokyo. But the rest of the 206 rooms are no less beguiling, outfitted in minimalist style with light oak floors, faux fur bed throws, down comforters, and a single gold-leaf painting; suites offer the additional luxury of freestanding oval bathtubs. Spanning the building’s 31st to 36th levels, all rooms share dazzling views across the skyline, with some overlooking Tokyo Bay. 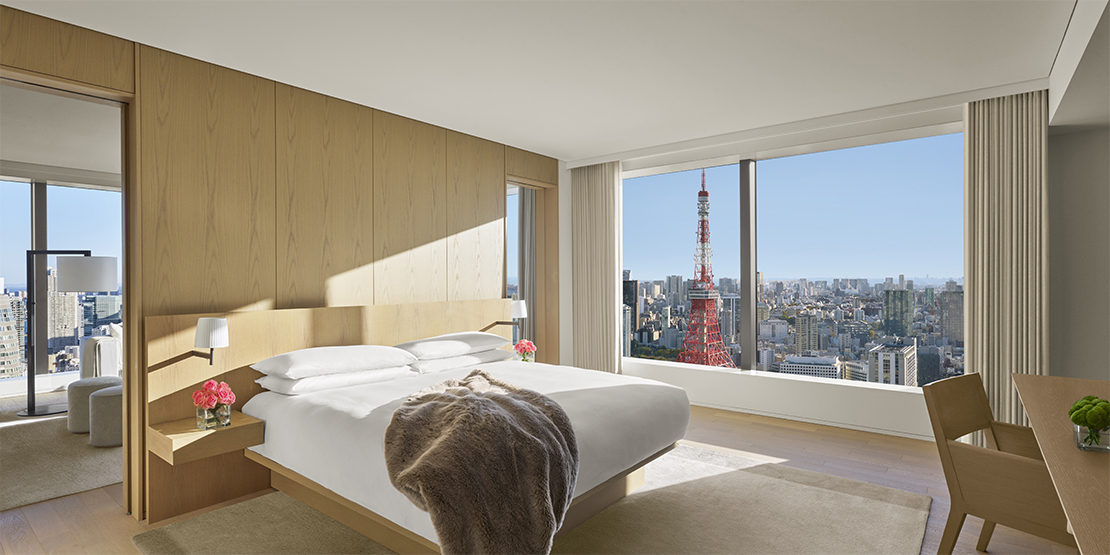 When it comes time to step out, guests are just a short taxi ride away from numerous city attractions. Among them is Shiba Park, one of the oldest public parks in Japan and home to several ancient trees; the hilltop shrine of Atago Jinja; and the Suntory Museum of Art, a striking ceramic louver–clad building (also designed by Kengo Kuma) that showcases an extensive collection of Japanese arts and crafts.