Picturesque San Miguel de Allende has attracted a steady stream of tourists for decades, and expats since long before that. But the charm of its well-preserved town center prevails, as a recent visit—by way of Dallas—reveals

Cooking classes aren’t exactly my thing, but here, on a crisp, overcast October day in the highlands of central Mexico, sipping a mug of Palma’s homemade hot chocolate (his mother’s recipe, cooked in a clay pot) as the chef affably discusses the finer points of Mexican cuisine, I can’t think of a better way to while away a morning.

It helps that I’m staying at the Rosewood in San Miguel de Allende. While the hotel is a relative newcomer to this 16th-century colonial city—it opened in 2011—you’d be forgiven for mistaking it, at least at first glance, for something much older. Designed like the casa grande of a colonial-era hacienda, it features stuccoed walls in hues of salmon and tangerine, arched porticos and columns of pearly gray limestone, trickling courtyard fountains and lush gardens, repujado (pressed tin) door panels, timber-beamed ceilings, and hand-wrought ironwork. With 67 rooms spread over some three hectares, it’s the biggest lodging in town, though it still feels more like an ultra- lavish boutique hotel—albeit one equipped with an art gallery, a well-stocked subterranean wine cellar-cum-private dining room, a cabana-lined swimming pool, and a rooftop bar that serves up fruit-infused margaritas and stirring nighttime views across the roofs, domes, and spires of the Centro Histórico.

Roaming aimlessly through the narrow, cobbled streets of San Miguel’s historic center becomes one of my chief pleasures during my time here. But so too does returning to the Rosewood, and not just because of my handsome suite. The guest experience here is admirably rooted in local culture and cuisine, from tequilier-led tequila tastings (more on that later) and the superlative food at farm-to-table restaurant 1826 to the spa’s signature “mole” scrub of ground coffee and cacao. And then there’s my cooking class, which begins with a jaunt to a hacienda in nearby Jalpa for a look at the organic farm where Rosewood grows its own produce, and ends with me devouring a trio of sopes topped alternately with chicken mole, huitaloche, and refried beans with fresh panela cheese, all prepared from scratch.

“This food is ancient, pre-Hispanic, going back to the Aztecs or earlier,” Palma says as he begins to clear up the mess we’ve made. “These flavors are the essence of Mexico.”

And that really is food for thought. 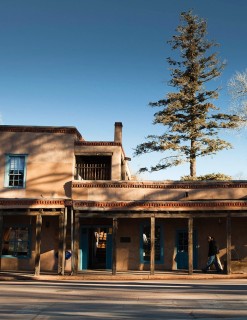