I’m still asleep when the boat departs Bagan the next morning, but the fields of temples and pagodas stay with us until well after lunch. As the river widens, a variety of traffic joins us on the water: colorful ferries, high-sterned wooden boats known as hnaws, barges laden with teak logs and ceramics, and small bamboo rafts, some of which spend more than a month drifting down the Irrawaddy before delivering their cargo. A lifesaver on the newly refitted ship.

In the past, the river saw vastly different types of traffic. The banks of the Irrawaddy have been home to all of Burma’s ancient capitals—Sri Ksetra, Bagan, Inwa, Amarapura, and Mandalay (Yangon, née Rangoon, the seat of British Burma and until recently, the post-independence capital, is linked to the Irrawaddy by canal). Records show that as early as the Bagan Empire (849–1287), the waterway was the favored playground of Burmese royals; King Alaung Sithu was renowned for cruising the river on his elaborate golden barge, reputedly building pagodas and temples wherever he came ashore.

Fast-forward to the mid-19th century when the ruling British, recognizing the river’s strategic and commercial potential, introduced a service of steel-hulled paddle steamers under the Scottish-owned Irrawaddy Flotilla Company (IFC). By 1930, the company had become the biggest river-transport enterprise in the world, with more than 650 steamers and barges moving Myanmar’s teak, cotton, rice, and oil into China and beyond. These are the craft that Rudyard Kipling wrote about in the poem to which our cruiser owes its name: “Can’t you ’ear their paddles chunkin’ from Rangoon to Mandalay?… Where the flyin’ fishes play, an’ the dawn comes up like thunder outer China ’crost the Bay!”

Most of the IFC’s fleet was scuttled in 1942 on the eve of the Japanese invasion of Mandalay; John Morton, the company’s manager at the time, recorded in his diary that he personally “drilled holes in their bottoms” with a Bren gun. It’s thought that more than 100 IFC ships still lie on the murky bottom of the Irrawaddy. Those that survived became the property of the Inland Water Transport Corporation with Burmese independence in 1948. As we head north on the river today, some of these old vessels pass us, moving people and cargo around the country at a leisurely pace.

Books belonging to the onboard astrologer.

When not spent boat spotting, the hours onboard the Road to Mandalay are broken with lectures and cultural programs—everything from Burmese cooking demonstrations to puppetry and astrology readings—and long lunches. As the only single person on the ship, I find myself being passed among the different groups of passengers come mealtime. I meet doctors and lawyers and NGO workers from all over the world—the only apparent commonalities being that everyone is relatively mature (only a few of us are under 50), well-traveled, and fond of a drink.

I make friends with Mike and Gretchen, husband-and-wife neurosurgeons from the U.S., over chilled Myanmar Beers—at 10 a.m. (In their late forties, they become known among the crew as “the Young Ones.”) Having visited Myanmar five times since the mid-1970s, Mike tells me that very little has changed. “I’m still just as fascinated by Burma as when I first visited,” he says.

Three beers later, I decide that it’s time to join Deidre, a seventysomething Australian, for a late lunch. “This will probably be the last time that I ever travel,” she tells me over grilled river fish, prawns, and fabulous dhouq—salads made with raw vegetables tossed with lime juice, onions, peanuts, chili, and other spices. “I’ve wanted to do this boat ride since I first heard about it 10 years ago. This is the trip of a lifetime for me.” She also confides that her family tried to talk her out of the holiday. “I didn’t feel scared, but my friends asked why I would come here … Wouldn’t I be supporting the regime?”

One of the Road to Mandalay’s refurbished state rooms.

At US$2,200 per person for three nights, the Road to Mandalay cruise is not something you book on a whim, and there’s no escaping the fact that a percentage of your fare will eventually line the generals’ pockets. Still, Orient-Express seems to be doing what it can to be a good corporate citizen. It engages local, private suppliers wherever possible. And in the wake of Cyclone Nargis, while the junta was blocking international relief efforts, the company raised funds for aid projects on the ground. One of these involved dispatching the Road to Mandalay’s doctor to manage medical clinics in the Irrawaddy Delta.

“I don’t believe you can help or make an impact from your sofa,” says Deidre, who brought books, stationery, and toiletries with her to hand out to children whenever we dock. Like many of my fellow passengers, she also makes a donation to the various community projects of Orient-Express, which range from building schools to providing food and supplies to orphanages and monasteries across the country.

Day three on the river sees the appearance of dozens of small fishing villages: teak-and-bamboo huts set beside magnificent white and gold stupas, erected as much for religious purposes as to serve as shore landmarks for river craft. Constant erosion has transformed these waters into silted, murky torrents, broken by huge sandbanks that oblige the Road to Mandalay to use sonar to avoid running aground. Many other craft are not so well equipped—we see a number of boats abandoned on hidden shoals.

The scenery changes as we pass Inwa and Amarapura, both of which served as royal capitals after the fall of Bagan in 1287. With the sparse plains now behind us, rolling mountains appear to the east and west, lined with teak, Andaman redwood, and dozens of species of wild orchids. If we were to travel farther north still, we’d pass through dramatic gorges and see wild jungle and thick teak forest enveloping the riverbank. It’s an ecosystem we won’t experience on this cruise, but it’s increasingly accessible thanks to the Road to Mandalay’s newest route from Bagan to Bhamo, a market town near the Chinese border. The 11-night journey is only possible when the river is at its highest in August and September, swollen with monsoon rains that can see water levels rise up to 15 meters.

In October, however, the cruise ends on a wide bend of the Irrawaddy in Mandalay. This was Burma’s last royal capital, surrendering to the British in 1885. The Road to Mandalay docks just north of the Ava and Sagaing bridges in the hamlet of Shwe Kyet Yet, where we’re greeted by the nonchalant gaze of locals puffing on cheroots made with woodchips and tamarind wrapped in maize husk and teak leaves. From the riverbank, Mandalay lacks the dreamy allure that many would-be visitors (including Kipling, who never actually set foot in the city) imagine it to have. Despite conjuring up images of a peaceful and serene setting, the country’s second-largest city is scruffy and uninspiring, with large modern buildings erected by its sizable Chinese population. “It’s still a dump,” says Mike, recalling his trip here 20 years ago. The romance of the region only becomes evident on our final day when we disembark and make our way to the top of Sagaing Hill by bus.

Sagaing is hard not to fall in love with. On the opposite bank of the river from Mandalay, it is topped by a sublime golden stupa. There at the top, the view of the surrounding hills, studded with more than 600 pagodas and 100 meditation centers as well as countless monasteries and nunneries, is stunning. Like everything else in Myanmar, the sun takes its time setting, its last rays finally catching the hundreds of gilded rooftops that light up in unison, casting a surreal golden glow over the hills and the Irrawaddy and the Road to Mandalay in the distance. 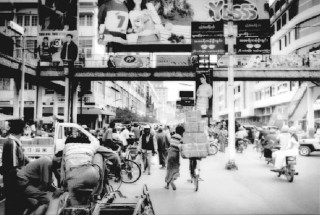 Myanmar Travel: On the Road to Mandalay

In a land that has become a byword for brutal repression, magic is still to be found amid the depriv... 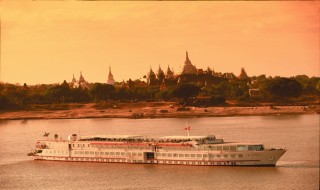 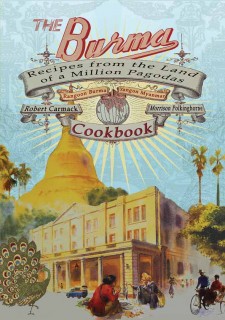