Bundi’s Garh Palace dominates the town from its hillside fastness.

Deep in the heart of Rajasthan, the timeless appeal of Bundi’s royal frescoes has inspired the creation of an annual art festival.

The countryside framed by the car windows is unexpectedly lush for the desert state of Rajasthan: green carpets of groundnut and corn, guava and pomegranate orchards, emerald paddy fields worked by farmers in vo­luminous turbans. Even more surprising is the mirage-like appearance of Bundi, our day’s des­tination. Hemmed in by the Aravalli Hills and overlooked by the crumbling battlements of a medieval fort, the town is a sea of bright blue houses that laps against the hillside ramparts of Garh Palace, a fantastical complex of bastions and cupola-topped mahals (palaces) that seems to grow straight out of the rocks. “An avalanche of masonry” is how Rudyard Kipling described it after an 1887 visit. “No one knows where the hill begins and where the Palace ends.” A local artist on Bundi’s main street proudly brandishing a foreign book cover he was commissioned to design.

I am here with members of Chitrashala, a weeklong artists’ residency held at the Lake Nahargarh Palace hotel near Chittorgarh, some 150 kilometers to the southwest. The event’s organizers—Bangalore-based fashion designer Deepika Govind and her hotelier husband Ash­ish Vohra—have invited more than 40 Indian and international artists with the aim of fuel­ing creative dialogue while introducing them to the artistic and architectural heritage of the area. Now in its second year, Chitrashala takes its name from the “hall of paintings” inside Garh Palace, a gallery whose walls and ceilings are frescoed with intricate miniatures from the 17th and 18th centuries. These are, we’re told, among the finest examples of Rajput painting, and well worth the two-hour drive to see.

Our guide, Keshav Bhati, seems almost as old as the palace itself, but he climbs the steep path to its entrance like a mountain goat. As we huff and puff our way up the hillside, he explains that Bundi came into importance in 1342 as the capital of the princely state of Hadoti and grew wealthy under its Rajput rulers, particularly after a 16th-century alliance with the Mughal Empire. Today the town has faded into relative obscurity and remains off the path of most tourists; I don’t spot a single tour group or even backpacker. But the lack of visitors also has a downside.

Beyond its monumental gateway, we find the palace complex in a state of neglect. Pigeons roost in guano-streaked niches, and the smell of bats follows us as we walk past old halls and pavilions overgrown with weeds and marred by graffiti. Thankfully, the Chitrashala is in much better shape. A mural detail in the Chitrashala depicting Rajput warriors during an audience with their raja.

Bundi’s tradition of miniature paintings be­gan in 1605 when three master painters from Chunar, near Varanasi, were sent here as a gift from the Mughal Emperor Akbar. These artists, who had previously worked only on palm-leaf manuscripts, began painting on walls, using a brush attached with a single hair to create mi­croscopic lines and produce a three-dimensional effect. Miniature painting would flourish across Rajasthan in the centuries to come, but nowhere more so than in Bundi, perhaps in part because of the town’s picturesque setting.

At the Chitrashala, which comprises several rooms on an elevated podium around a mani­cured garden courtyard, every inch is adorned with delicate details—scenes of dancing girls and marching soldiers, portraits of kings and royalty, grand processions, polo matches, local festivals, and Hindu deities in a soothing palette of aqua, turquoise, and sea green. “The paint­ers used malachite and lapis lazuli to get those shades,” Bhati explains. He points out the cos­mic dance of Krishna known as the Ras Leela and a frieze depicting the goddess Annapurna on an elephant offering food to Shiva, who rides the bull Nandi with his family. The painters were masters of their brush strokes and the chiar­oscuro of light and shade, with complex and intense emotions portrayed in every scene. Even though many of the frescoes are peeling or black with age, they still take my breath away.

Back at Lake Nahargarh Palace, I meet several painters to gauge the progress of their work. Jor­danian feminist Juman Alnemri uses puppets as a metaphor to express the plight of women. Her artwork, executed in shades of purple and blue, features two Rajasthani puppets. Meanwhile, In­dian painter Partho Chatterjee has depicted the hotel itself on a moonlit night, against a distinc­tive background of scribbles and lines. Most of the artists I speak to have been influenced by the rich color palette of the Bundi paintings. Overlooking Bundi’s distinctively colored houses from the walls of the Garh Palace.

“For centuries, Bundi has inspired great painters, artists, and authors. From Rabindra­nath Tagore to Kipling, down the ages, Bundi has been a muse to them all,” explains co-organizer Vohra. “The intercultural dialogue we are now seeing between artists from different countries, as well as Indian artists placed in a different mi­lieu, has proved that art has no borders.” Govind, his wife, reminds me of their festival’s nod to the patterns of history. “This influence goes back centuries, to the Chinese and Mongolian artists who interpreted what they saw around them on the walls of the Chitrashala.”

This article originally appeared in the December 2016/January 2017 print issue of DestinAsian magazine (“Off the Wall”). Next Stop: The Appeal of Amritsar

With major festivities at Diwali, plenty of historical charm, and a reputation for excellent cuisine... 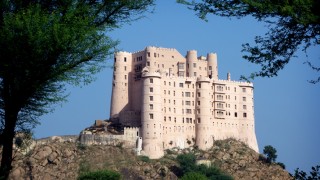 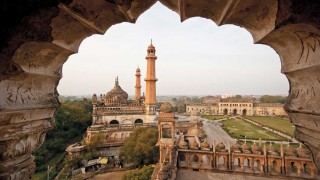