Steeped in history and filled with colonial European architecture, the northern Chinese port city is looking to rise again

The first surprise about Tianjin is how quick the journey is from my home in Beijing: just 33 minutes by high-speed train, barely enough time to check my e-mails and flip through a magazine. I’ve had haircuts that lasted longer. The second surprise is how tranquil it is. That’s not a word often used to describe Chinese cities. Granted, Tianjin’s population is only half that of Beijing’s, but that still adds up to 10 million people—an easy fact to forget when you’re exploring the historic Heping District on a weekend.

It’s on just such an amble that I’m struck by the former treaty port’s most compelling surprise: street after street lined with some of the finest examples of colonial architecture in China outside of Shanghai. These range from European-style villas, resplendent with soaring columns and porticos, to mock-Tudor bungalows and the humble row houses that cluster about Wu Da Dao (“Five Big Avenues”), a leafy neighborhood in Tianjin’s former British Concession area. And along Jiefang Bei Road near the Hai River stand imposing Neoclassical buildings that once housed banks run by the Japanese, Germans, Russians, and British.

Imagine the Bund in Shanghai, but without the crowds and hardly any foreign faces. That thought keeps running through my head as my husband and I walk down Jiefang Bei Road, where a group of men gathered outside a grand old bank are so startled to see us that one quickly fumbles for a cigarette to offer my husband—a gesture of hospitality. Later on, after failing to coax us into her pedicab, a trishaw driver praises my husband’s efforts at Mandarin. “You speak very well—I had no problem understanding you!” she shouts encouragingly. Her counterpart in Beijing would not have been so gracious.

Proximity to the capital, a laid-back atmosphere, architectural treasures, reams of history, friendly locals: Tianjin has much to commend it. Yet despite these advantages, it has long been the redheaded step-child of Chinese cities. Tourists, if they do visit, treat it as a day trip from Beijing, while big-city folk are inclined to sneer at it. “Tianjin is China’s answer to Philadelphia,” says Jeremiah Jenne, an American historian who teaches at the Beijing Foreign Studies University. “It’s stuck between Beijing and Shanghai, like Philadelphia is between New York and Washington, D.C. And Tianjin faces the same dilemma: Philadelphia doesn’t have the glitz of New York or the power of D.C., but it’s huge and important.” 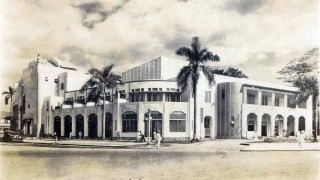