Amid the grasslands and acacia-dotted hills beyond Mount Kenya, spectacular scenery and a growing patchwork of wildlife conservancies provide the backdrop to an unsung corner of sub-Saharan Africa.

Anywhere in Africa, the rainy season is supposed to be the worst time to go on safari. The lush vegetation makes it harder to spot wildlife, and abundant water means the animals don’t congregate around water holes. But that rule doesn’t seem to hold true in Meru National Park, a vast and little-known game reserve 350 kilometers northeast of Nairobi where the early monsoon rains of April bring unexpected drama to the savanna.

A mass of gray rumbles past our Land Cruis­er: elephants, more than a hundred of them. They’re mostly females and adolescents, graz­ing on the grass and thorn trees as they move in near silence under ominous-looking thunder­clouds. Then a flash of lightning startles them into a flurry. Trunks flare and trumpets sound as the adults circle to protect the youngsters.

The rain starts in earnest as we arrive at Elsa’s Kopje, a lodge built around the granite outcrop where naturalists George and Joy Ad­amson of Born Free fame raised Elsa the lioness in the 1950s. The vervet monkeys that inhabit the camp are huddled miserably beneath trees, while some hyraxes—cute little mammals with rodent-like features—have taken refuge in my room, perched around the bathtub and on win­dow ledges as they wait for the rain to abate. And by morning it has, revealing a marvelous sunrise that bounces off the glaciers crowning nearby Mount Kenya, Africa’s second-highest mountain. Black rhinos are finding a new lease on life in Kenya.

I’ve seen a lot of Africa over the years, includ­ing the Masai Mara, but this is my first time in northern Kenya, a mosaic of wild landscapes and living things unmatched anywhere else on the continent. In British colonial days, the un­tamed territory between Mount Kenya and the Ethiopian border was known as the Northern Frontier District; today, it comprises a patch­work of counties, including the two I’m visiting: Meru and Laikipia. But if conservationist Tarn Breedveld gets his way, the entire world will come to know this region as Kenya’s Northern Rangelands.

A lanky young Australian, Breedveld is the tourism director at Northern Rangelands Trust (NRT), a nonprofit established in 2004 to foster the development of community conservancies across the top half of Kenya. There are currently 33 conservancies under the NRT umbrella, com­prising some 44,000 square kilometers of sus­tainably managed land where pastoral peoples such as the Samburu, Borana, and Tur­kana herd their prized cattle within a literal stone’s throw of lions, elephants, rhinos, and other wildlife.

Breedveld meets me at the muddy airstrip beside Elsa’s Kopje and we clamber aboard a Cessna 206 piloted by Gary Cullen, the trust’s chief executive officer. Skirting around rain clouds—and two high-flying vultures—we glide into an aerial tour of the region.

“Almost everything below and in front of us now is conservancies,” says Breedveld, pointing toward a hazy horizon that stretches off toward Lake Turkana. “The concept works because the local communities are fully engaged. Money earned from tourism gets divided between conservation efforts, operational fees, and com­munity development projects like schools, boreholes, roads, and rangers. We also help lo­cal people get more value out of their livestock through better quality animals and better access to markets.”

The end result is an astonishing record of wildlife preservation—programs that give hope that rhinos might actually survive in the wild, and that have cut elephant poaching in half since 2012. But there’s a lot more than wildlife out here; this part of the country is also a mother lode of incredible geology. There is the volcanic lake at Magado Crater, where Meru people mine for salt in the dry season. There are natural hot springs and geyser fields, and monolithic rocks ready-made for outdoor adventure. Dead ahead of our plane is Ololokwe, a massive flat-topped mountain long sacred to the Samburu and new­ly discovered by avid rock climbers and paraglid­ers. The region is home as well to the annual Rhino Charge, a charitable 4×4 rally through the rugged red-dirt wilderness.

Our flight deposits us at Lewa, one of the country’s oldest conservancies, which is world-renowned for its pioneering conservation work with the critically endangered black rhino. Since the first rhinos were relocated to the former cattle ranch in 1984, their numbers have grown from 15 to more than 60, with another 31 ani­mals moved to budding rhino programs in other sanctuaries.

“We haven’t had a rhino poached at Lewa since December 2013,” says veteran guide Tom Njogu as we head out into the grasslands in a safari jeep. “And in the years since, we have been the only Kenya reserve where no rhinos were taken.” A view across the grasslands of Lewa Conservancy to the rugged peaks of Mount Kenya.

It doesn’t take long to spot some: a large bull methodically marking his territory with strategic urination; a mother and calf lounging in the middle of a dirt road; young bachelors grazing amid zebra and antelope.

Hearing reports of a leopard, we drive into thick woodland along a watercourse, and quick­ly get stuck in a large aardvark hole. It’s nearly an hour—and almost dark—before someone arrives to pull us out. The leopard is long gone by then. But the next day, acting on another tip from conservancy rangers, we go in search of lions allegedly gathered around a kill. It takes an hour and a half, but Njogu finally spots them sitting atop an earthen dam beside an artificial water hole—six big cats licking their chops.

We find their kill nearby: a domestic camel. “It belongs to a guy who runs camel treks in Lewa,” Njogu explains. “This is what happens when livestock share the land with wildlife. The owner will most likely be compensated, yet he knows the risk involved in letting his camels graze here.” It also underscores what makes conservancies so special—the fact that nobody is going to track down and kill these lions be­cause their hunger strayed beyond wild game.

Before arriving in the region, I was told that air is the preferred means of getting from place to place. But I don’t fully appreci­ate why until the drive from Lewa to Loisaba Conservancy, in the neighboring county of Lai­kipia. Though the distance is only about 100 kilometers as the crow flies, the journey takes six hours along some of the roughest roads I’ve encountered in East Africa, the terrain gradually changing from plush savanna to arid desert-like country spangled with cacti and rocky outcrops.

Loisaba’s original tented camp burned to the ground during a wildfire in 2013. I am among the first visitors to the new camp, which sits on the edge of a high escarpment with views across the acacia-dotted plains to faraway Mount Kenya. Kudu and zebra graze among the 12 stylishly ap­pointed tented suites while hyraxes sun them­selves around one of Africa’s most picturesque swimming pools. Northern Kenya’s conservancies have helped pastoralists, like this Samburu herdsman, develop a sustainable coexistence with the local wildlife.

My guide this time is Samuel Brown, a Sam­buru clad in traditional feather headdress and scarlet toga who’s a fount of information about the local flora and fauna. Like a spiny succu­lent called “elephant chewing gum” because pachyderms love to chomp it. Or the fact that harvester ants never leave their tired or injured comrades behind, but rather piggy-back them to the nest to recuperate. And how the dainty, doe-eyed dik-dik antelopes mate for life.

With his keen eyes Brown spots a dead im­pala, its carcass hung over an acacia branch. This can mean only one thing: a leopard had killed the animal and placed it in the tree for later feasting. There’s no sign of the cat in mid-after­noon, so we return at dusk and wait. And wait. And wait. Finally, in the pitch darkness, a pair of glowing amber eyes appears in our torch light, followed by a flash of spots through the grass.

The leopard, which Brown identifies as a young female, waits for us to leave so she can enjoy the spoils of her hunt in private. But af­ter an hour she gives up and slinks off into the dark. I figure we’ll call it a night. Instead, Brown says, “Let’s check the tree.” Easing our jeep be­side the big acacia, he shines a light through the thorny foliage. Sure enough, the leopard is there, not ten meters away. Fangs bared, snarling at us, ready to protect her meal by all possible means.

“Not even I see that every day,” Brown tells me as we drive back to camp. I’m not surprised. You get a lot of that—the weird, the rare, and the unexpected—in the vast untouched wilderness of northern Kenya. 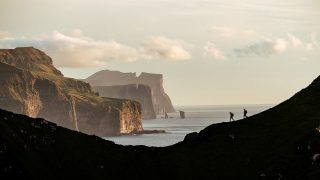 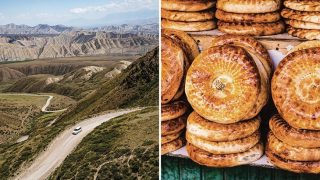 Discovering the Flavors of Kyrgyzstan

Road tripping across the mountains and valleys of this Central Asian nation proves the perfect way t...