Berlin’s central-most district may have lost its edge, but the Mitte of today has plenty else to commend it, from revamped museums and design-forward restaurants to some of the German capital’s most compelling galleries. And if you know where to go, you can still catch glimpses of its bygone bohemian spirit

A decade ago, when Berlin mayor Klaus Wowereit famously described his city as “poor, but sexy,” he might well have added that it was in a state of mad flux. The Wall had fallen 15 years earlier, and Berlin had emerged at the forefront of Europe’s avant-garde scene: gritty, cheap, and home to a thriving youth culture. Much of its energy pulsated out of Mitte, a district located right in the middle, as its name suggests, of the reunified German metropolis. Before 1989, this was East German territory. After the Wall came down, Mitte (or at least the part of it lying east of the River Spree) became the hub of a bohemian art movement.

Shabby and derelict after years of stringent communist rule, Mitte attracted throngs of young artists who moved into the empty buildings that had been confiscated by the East German government and left unclaimed by their original owners after reunification. Teamed with the new government’s open, if not accepting, attitude toward squatters, Mitte’s low cost of living and strong, edgy liberalism proved to be the perfect ingredients for a creative surge.

“Mitte was just going off,” recalls Australian architect Wesley Hindmarch, who lived there in 1995. “There was a raw, pure energy fueled by this incredible youth culture flooding in from around Europe. Berlin was about freedom and affordability, values that allowed artists to thrive and be part of the recuperation of the city.”

Mitte’s art movement continued to flourish right through to the aughties, helping to reinvent Berlin as one of the most dynamic cities in Europe. Between 2006 and 2010, I lived in Mitte for three months of each year. My scientist husband worked in Berlin and we had an apartment on Münzstrasse, one of Mitte’s main shopping streets. The neighborhood was filled with dark bars, graffitied walls, and buildings riddled with bullet holes. We would spend our weekend days visiting art exhibitions and film screenings, and our nights in seedy watering holes. Our local haunt, which we dubbed the Russian Bar after its Slavic theme and cheap vodka shots, thrived on Saturday nights with impromptu gigs. Sometimes we would brave the 20-minute walk to Tacheles, a decrepit multistory building that was constructed in 1907 as a department store and later used as Nazi Party offices. Communes of squatting artists took over after the fall of the Wall, filling it with graffiti and broken bottles. We came to hang out at a bar with glassless windows and mismatched chairs that heaved with the social misfits who had successfully resisted eviction and made Tacheles their home.

Then, almost overnight, it all started to change. Boutique hotels began taking up space in Mitte’s prewar apartment and office blocks; one opened in the former KGB headquarters. Fashion and accessories designers flooded in from around Europe and opened little shops. Organic grocers multiplied. Wine bars opened. Hugo Boss moved in. Rents went up, up, up.

Last year, Tacheles was sold to a bank with plans to convert it into luxury residences. The street opposite our old apartment, Rosa-Luxemburg-Strasse, which was named after the Marxist theorist and socialist darling, and which I used to be too afraid to walk down alone at night, now boasts modish shops that sell Fendi jackets for almost US$8,000 a pop. Our Russian Bar has been replaced by a designer hotel called Mani.

Mitte the edgy has become Mitte the chic. 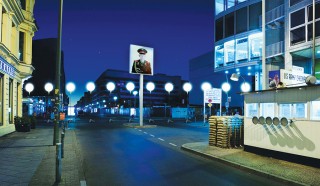 Germany’s once-divided city is celebrating the occasion, November 9, with a host of events.