After an absence of three years, the Ritz-Carlton has resumed operations in Hong Kong, this time far above the madding crowds of Kowloon. Welcome to the world’s highest hotel (for now)

The tripod-mounted telescope in the corner of my suite seems a touch voyeuristic. But when I point it to the neighboring apartment towers of West Kowloon, there’s nothing much to peep at: the buildings still appear minuscule and remote. Ditto for the six-story cruise ship moored below me, which only barely fills the lens. And the city across the harbor? For all its bristling skyscrapers, it looks like an urban planner’s diorama, a Legoland exhibit, a Lilliput.

Such is the perspective from the 112th floor of the newly opened Ritz-Carlton Hong Kong, which, with another six stories above me–rising to a dizzying 490 meters–is now considered the world’s highest hotel. It occupies the top 17 floors of the International Commerce Centre (ICC), itself the world’s fourth tallest building, a gently tapered mega-tower that dwarfs everything around it. On overcast days, hotel guests can literally be up in the clouds; if you check in, drop your bags in your room, and head straight back down to street level, you’ll have traveled almost a kilometer. (Mind you, it’s a quick kilometer: high-speed elevators zip up to the 103rd-floor lobby in just 52 seconds.)

Though I’ve never had a head for heights, the elevation here is downright Olympian. I quickly decide that my favorite spot in my room is the corner projection where the floor-to-ceiling windows meet at a 60-degree angle. Pressed in there against the glass, my peripheral vision stretching from the eastern hills of Kowloon to the northwest waterfront of Hong Kong Island, I feel the delectable frisson that comes with having the world at your feet.

“It’s like you’re floating,” is how the hotel’s general manager, Mark DeCocinis, puts it as we talk over coffee at the all-day Lounge restaurant, one level below the lobby. “The views still take my breath away.” But DeCo-cinis is quick to point out that height isn’t everything. “It’s an attraction, sure, but it’s not what we are really about. And it’s only a matter of time before someone builds an even higher hotel. No, the real guest experience here, and what will keep people coming back, is all about service–engaging, flawless service.” To that end, DeCocinis interviewed each of the hotel’s 520 incoming employees himself.

Details such as a leather headboard and goose-down duvet add to the plush comforts of a room on the 109th floor.

Technically speaking, about 30 percent of them aren’t new employees at all. They’re returnees–staff from the old Ritz-Carlton that stood in Hong Kong Island’s Central district for 14 years, until it was closed in early 2008 to make way for a new office tower. During its short-lived run, the 216-room hotel, an intimate, gracious establishment full of English antiques, gilt-framed mirrors, and napped draperies, was rated one of the city’s best lodgings. Toscana, its Italian restaurant, had an equally exalted reputation among diners.

Fans of that Ritz shouldn’t expect the same old-world feel at its new incarnation. Nor will they find the sort of subtle minimalism espoused by smaller properties like the Upper House (across the harbor at Pacific Place) or even the Park Hyatt Shanghai, which held the title of the world’s tallest hotel until the Ritz-Carlton opened for business in March. Instead, the governing aesthetic here is “modern classic,” to use the words of Suseam Teo, a partner at LTW, the Singapore firm responsible for the look of the 312 guest rooms and lobby areas. “We wanted to take the opulence that the Ritz-Carlton was known for and make it contemporary, playing off the geometry of the archi-tecture and the grid patterns of the cityscape outside,” Teo notes. “It’s stately, masculine, but with a coziness that complements the views.”

Those views–which from my harbor-facing suite extend almost directly across to the top of Victoria Peak, only 60 meters higher than the ICC–are what preoccupy me for most of my short stay. Yet the interiors are certainly sumptuous enough. My bed is swathed in a goose-down duvet, with a phalanx of pillows propped against the bronze-hued leather headboard. Lacewood paneling and mirrored fretwork cover the walls; there’s an onyx sink top in my bathroom. And amenities abound, from the aforementioned telescope and automated curtains that open whenever I walk into the room, to a Blu-ray player, huge flat-screen TV, iPod dock, and fancy British toiletries.

A hostess at the hotel’s cacao-themed Chocolate Library.

The hotel’s restaurants were crafted by a different firm, Tokyo’s Spin Design Studio, whose mission seems to have been to out-dazzle the panorama filling the double-height windows. A walkway of illuminated panels (in red, blue, or gold, depending on which section you’re in) connects the three main dining spaces on the 102nd floor, skirting glass cases filled alternatively with wine bottles (more than 8,000) and shimmering strips of Perspex. In the Lounge, a pair of immense, hyperbo-loidal chandeliers, each assembled with 50,000 pieces of handblown crystal, dominate the decor. I’m not sure what qualifies as “over the top” at this altitude, but it’s certainly an eyeful. Then again, what do I know? Judging from the two-month-long waiting lists for outside guests at both Tosca, the Italian dining room, and Tin Lung Heen, its Cantonese counterpart, these are destination restaurants in the making. I don’t get the chance to eat at the latter, but I do manage a dinner at Tosca, where Neapolitan chef Vittorio Lucariello turns out fabulous things like stone-baked lamb chops crusted with pistachios. No wonder it’s so hard to get a table.

While skyscraper hotels are not an entirely Asian and Middle Eastern phenomenon–the Mandarin Oriental in New York, for one, ranges from the 35th to 54th floor of an 80-story tower–it is in these regions that the trend is most pronounced. Shanghai is home to two of the world’s highest hotels–the Grand Hyatt, atop the 88-story Jin Mao tower, and its younger sibling the Park Hyatt–while Dubai has a raft of its own, from the Burj Al Arab to the Rose Rayhaan. More are on the way. During my stay in Hong Kong, I hear that the Ritz-Carlton will hold its record-breaking title only until 2014, when a hotel in Shanghai is slated to top out at 543 meters.

Of course, not every traveler wants to be so removed from life at street level; there’s a certain disengagement from the urban environment that comes with roosting at the top of a skyscraper. At the Ritz-Carlton, however, “street level” is a 13-hectare swath of reclaimed land known as Union Square, which, apart from the ICC, includes several residential towers, the sprawling Elements shopping mall, and direct access to Kowloon Station. It’s not the hurly-burly of Tsim Sha Tsui or the neon-lit backstreets of Central, but for guests looking for a more immersive experience, those neighborhoods are only a subway stop or two away.

Nor is one likely to feel like an exile at the Ritz-Carlton’s sleek rooftop bar, Ozone. On the Saturday night that I visit, the place is buzzing with fashionable young locals and expats, lured aloft not only by well-crafted cocktails, but also by the chance to preen and schmooze and take in the mind-blowing vistas at–you guessed it–the world’s highest bar.

The hotel’s gym and pool are on the same level, and no doubt merit superlatives of their own. The weather is closing in the next day when I go for a morning swim. Images of a tropical blue sky loop on the LED screens that cover the ceiling above me, but beyond the windows, a gray mist is swirling. After toweling off, I decide to brave the elements and head outside to the adjoining terrace, where I immerse myself in a hot tub. And there I sit, almost half a kilometer above Victoria Harbour, my bottom half submerged in piping hot water, and my head, quite happily, in the clouds. 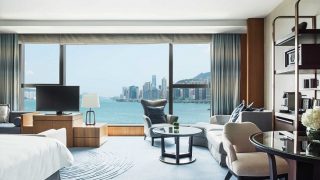 Starting on December 22, arrivals from all regions except Mainland China will have to self-isolate a...