Kolkata’s teeming streets yield some of most flavorful food in India, especially when you have a homegrown chef as your guide

Under a tent of blue plastic on a back street in Kolkata, Jetendra Pandit is making puchka, golf-ball-size orbs of crisp semolina pastry stuffed with a savory mixture of potato, chickpeas, tamarind paste, and chaat masala. It’s 8 p.m., and the burly cook is working from a single light bulb and gas flame, throwing shadows across the pavement stones. We drove for an hour to reach his stall, dodging the potholes, cows, and rickshaws that litter the suburban streets of the West Bengali capital. But it’s well worth it. In a city famed for its puchka (known elsewhere in India as gol gappa or pani puri), Pandit’s are legendary; this sidewalk stall has been in his family for three generations.

“This is the ultimate Indian street food,” declares Gaggan Anand, the 35-year-old Kol-kata-born chef behind Bangkok’s acclaimed Gaggan restaurant, as he pops a seventh puchka whole into his mouth. “This is what fuels my inspiration; it is the essence of my own cooking.”

An affable bear of a man with a crop of silky hair and a patch of beard on his chin, Anand thundered into Southeast Asia’s gastronomy scene two years ago with his “progressive” take on Indian cuisine, which applies molecular kitchen techniques to the dishes that sustained him as a child. Keen to show off his culinary roots, Anand, who I first met in 2007 shortly after he moved to Bangkok to cook at a contemporary Indian restaurant called Red, has promised to take me on the ultimate Kolkata food safari.

The day begins with breakfast at Gupta Brothers, a sweets shop selling elaborate, multihued confections made from reduced milk alongside savory treats served in banana-leaf cups with wooden spoons. Standing at the busy counter, we devour squares of sandesh—cottage cheese and sugar baked into a crème brûlée-like pudding—and, my favorite, dohkla, a batter of fermented lentil that is steamed into a cake and topped with tamarind and date chutney, curry leaves, grated coconut, and mustard. It’s also one of Anand’s favorites; at Gaggan, he puts the same lentil batter through a siphon to aerate it, then microwaves it for 30 seconds before teaming it with frozen coconut and coriander foam. It’s a bit of kitchen wizardry that transforms a simple street snack into haute cuisine.

Earthy, light, and fragrant with an emphasis on river fish, lentils, and rice dishes, Bengali cooking is a world away from the rich cream- and butter-based curries and leavened breads of Punjabi and Mughlai cuisine. “It’s all about balancing sweet, sour, pungent, and spice,” Anand tells me over a plate of minced banana flower at Kewpie’s Kitchen, an unassuming family-run restaurant tucked into a red-trimmed house off Elgin Road. “Wedged in between Southeast Asia and the rest of India, it has characteristics of both.”

Joining us for lunch is Kewpie’s owner Rakhi Purnima Dasgupta and a few of her friends, who are passionately debating the origins of Bengali cuisine. Some say its basis comes from the Punjab, others say southern India, or that it’s a blend of all the cultures that make up this fascinating metropolis. 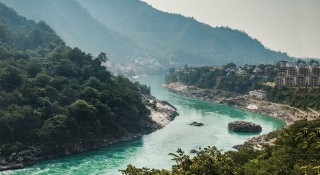