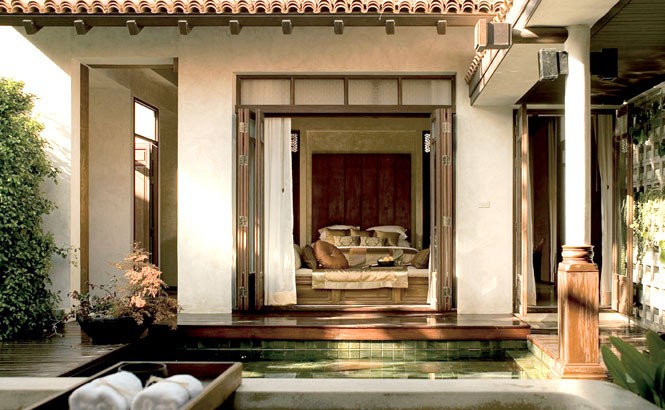 Overlooking the Gulf of Thailand from its perch on the east coast of Koh Samui, the Langham Place, Samui at Lamai Beach (66-77/960-888; kohsamui.langhamplacehotels.com; doubles from US$242) comes with 77 villas and suites set in traditional Thai buildings with a modern twist, as pictured above. While some accommodations have private pools, you’ll want to take a dip in the resort’s ocean pool, located 200 meters out into the sea and surrounded by stilted salas.

The second Hong Kong address for the Swire group, East (852/ 3968-3968; east-hongkong.com; doubles from US$127) opened in Quarry Bay on Hong Kong Island last month. Billing itself as a “lifestyle business hotel,” the property has 345 minimal rooms and suites decked out with the latest technology, offering either harbor or city views.

At the end of March, Sankara Hotel & Spa Yakushima (81-997/473-488; sankarahotel-spa.com; doubles from US$434) will welcome guests on Japan’s World Heritage–listed Yakushima Island, renowned for its ancient forest and bountiful marine life. Blending in with its surrounds, the 29-villa hotel also features a French restaurant and an intimate spa.

Nestled in New Zealand’s Tongariro National Park, the Hilton Lake Taupo (64-7/378-7080; hilton.com; doubles from US$185) comes with 113 modern rooms; those in the heritage wing, a grand 1889 building once occupied by the Terraces Hotel, feature private balconies overlooking the country’s largest lake. Don’t miss a swim in the pool, which draws its water from thermal springs nearby.