Above from left: Derelict artillery on Madang’s waterfront recalls less
peaceful times; cruising up to one of the countless islands in Astrolabe Bay.

For centuries, Papua New Guinea attracted only the most daring of adventurers: people like the Leahy brothers of Australia, who made first contact with the highland tribes of Wahgi Valley while prospecting for gold in the 1930s; and Amelia Earhart, the famed American pilot who vanished after departing from the settlement of Lae during her ill-fated attempt to circumnavigate the globe. The majority of visitors to PNG today are cut from the same intrepid cloth. The Kokoda Trail and Sepik River usually top their lists, though going for a stroll in Port Moresby—the island nation’s crime-riddled capital—is enough to rattle even the most seasoned traveler’s bones. But there is one place in the country that defies these expectations.

Madang—both the town and the province —is the showpiece of PNG’s beleaguered tourism industry. Backed by a range of dramatic mountains (including Mount Wilhelm, the country’s highest peak at 4,903 meters), the terrain tumbles down to lush lowlands along New Guinea’s northeast coast, where the Bismarck Sea washes against fringing coral reefs and mangrove tidelands.

“We have more to offer than the rest of the Pacific put together,” says Madang stalwart Sir Peter Barter, a former provincial governor and current chairman of the Madang Visitors and Cultural Bureau. “This province alone has 173 linguistic groups, which means 173 cultures, and these are diverse cultures: no two are the same. We have scores of uninhabited islands and behind us, mountains that reach 12,000 feet high. There’s nothing like that anywhere in the world.”

Barter, who also owns and runs PNG’s largest tourism company, Melanesian Tourist Services, is understandably effusive. But it doesn’t take much wandering around Madang’s walkable little provincial capital to appreciate its billing as “the prettiest town in the South Pacific.” Set on a peninsula overlooking the isle-studded waters of Astrolabe Bay, Madang is—cinderblocks and rusty tin roofs notwithstanding—a pleasant place, with verdant public gardens, lily-padded lagoons, comfortable resorts, and a population of some 28,000 of New Guinea’s most  convivial folk.

“Our customs tell us we must be friendly to everyone no matter what the color of their skin. In Madang, it has always been like that.”

For most foreign visitors, the main draw lies offshore. Part of German New Guinea until 1914 when it became an Australian protectorate, Madang was invaded and occupied by the Japanese during World War II, and remained a center of heavy fighting until its recapture by Allied forces in 1944. Apart from rusting plane wrecks on abandoned airfields outside town and throughout the province, reminders of that conflict can be found in the warm waters of the Bismarck Sea, where sunken, coral-encrusted ships and planes by the dozen attract divers from around the world.

“I’ve worked in Palau and Cairns and many other dive spots,” says Yayoi Yamamoto of Niugini Dive Adventures, “and Madang is the best. You can visit the same site in the morning and the afternoon, and you will not believe the difference. At one time it is full of barracuda whirling around in circles, and another time you will see buffalo fish and sweetlips. That’s why I have stayed here for 10 years.”

There are countless other things to do and see in and around the city. To the north, Hansa Bay boasts six offshore volcanic islands and more than three dozen sandringed islets ideal for beachcombing and swimming. Game fishing provides another popular diversion, with currents carrying sailfish, wahoo, and yellowfin tuna within 100 meters of the shore.

Day tours are available to the villages of Bilbil or Kusen, where ecotourism projects have been established to showcase pottery making, local foods, and singsings—tribal dance performances. Or, for something unique even in PNG, one can head south to the Balek Wildlife Sanctuary. Used as a location for the 1996 Pierce Brosnan movie Robinson Crusoe, Balek is home to tropical forests bursting with orchids, butterflies, birds of paradise, tree wallabies, and a biochemical phenomenon in which sulfur stains not only the half-submerged caves that riddle the coast, but also the marine life that lives within.

“Walk along the water and you’ll find little turtles that are blue because of the sulfur,” says Michael Cassel, who was posted to Madang as a clerk with the former Australian colonial administration in 1964 and now owns Madang Lodge, a 75-room seaside resort catering mostly to expatriate workers and well-to-do New Guinean holidaymakers.

“I’ve occasionally thought about leaving, but for one reason or another I stayed,”  Cassel adds, peering across Astrolabe Bay. “Guess I’m here for good.”

“The country deserves better,” laments Sir Peter from the far side of a voluminous mahogany desk layered with hundreds of documents. “Papua New Guinea saw tremendous growth in tourism 30 years ago, and it continued for decades. But arrivals dropped off with SARS and 9/11, [and are yet to recover because of] ineffective tourism promotions and the inability of various government departments to work together.”

Of course, a reputation for lawlessness has also dogged the tourism trade since PNG’s independence from Australia in 1975, when what was once regarded as the most peaceful and orderly place in the South Pacific transformed overnight into one of its most violent and chaotic. This image problem is especially hurtful to Madang, which is statistically safer than many of the region’s better-visited destinations.

Cassel admits that Madang is not free of crime, “But where is? And if you take the initiative and say hello to people, they really appreciate it. The rules here are simple: respect given is respect given back.”

I decide to put his assertion to the test. Armed with a few words of Tok Pisin—a colorful creole of German, English, and indigenous Melanesian dialects —I catch a minibus into town and stroll through the produce stands at the main market. Despite a few curious stares, just about everyone I pass calls out “afternoon, boss” or “you alright?” It’s a breath of fresh air compared to the intimidation of Port Moresby.

Sam Aloi, a local bikman (big man) and prominent landowner whom I meet, chuckles when I tell him this. Madang, he says, has long been a cultural crossroads, accustomed to the comings and goings of strangers from foreign lands. “Our customs tell us we must be friendly to everyone no matter what the color of their skin. In Madang, it has always been like that.”

The next day, I return to the market and buy a handmade string bag called a bilong to carry my fins and mask. I then walk through a park shaded by mimosa trees, whose resident fruit bats (called blek bokis in Tok Pisin—literally “black boxes”) darken the sky at sundown. At a bridge across a clear stream, a group of kids are launching themselves into the water; they’re thrilled when I take their photos, and apoplectic with joy when I strip off my shirt and join them for a swim.

Afterward, I amble along a grassy headland where, for two kina a pop, women are selling freshly barbecued marlin steaks topped with rock salt and lime.  I buy myself a couple and settle in for an impromptu picnic, admiring the views across a perfect South Seas lagoon.

Madang’s natural hospitality is not limited to the mainland, as I soon discover on an excursion to Kranget, a horseshoe-shaped island two kilometers offshore. The sky is overcast but the water is perfectly translucent. Through the runabout’s Plexiglass bottom, I look down onto gardens of green and blue coral teeming with reef fish.

The moment I step ashore I’m transported into a tropical island paradise carpeted in impossibly green grass, quaint wooden lean-tos, and towering palms. The people are even more gregarious and welcoming than those back in town, at times actually lining up to shake my hand.

Getting There
National carrier Air Niugini (airniugini.com.pg) flies twice weekly from Singapore and Manila to Port Moresby, with same-day connections to Madang; 60-day tourist visas are available on arrival.

When to Go
PNG’s north coast is warm and wet year-round, with May to October offering the driest weather.

Where to Stay
Madang’s best place to bed down is Madang Lodge (675/852-3395; madanglodge.com; doubles from US$145). Set on the shores of Astrolabe Bay, this comfortable seaside property caters to all budgets, with accommodation ranging from fan-cooled rooms to two-bedroom cottages.

What to Do
Based at Madang Resort, Niugini Dive Adventures (niuginidive.com) offers diving and snorkeling excursions as well as harbor cruises and catamaran and kayak hire. Try Ecotourism Melanesia (em.com.pg) for tailored day trips ranging from village tours to bird-watching and trekking. 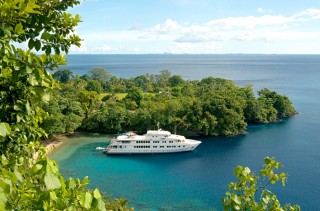