Fun is certainly the order of the day in South Beach, where the Raleigh, Delano, and Shelborne hotels—all dating from the 1940s—are unveiling renovations, and where the hotly anticipated SLS Hotel will make an April debut in the former Ritz Plaza, one of Collins Avenue’s Deco gems. The latter marks Philippe Starck’s first major design project in Miami since his white-on-white redo of the Delano in 1995, and will see the walls of every guest room covered with sketchily drawn trompe l’oeil canvases depicting French chateau–style millwork. And Starck isn’t the only big name here. The molecular cuisine of José Andrés will feature at The Bazaar, an offshoot of the Spanish chef’s restaurant at the SLS Hotel in Beverly Hills. As for the penthouse suite and a poolside bungalow, they’re by rocker-turned-designer Lenny Kravitz.

“Miami has really grown,” says SLS owner Sam Nazarian, explaining why the city is ready for his new property. “You just don’t see many U.S. markets outside of New York that have the cultural cachet that Miami does right now.”

Miami Beach’s restaurants have upped the ante, too, with chefs like London’s Alan Yau and New York’s Daniel Boulud, Scott Conant, and Geoffrey Zakarian all setting up shop here over the last few years. But homegrown talents are making names for themselves as well.

“Miami was never known as a food city,” says Andreas Schreiner, co-owner of a trio of venues enlivening the culinary scene here: the Asian-inflected gastropub Pubbelly, its sibling Pubbelly Sushi, and a Spanish mercat and bistro called Barceloneta. “But the influx of people Art Basel brings into the city demands that we change and evolve to satisfy more savvy palates.” All three of Schreiner’s restaurants are situated on one short block in Sunset Harbour, on the west side of Miami Beach, and all three present an inventive East-West mix of flavors—pot stickers filled with pork belly and scallions; shortrib tartare with apples and quail egg; sushi rolls of heirloom tomatoes and creamy burrata—to bustling and highly appreciative crowds.

Back at 1111 Lincoln Road, meanwhile, the 150-plus-seat Juvia opened on the garage’s penthouse level in February, with indoor and outdoor spaces overlooking the Deco cityscape and the ocean beyond. There’s also a lush, Amazon-inspired wall of greenery by vertical-garden designer Patrick Blanc, who also created the verdant lobby installations at Hong Kong’s Hotel Icon. The seafood-focused menu, a mix of Asian, South American, and French influences, comes to the table courtesy of chefs who trained in the kitchens of Daniel Boulud and Nobu Matsuhisa (who also has a Miami outpost)..

A Dazzling Exhibition in Singapore with Van Cleef & Arpels

Up to 450 jewelry pieces by Van Cleef & Arpels will be on display in an exhibition at Singapore's Ar... 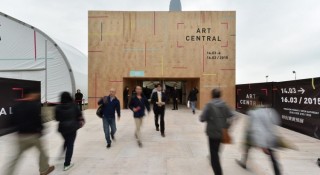 Art lovers will have their eyes set on Hong Kong this month as the city prepares to welcome a busy a...