In the quiet hour before dawn, I pad barefoot to the stern deck of our vessel. I’m planning a lonely sunrise—just me, a cup of tea, and Papua New Guinea. But I’m not alone. Every morning, at each of our ports of call, they’re here, and they remain well into the night. Watching us while we eat, talk, and swim. I can see them in the distance now, bobbing in their canoes, illuminated by the dull glow of our mooring lights.

Our 50-meter-long Australia-based cruiser, the True North, has been attracting a fair amount of attention on its annual voyage through the Solomon Sea. Whenever we anchor, Papua New Guinea’s eastern islanders come out to observe. They linger on rafts and dugouts around the back of the boat: mums, dads, kids, animals. They smile at us through lips stained bright red by betel nuts. The ship is certainly an impressive sight, though I suspect it’s the seven-seat helicopter parked abaft the bridge that’s causing the most stir.

Our cruise began in Kavieng, the provincial capital of New Ireland, one of the 150-odd islands that sit off the coast of the mainland. Home to some 10,000 people today, Kavieng is popular for its natural and “manmade” dive sites—wrecks from World War II pepper its waters. Over the next week, the ship will carry us more than 1,000 kilometers to the southwest. Our final destination will be Alotau, at the southeastern tip of the New Guinea mainland. It was here, in 1942, that Japanese forces made a bid to capture the town’s air base from Allied forces and push through to Australia. The ensuing Battle of Milne Bay was the first land defeat of Japan’s Pacific campaign.

But before we disembark to tour the battle memorial in Alotau, we’ll cruise past some of the world’s most remote and undeveloped islands: New Britain and the Duke of York Islands (both part of the Bismarck Archipelago), the tiny atolls of the Lusancays, and onward through the D’Entrecasteaux Islands. Here, dense rain forest extends as far as the eye can see, broken only by smoldering calderas, a reminder of New Guinea’s place on the circum-Pacific volcanic belt known as the Ring of Fire.

Germany, Britain, and Australia governed Papua New Guinea in succession from the late 19th century until independence in 1975. But much of the country remains removed from outside influences. Tourism is virtually nonexistent in the capital Port Moresby, thanks to its unsavory reputation. This is particularly true in the eastern islands; in New Ireland, there’s no tourist infrastructure to speak of aside from Kavieng’s handful of small hotels. The True North, the first cruiser of its kind to ply these waters, only makes this voyage four times a year, and each time, it visits different islands and villages.

Life onboard is far removed from the big cruise ship philosophy. There’s no cabaret, no casino. Many of the passengers have a personal link to the area, including a number of Australians who have come to see where their fathers or grandfathers fought during World War II. One, an 88-year-old gentleman from Perth, was himself stationed in Rabaul and Jacquinot Bay in the early 1940s.

Our journey is not so much about intrusion as it is about observation, and even involvement at times. Not long after departing Kavieng, we disembark at a village where a young child has fallen gravely ill. My fellow passengers and I—there are only 36 of us—decide to hand over a few dollars each for medicine.

As thanks, her family slaughters a pig and holds a ceremony for everyone on the boat. The crew spend hours entertaining the local kids, playing ball games, making poodles from pink balloons, and passing out parcels of clothes. Over the five years that the True North has been visiting these waters, its employees and guests have also donated books and stationery and helped finance schools.

The raw beauty of these islands is difficult to comprehend. Only the Amazon Basin compares when it comes to the diversity and significance of flora and fauna. Papua New Guinea is home to more than 200 endemic mammal species, including the long-beaked echidna, the bronze quoll, and a veritable bestiary of unique rodents and reptiles. Monitor lizards here can grow to more than two meters in length. Forget your bug repellent and you’re at risk of being swarmed by the region’s 400,000-species-strong army of insects. If you’re lucky you may see the world’s largest butterfly, the Queen Alexandra’s Birdwing, so big that when it was first collected in 1906 it had to be brought down by a shotgun blast.

The islands are also home to 750 types of birds—hornbills and birds of paradise among them —and have a greater wealth of orchids than anywhere else in the world. Around 3,000 variations of the flower have been recorded so far, and new ones are discovered every day; a 2006 research trip organized by the World Wildlife Fund found eight unidentified species of orchid in a single week. When you’re in this part of the world, you can’t help but feel as though anything, and everything, might be lurking in the shadows.

The forest is so alluring that at times I have to remind myself that I’m on a cruise and should spend some of my time in the water. I’m glad I take the plunge.

One day, we anchor off the Luscancay Islands. With its shallow draft, the True North is able to enter small coves, lagoons, and estuaries that are inaccessible to larger ships. We stop directly above the kaleidoscopic Star Reef. The waters are crystal clear; divers report back that they could see the True North bobbing on the ocean’s surface from 50 meters below. I hardly need my mask to see the coral, not to mention the obscenely large fish that come up to greet me when I dive in. A 282-kilogram black marlin was famously hooked in these waters in 1979. I don’t see anything quite so monstrous, but other passengers on the boat reel in 20-plus-kilogram yellowfin and dogtooth tuna, alongside huge mackerel and wahoo. One morning I happen to be snorkeling with the ship’s marine biologist when two orcas swim by. We follow them for about an hour—they’re so tame that we’re able to come within a meter of them. When we’re not swimming or fishing, we spend the afternoons spotting turtles, dugongs, and the dolphins that cavort in the True North’s bow waves.

Life onboard is a casual affair. We walk barefoot across the boat (shoes are not allowed) before retiring to our comfortable cabins, whose design is more functional than fashionable. Meals revolve around the catch of the day—a big tuna haul feeds us for a couple of days—alongside fresh fruit and vegetables purchased from the villages we visit. In the afternoons, we sit around long tables and listen to the crew talk about the communities we’ll be visiting. The resident marine biologist shows us photographs of the various sea creatures we chanced upon that day. We sit for hours, in awe. The quiet envelops the boat as the dark descends, and the mooring lights cast their eerie glow over the water once more.

North Star Cruises (61-8/9192-1829; northstarcruises.com.au) will operate four seven-night Adventures In Paradise trips around Papua New Guinea aboard the True North in 2009, departing November 7, 14, 21, and 28. Cruise packages start from US$7,612, including all meals, excursions, and chartered flights between Kavieng or Alotau and Cairns, Queensland. 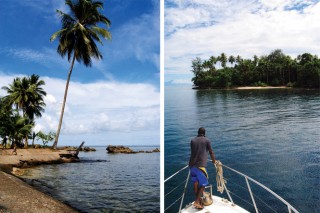