A day in the life of Mauritius’s unsung capital, Port Louis

En route to the Mauritian capital back in 1978, my taxi driver, a garrulous fellow with a knack for metaphor, described Port Louis as “a wasted old woman musing on lost youth.” And the tropes kept coming as we wound along the island’s west coast. “They ought to dip her in the sea, give her a lifting, and start all over again!” A lifting—that’s the local Creole for “face-lift,” and Port Louis in those days, 10 years after Mauritius declared its independence from Britain, was indeed in dire need of a makeover.

What a difference three decades makes. Cradled by the Moka Mountains at the head of a deep, natural harbor, Port Louis today is a sprawl of concrete facades and glinting office buildings, much of it the product of a building boom that kicked off in the 1990s. It may never win a beauty contest, but the city (pronounced locally as por-louee) is no longer the tumbledown Indian Ocean backwater it once was. Colonial buildings in the old part of town have been spruced up, while nearer to the water, the yawning, trash-filled gullies and dockside debris of yesteryear have been replaced by the smart Caudan Waterfront, a pedestrian complex complete with a 24-hour casino, cinemas, a craft market, a broad promenade, and air-conditioned shopping malls.

For those tourists who do leave the beachside confines of the island’s luxury resorts for a taste of “real” Mauritian life in the capital, Caudan serves as an obvious entrée. But whenever I visit town from my home of five years in Balaclava, a 20-minute drive to the north, I start on the other side of the gridlocked avenue that divides the harbor area from the rest of the city.

The business district of Place d’Armes, shaded by majestic royal palms, is the old city’s showpiece. Here, visitors linger at the foot of a bronze statue of Bertrand-François Mahé de La Bourdonnais, the celebrated French governor who founded this city in 1735. Nearby in front of the 18th-century Government House is another statue, this one of a stern-looking Queen Victoria, a reminder of Britain’s rule here from 1810 to 1968.

It’s a more chaotic scene in the narrow streets around Place d’Armes. Hawkers spread a jumble of East-meets-West wares across sidewalks made treacherous by gaping holes: heaps of knock-off Dior jeans and cheap Primark T-shirts, and Chinese-made auto parts are arrayed incongruously beside multicolored plastic tableware and pirated DVDs. Anything goes, and you always find a bargain, whether it’s beachwear or a bunch of dried medicinal herbs. Better still for souvenir hunters is the bustling Central Market, where stalls stock woven table mats, textiles, and all manner of keepsakes involving the dodo, the island’s most famous (albeit long-extinct) bird.

There are havens amid the mayhem. One of my favorite roosts is La Flore Mauricienne, near the pretty Port Louis Theatre. Founded in 1848, this is the country’s oldest restaurant, as popular for its Creole cuisine as for the people-watching opportunities afforded by its elevated terrace. On this April morning, the air is warm and moist when I take a seat and order an espresso. I see suited gentlemen hurrying to work and dark-skinned Creole youths lolloping by in baseball caps. Elegant Indian ladies swathed in gorgeous saris glide past chatting on mobile phones, and Chinese shop girls negotiate the sidewalks in high-heeled shoes.

The Photography Museum, concealed down a cobblestone cul-de-sac nearby, is another of my haunts. Scenes of old Port Louis adorn the whitewashed walls of this restored 18th-century building, whose owner, Tristan de Breville, has spent a lifetime collecting Mauritian memorabilia. Tristan is feeling grumpy today. “There’s no planning in this city,” he mutters, complaining about the traffic. “Remember the old days when there were plenty of places to park?” I nod knowingly, choosing not to tell him about my hassle-free journey into town by bus.

Shrill cries of “Taxi madam!” and touts whispering, “Come, I show you cheap spices,” accompany my short trek to the Company Gardens, the city’s only shaded park. Laid out by the French East India Company in the 18th century, the gardens are something of a red-light district come night. But during the day, they offer an attractive enclave of banyan trees, fountains, and more statues, including one of Mauritius-born sculptor Prosper d’Épinay.

I follow my nose to Chinatown, passing hole-in-the-wall snack bars and shophouses filled with textiles and the heavy scent of incense. The pace is fast and furious, with roadside cooks dishing up noodles, fish-ball soup, and fat sesame buns to famished lunchtime workers. Ladies from Barclays Bank in blue-and-violet-striped corporate blouses form orderly queues with Indian matrons, and I swear the gray-haired man over there is Robert De Niro. This is confirmed when someone tells me that the actor is holidaying at some hideaway on the east coast.

I shall never know if De Niro made it to the ramparts of La Citadelle (a.k.a. Fort Adelaide), an abandoned British fortress set atop a hill at the back of town. It overlooks Champs de Mars, originally a French military ground and now home to the nation’s most popular sport—horseracing. From May to June, Ascot meets Longchamp with celebrities from Hollywood, Bollywood, and the horseracing world joining thousands of local pundits and punters to chant “Allez, allez!” as their favorites thunder round the 1,400-meter track toward the finish line.

A day in town drains you dry, but when the warm ocean breezes beckon I like to hop aboard a catamaran for a cruise around the harbor, if only to remind myself that while the city’s skyline may change, the mountains never do.

Come nightfall, the Caudan Waterfront draws local families, party owls, and buzz-seeking tourists to alfresco food courts, restaurants, and pubs. At the casino, I play roulette, win and lose, and win again before realizing that it’s time to eat.

If there’s one place for sheer indulgence, then it has to be Le Courtyard Restaurant, where chef-owner Patrice Dumont turns out fabulous French fare with a Creole twist.

At 9 p.m. I realize that the rest of Port Louis has shut down, and along with it my bus service back home. I hail a taxi. “Early mornings, early nights. This is Port Louis,” the driver sighs as we drive into the tropical night, leaving the revelry of the waterfront behind us.

Port Louis’s top business hotel, the waterfront Labourdonnais (Caudan; 230/202-4000; labourdonnais.com; doubles from US$237), is a decent enough place, but it’s at its beach resorts that Mauritius really shines. Choose from any number of luxe playgrounds; closest to the capital is the Oberoi Mauritius (Baie aux Tortues; 230/204-3625; oberoihotels.com; doubles from US$1,045), a 15-minute drive up the coast.

There’s plenty to explore among the 170-odd boutiques at the Caudan Waterfront (Old Pavillon St.; caudan.com), but for a taste of Port Louis’s more traditional retail scene, join the throngs at Central Market (Farquhar St.). Be sure to admire the memorabilia at Tristan de Breville’s Photography Museum (Rue du Vieux Conseil; 230/ 211-1705) before taking in the city’s modern skyline on a catamaran harbor cruise (maeva-group.com). 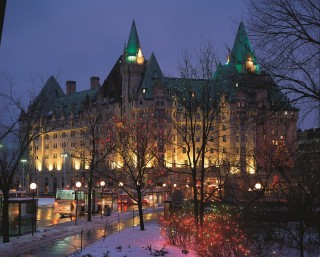 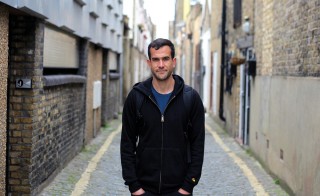 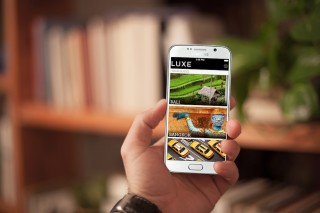 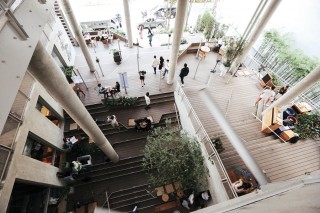